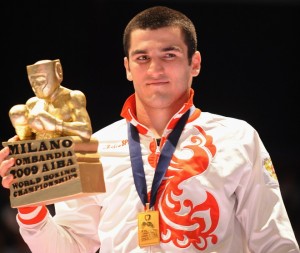 Russian light heavyweight prospect Artur Beterbiev vowed to show power and movement during Saturday’s bout with ex-IBF titleholder Tavoris Cloud, despite having not gone beyond four rounds and faced only one boxer with a winning record.

As it turns out, the 29-year-old Russian only required the power — and just over a round — to obliterate his American opponent.

Berterbiev floored Cloud three times in the first round, and dropped him for good, face-first, in the next for a second-round stoppage at the 38-second mark at Bell Centre in Montreal.

In the end, Cloud lay in a prone position and failed to beat the count of referee Michael Griffin after having absorbed a variety of blows, the last three being two successive left hooks and a finishing right cross.

In Round 1, Cloud was dropped a right hand, the again with double-left hook, and for a third time by a left hook just prior to the bell — all within the round’s final 45 seconds .

A resident of Montreal, Canada, who is promoted by Yvon Michel, Beterbiev improved to 6-0 with as many knockouts against Cloud (24-3, 19 KOs) just over a month after having scored a first-round knockout of Alvaro Enriquez.

The setback was the third straight for Cloud, 32, who has steadily deteriorated over the course of his past five appearances.

In his previous two fights, Cloud lost by unanimous decision to Bernard Hopkins, who dethroned him as IBF titleholder in March 2013, and by seventh-round knockout to RING champion Adonis Stevenson in his last fight in Sept. 2013.

Prior to facing Hopkins and Stevenson, Cloud won a disputed split decision in February 2012 over former beltholder Gabriel Campillo, who appeared to have outboxed Cloud after having been dropped twice in the first round.