From THE RING Magazine: Back into the cauldron 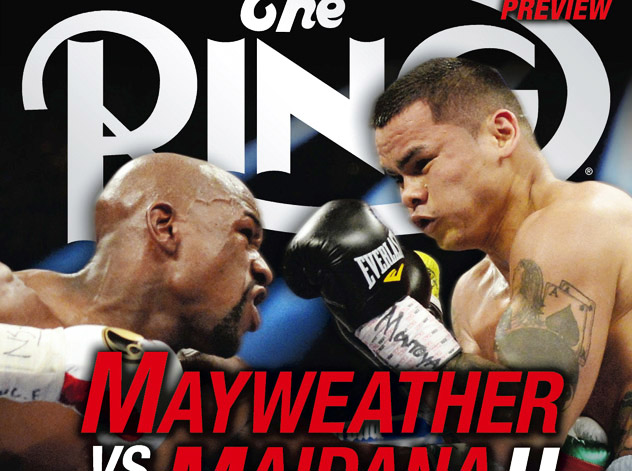 Note: This story appears in the October 2014 issue of THE RING Magazine, which has a 22-page preview package of the Floyd Mayweather Jr.-Marcos Maidana rematch Saturday in Las Vegas.

If Floyd Mayweather Jr.’s rich career has entered the legacy-building stage, it’s hard to know how we will one day judge his first fight with Marcos Maidana. It fell short of expectations, his and everybody else’s. It was supposed to be just another testament to his singular skill. Even he talked about delivering his ‘A’ game. But on any scale, it was B-minus work. Nobody proclaimed it as brilliant, not even him. Mostly, he endured, claiming a victory that entered the record book as a majority decision. A 5-4 vote from the U.S. Supreme Court is more convincing.

Without unanimity, there’s only more debate, especially in the contentious court of public opinion.

Despite another victory in Mayweather’s march to remain unbeaten and a huge payday, nothing was settled in the fight. It didn’t satisfy anybody, other than perhaps some of the Mayweather haters who want to see him lose. And Maidana got as close to pulling off that feat as anyone has since Jose Luis Castillo.

For the moment, forget about statistics that said Mayweather was more accurate, hence more effective. More on those stats later. His critics think they know what they saw. One of the three judges, Michael Pernick, scored it a 114-114-draw, which says he saw some of the same things. Mayweather, a 117-110 and 116-112 winner on the other two cards, appeared off-balance in the first couple of rounds. He was clearly shaken by a cut above his right eye in the fourth. It was a rare sight, a Mayweather few have ever seen. For the anti-Mayweather crowd, those early moments represented a chance to finally get a payoff on their pay-per-view dollars.

“I wanted to give the fans what they wanted to see, so I stood and fought him,” Mayweather said, almost cryptically, during a post-fight news conference at Las Vegas’ MGM Grand.

But why? Why in the world did the globe’s best boxer, a control freak, permit an opponent to do the dictating? At the very least, it was out of character. Maybe it represents the early signs of decline, an inevitability that might be the only barrier in his evident quest of the unbeaten standard. Or maybe it was just a bad night.

Enjoy this preview of “Back into the cauldron”? The full version can be read in the October 2014 issue of THE RING Magazine, which is on newsstands now.