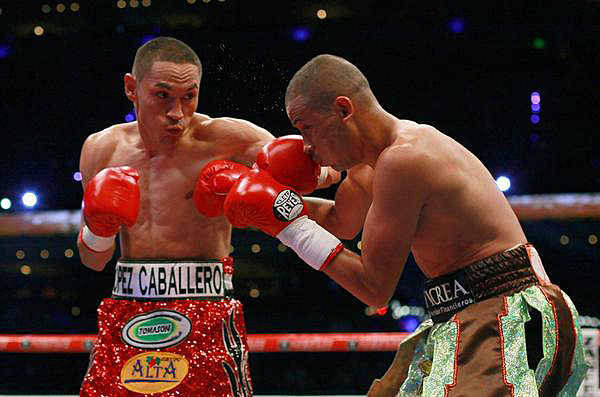 Estrada retained his WBO and WBA flyweight titles for the third time after raining down straight right hands on a defenseless Segura (32-1, 28 knockouts) along the ropes until referee Raul Caiz Jr. halted the fight.

The 24-year-old Estrada, who won the titles with an upset victory over Brian Viloria last April, began the fight at a faster pace than usual, electing to stand in range and trade punches. Segura’s wider shots landed occasionally, most notably with a wide southpaw left that tagged Estrada on the jaw.

Estrada’s superior technique, highlighted by a laser guided right hand that wouldn’t miss Segura’s unguarded face, gradually broke down Segura, who was once THE RING junior flyweight champion after ending the long reign of Ivan Calderon with two consecutive knockouts.

The right side of Segura’s face began to swell grotesquely in a manner similar to what he endured during his 2011 loss to Brian Viloria, which ended in an eighth-round TKO.

Estrada (27-2, 20 KOs), meanwhile, has won four straight bouts since losing a competitive decision to Roman Gonzalez in 2012 for the WBA junior flyweight title. Gonzalez (40-0, 34 KOs) captured THE RING’s flyweight championship a day earlier with a ninth-round TKO of Akira Yaegashi in Japan.

A rematch between the two remains the biggest fight in the division.

Earlier in the night, former two-division titleholder Jackie Nava defeated Alicia Ashley by majority decision to win the WBC female junior featherweight title. The scores were 95-95 even, followed by 97-93 and 98-92 for the 34-year-old Tijuana native Nava.

Nava had left the sport in September of 2012 after becoming pregnant, relinquishing the WBA belt she held at the time before returning in May with a seventh round knockout of Alys Sanchez.