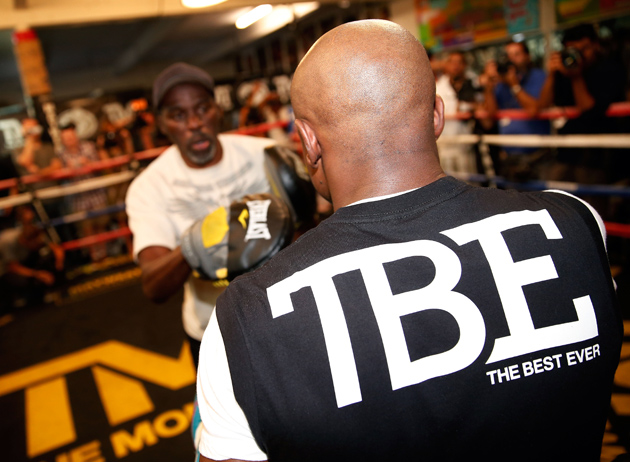 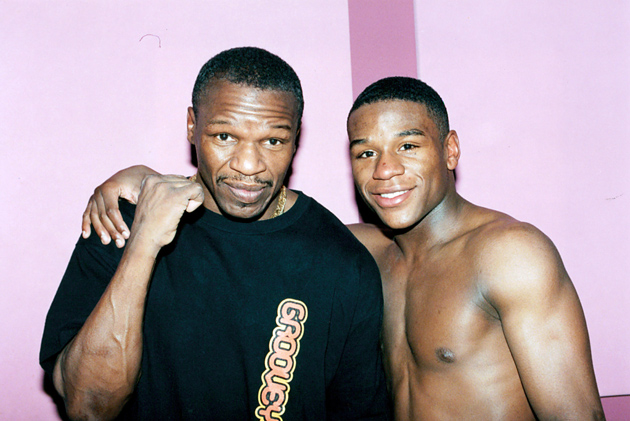 Floyd Mayweather Jr. poses with his father in early 1998, a few months before he won his first world title. Floyd Mayweather Sr. says his son has accomplished more than enough in the past 16 years to secure his legacy and shouldn’t continue fighting much longer just to appease critics. Photo / THE RING

In Floyd Mayweather’s eyes, his biggest challenge is not necessarily the one that will be standing across the ring from him on Sept. 13. Let him tell it, he’s already beaten Marcos Maidana once and doesn’t have to do it again. However, what stands to be his most daunting task isn’t a fighter at all. What Floyd Mayweather is fighting for is his legacy and place amongst the greatest pugilists of all time.

“I’m not just fighting the fighter anymore; I’m fighting the biased critics and fans,” Mayweather said during his recent media day at the Mayweather Boxing Club. With a little over a week to go before he looks to improve his unblemished record to 47-0 in a rematch against Marcos Maidana, the current pound for pound king has made it clear that this is no longer simply about beating the Argentinean. After all, the 117-111, 116-112 and 114-114 scorecards the judges turned in for their first affair wouldn’t necessarily warrant a rematch for any other fighter. But for Floyd Mayweather, any adversity he faces inside of the squared circle is met with skepticism as to whether or not he is finally falling off. Whether he likes it or not, that’s the way it is going to be until he retires from the sport.

“I won nine rounds against Maidana last time but I guess I have to win all 12 or knock him out,” he continues with a nonchalant shrug of his shoulders. “When you’re at the top people are going to take shots at you no matter what you do.”

Maybe he’s right. Mayweather is no longer up against the opponents looking to put a blemish on his pristine record. It’s no longer about if he wins so much as it is about how he wins. Not only does he have to win, he has to look marvelous doing so in order to climb the fictitious all-time great ladder where Sugar Ray Robinson, Muhammad Ali, Henry Armstrong, Willie Pep and Joe Louis all reside. Winning a majority decision against a man who was dominated by Devon Alexander is unacceptable for Floyd Mayweather. What he was supposed to do against Maidana is leave him battered, bruised and humiliated. Even if he turned in a virtuoso performance the second time around, would anybody be surprised? Better yet, would it improve his standing in the greatest of all-time debate? It’s not very likely.

“I don’t really worry about the critics like that,” Mayweather says when asked if he believes he could ever silence his skeptics. “I’m not on the internet or reading magazines about me.”

But don’t let him fool you, he does think about it. If he didn’t, why would he continue fighting? For Mayweather, the “TBE” label is not conjecture, hyperbole or a figment of his imagination. He calls himself that because he truly believes he is “The Best Ever.”

But chasing greatness is a no-win situation for an active athlete. No matter what you do today, the skeptics will tear apart tomorrow. Sometimes they have a valid argument. Other times, they are unwilling to give you your just due simply because revisionist history won’t allow a current athlete to surpass a memory.

For instance, no matter what LeBron James does for the rest of his career, there will always be those who remain steadfast that James and Michael Jordan’s names spoken in the same sentence amounts to some form of blasphemy. Fair or unfair, the reality is that greatness cannot be defined until you finally walk away from the sport.

Leonard Ellerbe agrees that Mayweather’s situation is similar to the LeBron/Jordan comparisons and that pitting fighters from different eras up against one another is often biased to the athletes of yesteryear.

“The critics tend to be a little harsh on where his place in history stands,” Ellerbe says. “They are comparing him to guys who fought 30 or 40 years ago and it’s not fair because he didn’t come up in that era. Michael Jordan was the old school dominant athlete whereas nowadays the athletes LeBron James is up against are bigger, stronger and faster.

“People try to intermingle the two eras but you just can’t. You have to judge today’s athletes on the hands that they were dealt.”

Legacy is an interesting thing in boxing. The chase to be recognized as the greatest boxer of all-time often leads to fighters never knowing when to pull over, take the keys out of the ignition and call it a career. Instead, most push the engine beyond its limits and run out of gas. All it takes is one ill-advised decision on the path to greatness and everything that you have worked so hard to accomplish can go up in smoke.

In Mayweather’s case, assuming that all goes as planned and he finishes his contract with Showtime in September of 2015 unbeaten, his record will stand at 49-0. If he were to walk away from the sport at the age of 38, what he accomplished would be unprecedented in boxing. Mayweather would be just shy of a 19-year unbeaten streak. That is something that no fighter – not Rocky Marciano, Joe Calzaghe, or Ricardo Lopez – can lay claim to. Floyd Mayweather would not only retire undefeated but will have maintained the longest reign of dominance in the history of boxing. Better yet, good luck trying to find a reign of dominance that compares to Mayweather’s in any sport.

But 49 is such an uneven number. Not to mention the temptation to surpass Rocky Marciano’s 49-0 record will likely prove to be a tantalizing dish. A one-fight deal for Mayweather to end his career at 50-0 could fetch an absurd amount of money. And we all know how much Floyd Mayweather likes money. But does he really need to end his boxing career at 50-0?

“It ain’t nothing left for my son to prove,” Floyd Mayweather Sr. contests when asked if his son needs to do anything else to improve his legacy. If he quit today it would be all right with me. I don’t think it matters if he ‘s 50-0.”

Floyd Mayweather finds himself in a peculiar position. As he heads towards what appears to be the end of the career, the path to remaining undefeated has very few visible obstacles left for him to conquer (unless you count Manny Pacquiao, but, well, you know). But there is one obstacle that every fighter – except Bernard Hopkins – has fallen victim to: Father Time.

“Let me tell you something, (when you’re at the top of your game) you better know when to leave that sh*t alone,” Mayweather Sr. explains as he watches his son address the media a few feet away from him. Although he and his son have had more than a few public fallouts, there isn’t a hint of envy littered in the elder Mayweather’s suggestion. “I say that because things just happen sometimes. When you get older, you don’t realize where your speed is going. You don’t see yourself slowing down. There are so many things that can happen that it ain’t worth the risk.

“When you have enough money to do what you want to do, take it and go about your business,” he continues. “The one damn fight you take when you probably shouldn’t have can turn your whole damn career around. All it takes is one loss and they’ll say ‘Floyd ain’t sh*t!'”

At this point in his career, Floyd Mayweather has nothing to win and everything to lose with each and every fight he takes. And in a sport where one punch can change your future, will Floyd Mayweather continue to risk all that he has accomplished in hopes of getting the recognition he believes he deserves?

They say all money isn’t good money, but when have we ever known Floyd Mayweather to turn down a dollar?