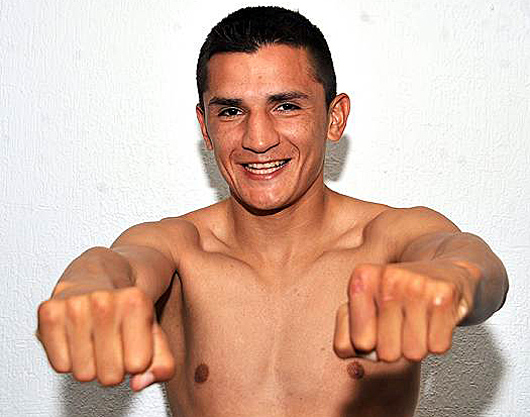 Daniel Estrada is pulling out all of the stops in advance of Saturday’s fight with WBC lightweight titleholder Omar Figueroa Jr. at the StubHub Center in Carson, Calif..

“I have been working very hard for the past five weeks,” said Estrada, 29, a winner of nine consecutive fights, including five by knockout.

“I’ve been running around at 4 a.m. in the high altitude of Mexico along with my team that includes Juan Manuel Marquez, Ignacio ‘Nacho’ Beristain and Raul De Anda and to know I am receiving the advice of one of the greats in the sport in Marquez gives me the peace of mind that I am doing the right thing for this upcoming fight.”

Estrada was last in action for December’s third-round knockout of Hugo Armenta, and last suffered defeat by split decision to Reyes Sanchez in Sept. 2010.

Figueroa, 24, from Weslaco, Texas, has gone 13-0 with nine knockouts since a split draw with Arturo Quintero in November 2010. Figueroa is coming off a split decision win over Jerry Belmontes in an April defense of the belt he won from Nihito Arakawa via unanimous decision in July of last year.

Estrada is confident he will end Figueroa’s run.

“I have been waiting for this opportunity for almost a year. I’ve been the mandatory challenger for a while but for some reason, I couldn’t get the fight for the title,” said Estrada. “Now the opportunity is here and I am very positive I will become a world champion on August 16.”

According to WBC president Mauricio Sulaiman, former two-division titlist Jorge Linares (36-3, 23 KOs) is the mandatory challenger to the winner between Figueroa and Estrada, should Linares get beyond Saturday’s bout against Ira Terry, also contested on the Porter-Brook card.