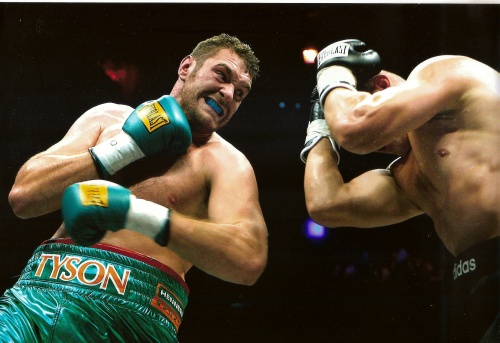 Heavyweight Tyson Fury will face Alexander Ustinov, the nearly 6-foot-8 fighter from Belarus against whom Dereck Chisora broke his hand in his final sparring session, on Saturday at the Phones 4 U Arena in Manchester, promoter Frank Warren announced on Wednesday.

Fury (22-0, 16 knockouts) was left disappointed when Chisora was forced to withdraw from their return bout on Tuesday after breaking his hand against Ustinov (29-1, 21 KOs), but promoter Frank Warren moved quickly to install Ustinov as the replacement. Fury won their first bout by unanimous decision.

“The first thing is that I’m happy to still be fighting this Saturday, and that the fans will get what they paid for and see a good fight. We’ve had a hard training camp, and I’m in the shape of my life, expecting to knockout Chisora. But, now, I’m going to have take it out on Ustinov and make sure he takes the full force of my anger,” said Fury, a 25-year-old 6-9 contender ranked No. 4 by THE RING.

“Chisora will now see what he was going to get on the night —knocked out. Strangely, I’m going to break the man who broke Chisora’s hand. Full credit for Ustinov for taking the fight. He’s a big lad. More importantly, he’s a credible world-ranked opponent, and he must fancy his chances. We’re two gladiators, but he’s going to feel what it like against a world class heavyweight like me.”

A former kickboxing champion and MMA fighter, Ustinov, 37, has won two straight fights since falling by 11th-round stoppage to Kubrat Pulev in September 2012, and was last in action for a unanimous decision over David Tua in November.

“Under the circumstances, Ustinov is a brilliant replacement for Chisora at this late stage. He’s fit and ready after training and sparring for two weeks with Chisora at his gym, and he’s got a great record. Like Fury, he’s a giant of a man, and has got some serious knockout punch power,” said Warren.

“Ustinov is world-ranked inside the top 10 of two major governing bodies, and didn’t hesitate about fighting Fury, which shows his confidence. Fury’s been preparing for a shorter man in Chisora, and he’ll have to adjust his preparations. But with two huge men in the ring throwing big punches, anything can happen.”