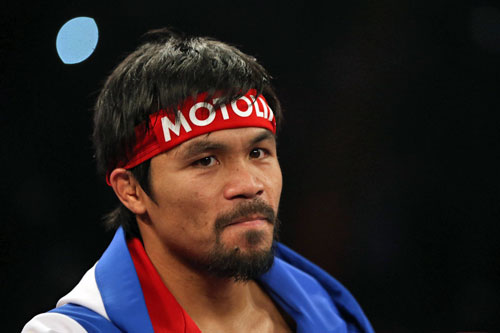 Manny Pacquiao and Chris Algieri have reached an agreement to fight on Nov. 22 in Macau, China, the fighters’ promoters told RingTV.com Tuesday evening.

Said DeGuardia: “We have a deal. We’ve come to an agreement on all terms and with all parties, and now, we’re just waiting to paper it up. And we’re looking forward to the fight.”

Algieri will go from making a career-high $100,000 for last month’s unanimous decision over Ruslan Provodnikov to a guarantee that exceeds $1 million for the Pacquiao fight.

Algieri originally wanted between $1.5 million and $2 million but settled for less, according to The New York Daily News. Algieri will also get a percentage of the pay per view revenue.

“All of Team Algieri is very excited for this fight. We have all worked hard for these opportunities, and we are more than ready,” Algieri said in a prepared statement released by his publicist. “I wanted this fight. This will change my life once again, and I welcome the future.”

The fighters will be tested by The Voluntary Anti-Doping Association, the Daily News reported.

“We’re very happy with his payday, and we’re ecstatic that we could give him this kind of opportunity,” DeGuardia said. “It’s one that is going to set the foundation for the rest of his life.”

Algieri (20-0, 8 knockouts) became a candidate to face Pacquiao when he upset Ruslan Provodnikov to win the WBO junior welterweight title on June 14. The former kick boxer survived two first-round knockdowns, a bloody nose and a right eye that was nearly closed shut to win a split decision.

Algieri is a clinical nutritionist who works with private clients, has a bachelor’s degree in healthcare science from Stony Brook (New York) University and has a master’s degree from the New York Institute of Technology.

“If you want to be a great fighter, then you’ve got to win the fight that you’re not supposed to win,” said Pelullo, referring to Algieri’s fight against Provodnikov. “That’s what he did. He wasn’t supposed to win, he was the underdog, and he won the fight. He won the lottery ticket.

“Joe DeGuardia gave him the lottery ticket and now he’s going to make seven figures. He’s a guy who went from ESPN and now pay per view in three fights because of Joe.”

Pacquiao (56-5-2, 38 KOs) was last in action in April, when he outpointed Tim Bradley to regain the belt he lost by split decision to Bradley in June 2012.

“Chris is going to give Pacquiao the same troubles that he gave Ruslan, because Pacquiao’s going to charge him,” said Pelullo. “The kid did a hell of a job, and the bottom line is that’s how you become a star. Joe has done a great job with the kid’s ÔÇª career.”

DeGuardia is Algieri’s lead promoter. Pelullo, who promotes Provodnikov, has thee options on Algieri as part of their agreement when they made the Algieri-Provodnikov fight.