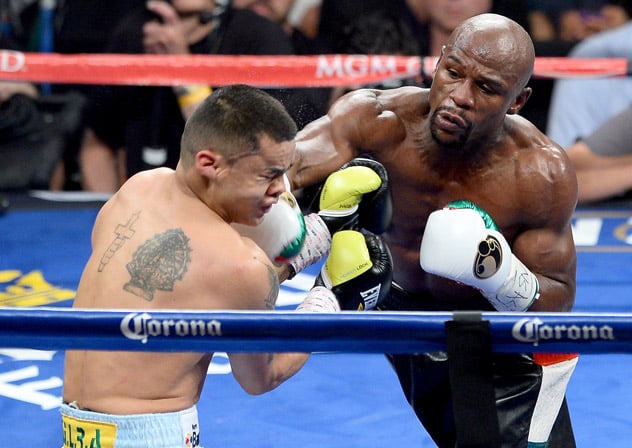 Floyd Mayweather Jr. called Marcos Maidana “a tough customer” and said the Argentine slugger “gave me a fight that had me work for the victory,” in a Thursday press release announcing their Sept. 13 rematch entitled “Mayhem” at the MGM Grand in Las Vegas on Showtime Pay Per View.

“Marcos Maidana is a tough customer and he gave me a fight that had me work for the victory. His style is difficult at best, but with experience comes a way and will to win,” said Mayweather, who turned 37 in February.

“I’m not one to give second chances in the ring, but I want to give the fans what they want to see. I will be as prepared as I always am when I step in the ring on Sept. 13. I only see the outcome one way and that’s another successful night for me and my team.”

The announcement represents an early birthday gift for Maidana, who turns 31 on July 17. Maidana had stopped three consecutive opponents before December’s unanimous decision dethroned the previously unbeaten Adrien Broner, whom he floored once each in the second and eighth rounds for his current belt.

Broner represented Maidana’s fifth fight as a 147-pounder, his last loss having been by unanimous decision to southpaw Devon Alexander in his welterweight debut in February 2012.

“The rematch with Mayweather is the only fight that really motivates me. I feel I earned it in the ring, and Floyd owed it to me,” said Maidana. “I’ve already proved that I don’t care if the man I have in front of me is the best pound-for-pound champion. I was close to ending his reign last time. On Sept. 13, he will not get away undefeated.”

Prior to facing Maidana, Mayweather was coming off September’s majority decision over Canelo Alvarez for the RING, WBA and WBC junior middleweight belts, marking the third time he has fought at 154 pounds.

“This will be another great test for Floyd as Marcos Maidana is hungry to prove he can not only give Floyd a good fight, but redeem his loss and hand Floyd his first defeat,” said Leonard Ellerbe, CEO of Mayweather Promotions.

“Maidana is clearly one of the best in the division and earned this opportunity to face Floyd once again. But that is a big mountain to climb and Floyd will be prepared as he always is to prove once again why they call him TBE — the best ever. It will be another great fight and action-packed evening for the fans.”

Mayweather made a career-high $41.5 million purse for last September’s win over Alvarez, the latter of which grossed an all-time record $150 million. Mayweather-Alvarez surpassed the $136 million for Mayweather’s split decision over Oscar De la Hoya in May of 2007, which dethroned De la Hoya for the WBC’s junior middleweight belt.

The return bout represents the fourth in Mayweather’s exclusive six-fight agreement with Showtime, which Forbes Magazine estimated could be worth a guaranteed total of $250 million.

“Showtime has established itself as the destination for the biggest, most exciting events in boxing, and we are proud to announce our next event with Floyd Mayweather,” said Stephen Espinoza, executive vice president and general manager, Showtime Sports.

“On May 3, the fearless Marcos Maidana attacked Floyd Mayweather with reckless abandon, landing more punches than any previous Mayweather opponent and giving Mayweather one of the toughest fights of his career. That peformance earned Maidana this rematch, and we are in for another electrifying night of boxing.”

Mayweather will be promoted by Golden Boy for the 10th straight time, and will be in his 10th consecutive bout at the MGM, his 13th overall at the venue.

“The first fight between Floyd Mayweather and Marcos Maidana was incredible and it’s an honor to have the opportunity to host the rematch at MGM Grand,” said Richard Sturm, president of sports and entertainment for MGM Resorts International. “These two world-class athletes put on a spectacular show in May, and will do so once again in September when they step into the ring.”

Ticket information will be announced shortly.

**NOTE: A special performance by rapper and D.C. native Wale will follow the press conference.