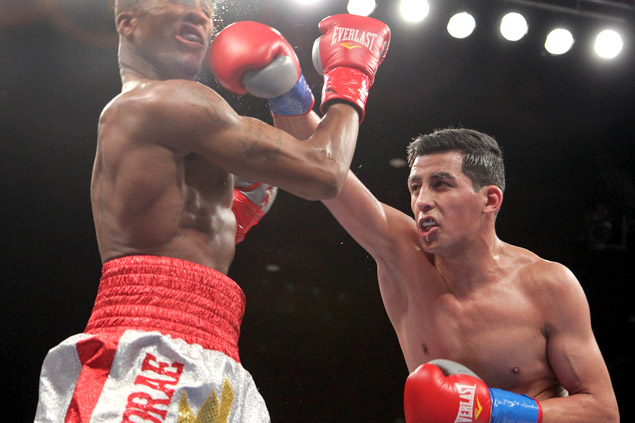 13
May
by Doug Fischer

The bout will headline a ShoBox: The New Generation telecast and will take place at the Fantasy Springs Casino Resort in Indio, Calif.

Prior to that bout, Centeno fought to a no contest against Julian Williams on Sept. 12 in Las Vegas, Nev. After Williams got the better of Centeno during the first three rounds, the bout was stopped in Round 4 when Centeno was unable to continue after suffering a cut over his eye from an accidental head-butt.

Dolton (14-0, 8 KOs) has not fought in almost a year, when he stopped Basilio Silva in the fifth round in Santo Domingo, of the Dominican Republic.

Dolton has two wins over notable foes. He defeated Donatas Bondorovas by majority decision over 10 rounds in June of 2011 and won a 10-round unanimous decision over Richard Gutierrez in November of 2012.
No word yet on what other fights will appear on the card or on the Showtime telecast.

The 22-year-old Luna, who hails from the Los Angeles suburb of Whittier, knocked out Sergio Rivera with one punch in his last bout on March 7 in Pala, Calif.

Despite having beaten only five fighters with winning records thus far in his career, Luna is already ranked number 11 by the WBC and number 14 by the WBA.