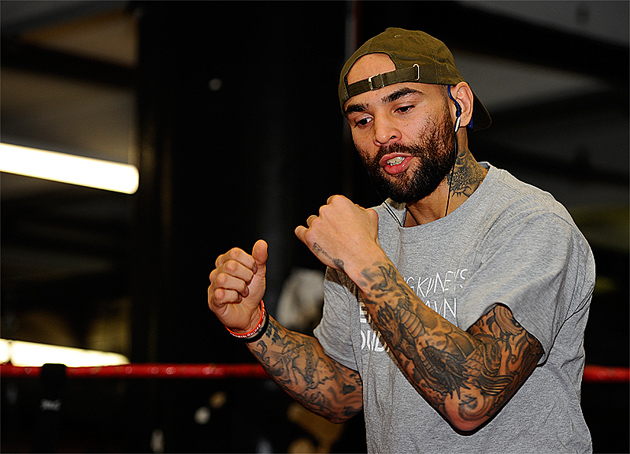 Having revitalized his career by winning four consecutive fights, three of which were contested at Barclays Center in his native Brooklyn, former welterweight titleholder Luis Collazo dreams of facing RING champ Floyd Mayweather Jr. at his hometown arena.

But in order to maintain any hopes of that happening, the southpaw knows that he has to defeat former titleholder Amir Khan (28-3, 19 knockouts) on the May 3 undercard of Mayweather's title defense against WBA counterpart Marcos Maidana at the MGM Grand on Showtime Pay Per View.

Thanks to a union with Barclays Center CEO Brett Yormark, Golden Boy has promoted seven boxing cards at the venue from October 2012 through this past January.

Yormark made a huge push to get Mayweather-Maidana, but Mayweather chose the MGM Grand in Las Vegas, where the fighter lives and which has hosted his past eight fights.

Yormark said that a Mayweather-Collazo bout at Barclays Center "For me, personally, would be a dream come true."

"With the help of Golden Boy, we've been able to advance and nurture the careers of local area fighters. Luis Collazo is an example. Barclays Center kind of gave him the next chapter, I think, in his career," Yormark told RingTV.com.

"Obviously, the night against Ortiz was incredible. To the extent that we can build on that, and bring a championship and a fight that would certainly appeal globally to Brooklyn, not only to see arguably the best of all time in Floyd Mayweather, but to see Mayweather fight a Brooklyn fighter, that is certainly something for the story books, and we certainly would love to be a part of it."

Collazo's wins at Barclays are, in succession, a unanimous decision over Steve Upsher Chambers in October 2012, a fifth-round knockout of Miguel Callist last April and a second-round knockout of ex-beltholder and fellow left-hander Victor Ortiz in January.

Collazo, who turns 33 on April 22, spoke to RingTV.com about his upcoming bout with Khan and the possibility of facing Mayweather at Barclays Center in this Q&A with RingTV.com, below.

RingTV.com: Can you describe the meaning of having fought at Barclays, where you're undefeated?

Luis Collazo: Fighting at the Barclays is just electric. It's like electricity running through your veins, man. To be part of a family and a venue that is where I was born and raised and where I still reside, it's just a blessing.

I love the fact that I'm able to fight there and to be able to give the Brooklyn fans a great night of boxing. I was born in East New York, and I was raised in the Southside which is known as Williamburg.

When it opened up, and Golden Boy decided to have fights there, being from Brooklyn, and to have a big arena like that has just been amazing. That's not only for New York City, but for the borough of Brooklyn.

Being from Brooklyn and fighting there is amazing. To fight in your home town is just tremendous. It's a blessing that Golden Boy has worked out a deal with them. The love and the support that I've been getting is just phenomenal.

RingTV.com: Was the pinnacle the fight with Ortiz?

LC: That last fight with Victor Ortiz, there were 8,000 people that showed up to watch me there. When I came out, the feeling of seeing all of those people there was…I can't even explain it.

You go in there and you have all of these people supporting you, it just adds more fuel to the fire. I was just ready to go out there and was ready to give the fans some excitement. That's what I love to do. I feel like I can give them a great night of boxing every time out.

RingTV.com: Can you talk about the potential for fighting Mayweather there?

LC: You know, fighting Khan, this is it for me right now. Like I said before the Victor Ortiz fight, this fight will open up doors. I don't want to overlook Khan, because Khan is on my radar right now.

So if I get beyond him, the more doors will open and I'll take another step up the ladder. This is just the most important fight in my career, I think, because if I lose, I go back down, but if I win, I open up a lot of opportunities.

RingTV.com: Can you talk, for a moment, about actually being in the ring at Barclays Center against Mayweather?

LC: Even if it was Floyd at the MGM Grand, it would be amazing. But if Floyd comes to Brooklyn, Brooklyn will be in the building at Barclays, and we could really give the fans what they want, which is that excitement.

To have him come to Brooklyn to fight a rugged, Brooklyn fighter who is not stationary, who would give him movement like he gives his opponents, I'm hungry for that.

Listed below are the seven boxing events hosted by Barclays Center and promoted by Golden Boy.