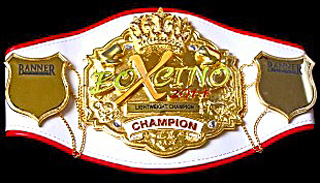 And then there were two.

The 2014 Boxcino lightweight tournament began with eight fighters and after a series of upsets, knockouts, and close decisions, the field is down to the final two.

The most experienced fighter in the field, Petr Petrov stopped Christopher Rudd in the fourth round in one semifinal bout. In the other semifinal bout, Fernando Carcamo won a hard-fought eight round majority decision over Miguel Gonzalez.

During quarterfinal action on Feb. 21, all four bouts were six rounds in duration. In an all-Russian matchup, Petrov won a unanimous decision over Fedor Papazov.

The shorter Petrov was able to back Rudd up in the opening round. He was able to successfully land right hands over the top to Rudd’s head. Undaunted, Rudd was able to occasionally counter Petrov, but was unable to keep him at the end of his jab.

In the third round, Petrov stunned Rudd with a right hand to the head. Petrov followed up with subsequent hooks and rights to Rudd’s body.

Things did not get better for Rudd in the fourth as he was hurt from an overhand right to his head. Sensing Rudd was hurt, Petrov followed up, landing a barrage of punches of crosses and hooks to the head. Rudd tried to fight back, but was better off trying to hold on to Petrov.

Moments later Petrov trapped Rudd in a corner. Petrov landed a number of punches to the head. Rudd was not fighting back, prompting referee Billy Johnson to step in and stop the bout at 51 seconds.

Carcamo had a much more difficult time punching his ticket to the Boxcino tournament final against Gonzalez.

The hard-hitting Carcamo was coming off a second round technical knockout over Samuel Kotey Neequaye, while Gonzalez won a close six-round split decision over Miguel Angel Mendoza.

After a competitive opening round, Carcamo looked as though he would end the fight on a highlight-reel punch. Carcamo landed a left hook that snapped Gonzalez’s head back over the ropes. After following up with a barrage of punches, referee Wayne Fox stepped in and correctly administered an eight-count to Gonzalez. To his credit, Gonzalez was able to get through the round.

Gonzalez recovered well in the next couple of rounds, backing Carcamo up against the ropes and beating him to the punch.

Carcamo swung momentum to his side in the third round by attacking the body of Gonzalez with both hands. Carcamo seemed to stun Gonzalez in the fourth round with a right hand to the head, following it up with combinations to the head and body.

Gonzalez had moments where he was able to beat Carcamo to the punch in the second half of the fight. While Gonzalez landed more punches early on in the fight, Carcamo landed the harder and more telling blows in the last three or four rounds.

One judge scored the bout 76-76, while the other two judges scored the bout 78-74 and 77-75 in favor of Carcamo. Based on the scorecards, it looked as though the judges did not acknowledge the knockdown in the opening round.

Petrov and Carcamo will face off in the final of the Boxcino lightweight tournament on May 23 at the Turning Stone Resort and Casino in Verona, N.Y. The bout will be scheduled for 10 rounds.