Nihito Arakawa brings his warrior spirit back to the U.S. vs. Jorge Linares 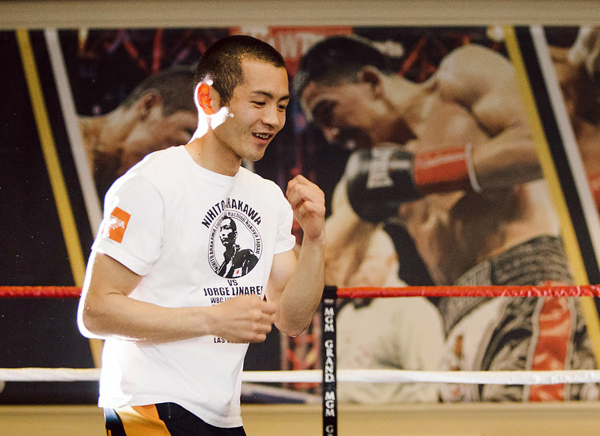 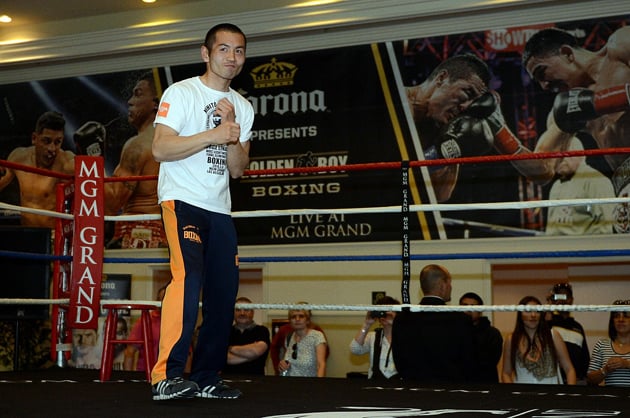 LAS VEGAS – Many foreign boxers made names for themselves in the U.S. in 2013. It was a banner year for Marcos Maidana, Gennady Golovkin, Adonis Stevenson, Ruslan Provodnikov, Sergey Kovalev and other non-American boxers who fought on U.S. television.

But no fighter raised his stature during the course of one fight as much as Japanese veteran Nihito Arakawa did with the heroic effort he put forth against Omar Figueroa Jr. last July in San Antonio. The 32-year-old Tokyo native, a complete unknown to American fans going into the Showtime-televised fight, lost a lopsided unanimous decision but the scores of 119-107 and 118-108 (twice) were not all indicative of the brutal two-way action that took place in every round.

The 12-round bout was so punishing that both fighters took the rest of 2013 off. Figueroa, who earned the WBC lightweight belt with the victory, reinjured his left hand that was hurt during the Arakawa fight, forcing him to pullout of his scheduled title defense against Ricardo Alvarez on the undercard of Saturday’s Canelo Alvarez-Alfredo Angulo headlined event at MGM Grand. Replacing the Figueroa-Alvarez bout on the Showtime Pay-Per-View broadcast is an intriguing lightweight match between Arakawa (24-3-1, 16 knockouts) and Japan-based Venezuelan standout Jorge Linares. 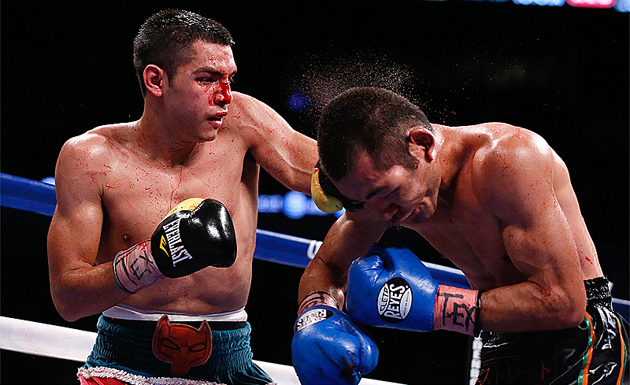 Hardcore fans that fell in love with Arakawa during the Figueroa fight are curious to see what the volume-punching southpaw has left against the immensely talented-but-fragile two-division titleholder.

Following a public workout outside of the MGM Grand Garden Arena on Wednesday, Arakawa told RingTV.com that fans can expect a lot from him.

“I know that my fight with Omar Figueroa was a very hard one but as far as I was concerned I was ready to fight again one month later,” Arakawa said through translator Nobu Ikushima.

“We told him ‘No, your body needs to rest,’” Nakaya said.

As the weeks went by during his forced hiatus from training, Arakawa said he began to learn about the impact the Figueroa fight had on fans in Japan.

“It was broadcast in Japan and the commentators said it was a great fight, which made me proud,” he said matter-of-factly.

When asked if he was aware that he made a name for himself among American fans, Arakawa smiled sheepishly and replied “I hear a little about it.”

If Arakawa seems a bit nonchalant about his performance in the Figueroa fight, keep in mind that it goes against Japanese culture to boast about oneself. And also consider this: Arakawa says the Figueroa fight wasn’t the toughest of his career. That prize goes to a razor-thin split decision against Jay Solmiano in October of 2011 at the famous Korakuen Hall in Tokyo.

“It was a fight for the vacant OPBF (Oriental-Pacific Boxing Federation) title,” recalled Arakawa, who had to get from second-round knockdown to outfight the then-undefeated Filipino standout.

“That fight was so hard; the pain was so bad, that I don’t remember it.”

It’s difficult to fathom a fight being harder and more grueling than Figueroa-Arakawa.

The 12-round bout, which many considered to be a fight of the year candidate, was incredibly brutal, and Arakawa, who was dropped in Rounds 2 and 6, was on the receiving end of much of the brutality.

However, Arakawa refused to quit. Despite lacking the punching power of Figueroa, who had stopped eight of his last nine opponents coming into the fight, Arakawa never stopped pressing the 23-year-old favorite.

Despite being older, smaller and slower, Arakawa never stopped trying to win, and fans following the relentless action took notice. Hardcore boxing aficionados who Tweeted during the Showtime broadcast were taken on a collective emotional roller coaster ride that went something like this:

“Who is this Japanese guy?… He’s about to get KTFO… Oh s__! He’s coming back!… Damn, he’s gettin’ in Omar’s a$$!… Arakawa’s taking too much punishment… They need to stop this fight… OMG! He’s coming back again!… Arakawa is the toughest S.O.B. ever!”

The pace and the volume punching of both fighters was inhuman, as was the manner in which Arakawa continued to press Figueroa to the ropes after being rocked by the Texan’s power shots. Midway through Round 5, Showtime’s boxing analyst Al Bernstein stated:

Showtime’s blow-by-blow commentator Mauro Ranallo, a veteran of Asian MMA broadcasts, summed up Arakawa’s performance with one word: Bushido. It’s the Japanese word for the samurai’s code of honor. Its meaning can be boiled down to “warrior spirit.” Arakawa and Figueroa both had it on July 27, 2013.

That won’t be the case on Saturday. Arakawa is not facing a fellow samurai with boxing gloves in Linares (35-3, 23 KOs). The 28-year-old former featherweight and junior lightweight beltholder is at his best when he is sticking-and-moving, not going toe-to-toe.

Linares has won four in row since being stopped in back-to-back fights: a bloody 11th-round TKO against Antonio DeMarco and two-round shootout with Sergio Thompson. He was sucked into a battle of attrition with DeMarco in October 2011 and was clipped, then badly cut when trying to put Thompson away early in their March 2012 bout.

Linares, who has gone back to boxing on his toes and setting up his power shots from a distance, seems to have learned his lesson. He won’t bring the fight as Figueroa did.

“Linares is very technical, very speedy,” Arakawa said. “I honestly don’t know if this makes him a more difficult opponent than Figueroa. I just know that his is a boxing style, but if I can shorten the distance (between us) during the fight, I can win.

“I know what happens to him when he is made to fight.”

The Arakawa-Linares fight will be broadcast live on Japanese television (the WOWWOW cable network) at 10:00 a.m. Sunday morning. Arakawa, who was inspired to take up boxing after watching U.S.-based world title bouts on WOWWOW, says he’s moved by the opportunity to motivate other aspiring prize fighters in his native country.

“I’m honored to fight in Las Vegas and to be broadcast back in Japan,” he said. “I hope that my fighting here allows other Japanese fighters to one day fight here as well.”

If they fight half as hard as Arakawa, American fans will welcome them with open arms.