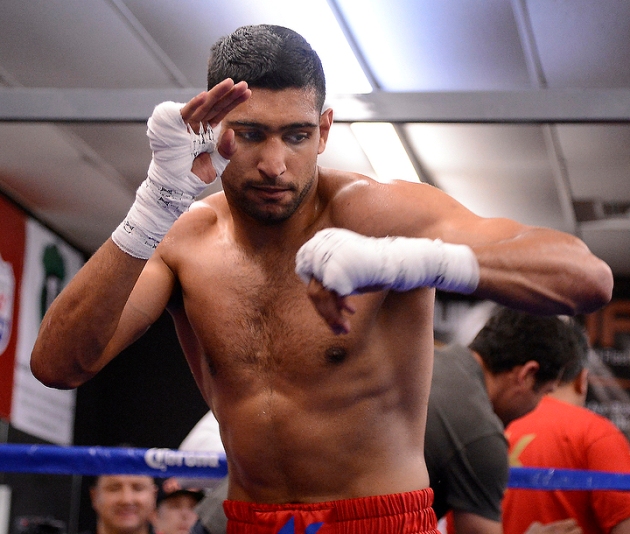 Amir Khan sent out an official statement on Tuesday about Floyd Mayweather Jr.'s decision to fight Marcos Maidana on May 3 instead of him. Khan says the Monday announcement was not a surprise but adds that he was disappointed with Mayweather for delaying the decision for so long.

The official statement from Khan:

"Following the announcement by Floyd Mayweather that he will be facing Marcos Maidana on May 3rd, I would like to clarify my situation for my fans and members of the media.

"Despite having signed my part of the agreement to fight Floyd in early December, I've been preparing myself for some time that the match up with him wasn't going to happen, as I announced on Twitter a few days ago. Therefore, this announcement did not come as a surprise.

"I am, however, very disappointed with Floyd and his team for not providing any explanation as to why he delayed the announcement for so long and ultimately avoided the fight with me.

"Clarification, if he was not fighting me, would have allowed me to look over my options and pursue another path, rather than the ultimate delay to my career this has caused.

"It has been a very frustrating period as I'd been due to fight in December against Devon Alexander, however, I was strongly advised to not take this fight as I would be facing Floyd this May and therefore signed my side of the contract on this belief.

"Floyd was keen to engage with the fans and so decided to let them choose who he should fight in his next bout. I clearly won his official poll, by a significant margin, but for unknown reasons he decided to ignore the fans vote and failed to keep his word. Disappointing many fight fans who took the time to vote.

"I genuinely wish Marcos and Floyd all the best for their fight two great fighters. As a team we have now moved on and are looking at different options.

"I've been training very hard since my last fight. I'm a fighter who wants to face the very best out there and have never ducked any opponent.

"I'm focused and ready for my next outing – we currently have a few options on the table at the moment and my team are working alongside Golden Boy Promotions to announce my next fight within the next 10 days.

"I can't wait to get back in the ring and am determined to put on a great show for my loyal fans who have waited a long time to see me back in action and I'm very excited about what's yet to come this year. Thank you for all your continued support."