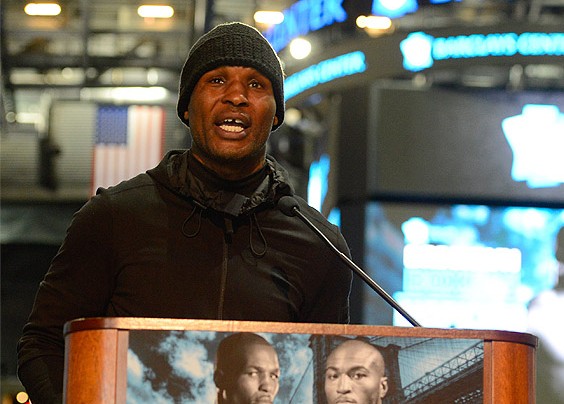 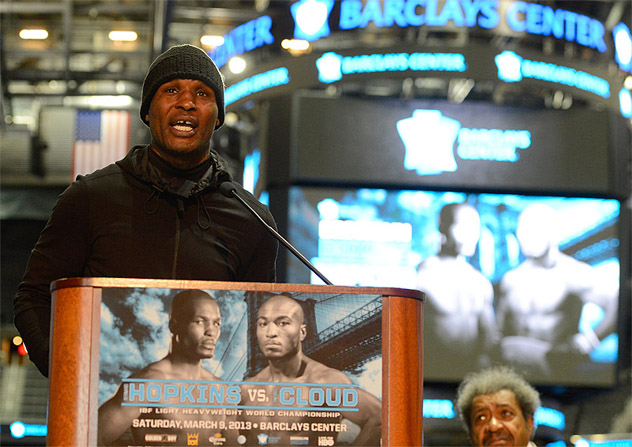 IBF light heavyweight titleholder Bernard Hopkins turned 49 in January after having become the oldest man to win a significant boxing crown in 2013. A former undisputed middleweight champion, Hopkins  has made a career out of beating up younger men.

But the reason Hopkins has been able to do so is because he has taken his health as seriously as he has the training and preparation for his craft.

"Boxing isn't like other sports. It's not a game," said Hopkins. "And the sooner we, as fighters, can detect when there's a problem that needs to be addressed, then we can act accordingly."

That is why Hopkins is in attendence at Tuesday's summit at the United States Capitol, that has been organized by The Lou Ruvo Center for Brain Health, which has engaged in the most comprehensive brain imaging of professional boxers to date.

The study has enrolled nearly 400 active and retired fighters with the goal of evaluating 625 by its completion. Participation is completely voluntary, and fighters in the study receive free, ongoing assessments of their brain health and brain function, including MRI scans. Individual tests will be repeated annually for at least four years

"The Cleveland Clinic is making history with this study, and I encourage all fighters to get involved and be informed," said Hopkins. "Take control of your career, your health and your life."

"As the leading promoter in boxing, we are happy to support this important study and honored to be involved with the Cleveland Clinic and such a distinguished group of fight promoters," said Schaefer. "I am happy to see that the fight community has united in this important effort."

"Many of our Las Vegas families have been at the forefront in supporting The Cleveland Clinic, Lou Ruvo Center for Brain Health's mission since its inception because of the direct impact Alzheimer's Disease had on us,” said duBoef, whose mother and Arum's wife, Lovee, serves on the Board of Directors for The Cleveland Clinic in Las Vegas.

"Now that their study has extended into the sport of boxing, Top Rank is dedicated to doing everything it can in helping to fund its research of this critical study. The future of boxing is in protecting and improving the health and safety of fighters at the earliest stages of their careers. We are proud of our founding partnership with the Lou Ruvo Center, and will continue our ongoing support to this fantastic program and the institution."

"This is pretty cool. This is pretty neat. To have this amount of time and money invested in a project like this, it's really for a great cause," said Garcia, who is 26. "This sort or research and these sort of campaigns are important, not just for boxing, but for other sports as well in raising the awareness about head trauma and generally bringing about important changes."

Sen. Reid was an amateur boxer in his youth.

"As a former boxer, I know first-hand the toll that a fighter's body takes when he or she is in the ring," he said. "I want to thank the Cleveland Clinic and the leaders of the four fighting organizations for bringing awareness to this important issue facing professional sports today."

"I appreciate the fact that top boxing and mixed martial-arts (‘MMA’) organizations have joined together to directly support the Cleveland Clinic’s Professional Fighters Brain Health Study," said Sen. McCain, who has been involved in legislation related to boxing since the mid-1990s.

"The willingness of these organizations to support research into the effects of contact sports on brain health indicates their willingness to take very seriously the welfare of their boxers and fighters and demonstrates that they recognize how crucial fighter-safety is to the long-term viability of their sports. I am hopeful that their funding for this study will advance our understanding, diagnosis, and treatment of brain trauma and support similar research efforts going well beyond the ring."

"This gift is significant on many levels," said Ruvo. "But to see these organizations come together to continue this important work confirms that what we’re doing at the center is important to the future of fighting."

The event comes one day after the death on Monday afternoon of featherweight boxer Oscar Gonzalez as a result of brain injuries he suffered during a 10th-round knockout loss to Jesus Galicia in Mexico City.

"UFC was the first — and remains the only — combat sports organization to provide our athletes with accident insurance coverage for training-related injuries," said Fertitta. "Today's announcement is a 'no brainer' for us, as we continue our commitment to athlete safety. We are proud to join with these other prominent promoters — our colleague and competitors — to support the Cleveland Clinic’s brain health study.

"We are encouraged by the early results of the study and we look forward to the final findings of the Lou Ruvo Center's research, knowing that they will benefit our athletes, as well as athletes from many other sports. Finally, the support shown by Senators Reid and McCain, and many of their colleagues, cannot go unnoticed. They have been true leaders and we thank them on behalf of the UFC, our athletes and our fans."