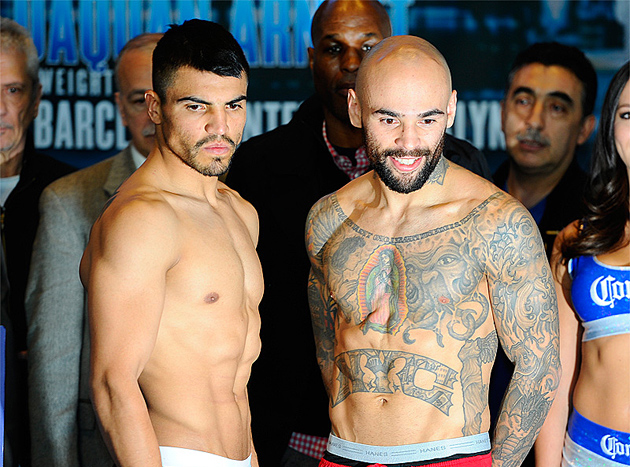 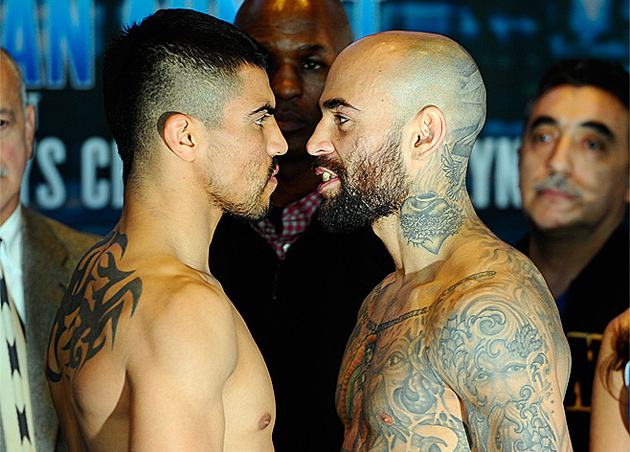 RingTV.com has a live round-by-round update of tonight's welterweight bout between former beltholders during which Luis Collazo scored a second-round knockout over Victor Ortiz on Fox Sports 1 at Barclays Center in Brooklyn.

Collazo (35-5, 18 knockouts) landed a vicious right hook that stunned Ortiz, who dropped to his knees and remained there as he was counted out by referee Benji Esteves at the 2:59 mark.

Collazo out-landed Ortiz, just 31-to-30, but it was that one big shot that was the difference.

Collazo has gone 6-1 with four knockouts victories in his past seven bouts, and is 4-0 with two knockouts since falling by 10-round unanimous decision to Freddy Hernandez, who dropped him in the eighth round in October of 2011.

Before winning a unanimous decision over Alan Sanchez in Texas in his last fight in September, Collazo won two straight, with each of the wins taking place at Barclays Center.

An all-action fighter who was competing the day before his 27th birthday, Ortiz (29-5-2, 22 knockouts) was ending a 19-month ring absence, having been cast for a role in the third installment of Sylvester Stallone’s The Expendables and participating in Dancing With The Stars during his time away from the sport.

Ortiz had last been in the ring in June of 2012, when he suffered a ninth-round stoppage loss to Josesito Lopez after which he required a two-hour surgery to repair a broken jaw.

Collazo enters the ring first wearing a read and white baseball cap and a beige jacket to the boisterous cheers of his partisan fans.

Round 1: Ortiz's body is cut, but it is worth noting that his body looks dry. The heavily-tattooed Collazo is also chisled. Ortiz practically runs across the ring. He's coming foward. Collazo stands his ground. Ortiz lands a left cross to the body. Another cross to the body and a double-right jab by Ortiz. Right hook by Ortiz. Collazo's not very active. Double-right jab by Collazo as an up-jab. Collazo's posing more than punching. Left cross inside by Collazo. They trade right hands. Three-punch combo by Ortiz, who is clearly more active. Double-jab by Ortiz, who misses a left. Activity goes to Ortiz. Ortiz, 10-9.

Round 2: Early right hook by Collazo. Left cross to the body by Ortiz. Triple-jab by Collazo, same by Ortiz. Solid three-punch combo by Ortiz and a right by Collazo. Collazo has picked up the pace behind his jab with a right and a left uppercut that lands cleanly. Solid left by Collazo. Collazo's movement may be beginning to trouble Ortiz. Collazo's double-jab and two left hands land well. Left by Ortiz. Two right hands land as well as a left. ORTIZ IS DOWN FROM A SOLID RIGHT HAND!!!! HE IS ON HIS KNEES!!! REFEREE BENJI ESTEVES COUNTS HIM OUT!!! FIGHT'S OVER!!!