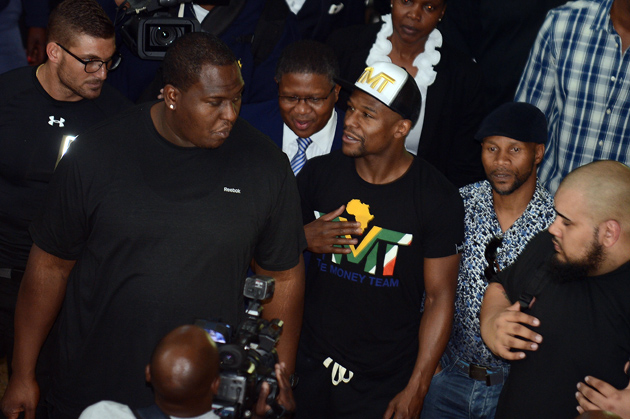 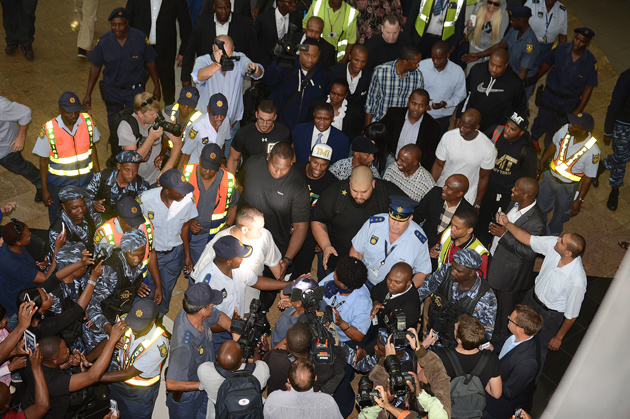 Floyd Mayweather Jr. is mobbed as he arrives at OR Tambio International Airport on Jan. 15, in Johannesburg, South Africa.

Sitting next to Floyd Mayweather Jr. during a Wednesday press in Johannesburg, South Africa, the nation's Minister of Sport and Recreation praised boxing's pound-for-pound king with words befitting a monarch.

"We don't host mediocrity, we host champions. We will roll out the red carpet for you for the rest to see, because humanity has given you to us," said Fikile Mbala, at one point referring to Mayweather as "the rose that grew from concrete" adding "you traveled a long journey and it has touched all of us.

"You no longer belong to America. These kids look up to you. The people you see here, they don't sleep when you fight… Thanks, my brother, for coming. We know that you're visiting this country is priceless… may something out of this bless us for the good of humanity, globally."

Click here for the video of the press conference.

Wearing a T-shirt with a bright yellow map of Africa on the front, with the logo TMT for "The Money Team" below as well as the colors of the South African flag, Mayweather arrived as part of a week-long, four-city visit whose organizers hope to "resuscitate" boxing in the nation, according to The Associated Press.

"Every time I go out there and fight," said Mayweather, who turns 37 in February, "I just don't represent the red white and blue. Floyd Mayweather represents the world."

Plans are for Mayweather to give an exhibition at a gym in the Johannesburg township of Soweto, potentially visit the late South African President Nelson Mandela's apartheid-era jail on Robben Island when he's in Cape Town, and also, see the areas of Bloemfontein and East London on the south east coast, the city regarded as the hotbed of South African boxing.

Mandela, who died in December at the age of 95, was an amateur boxer and a big fan of Joe Louis and Muhammad Ali, and felt that boxing, like many sports, broke down the barriers of race.

It did not take long for questions from media members to focus on the future plans of Mayweather (45-0, 26 knockouts),  who still is considering the opponent he will fight next on May 3 at the MGM Grand in Las Vegas amid wide speculation that he will face England's Amir Khan.

Khan (28-3, 19 KOs) stated publicly late last month that he has signed his contract to face Mayweather, who was last in the ring in September, when he dethroned Canel Alvarez by majority decision for the RING and WBC 154-pound championships.

Mayweather also mentioned Marcos Maidana, who may already be in line for a rematch on April 19 or April 26 with Adrien “The Problem” Broner, whom Maidana dethroned as WBA 147-pound titleholder by unanimous decision  last month.

"We'll know within the next seven days if it's Amir Khan, if it's Marcos Maidana," said Mayweather, who is also the WBA's reigning 154-pound titleholder, having earned that belt by unanimous decision over Miguel Cotto in May of 2012. "We don't know who it is at this particular time. Hopefully it's somebody who is very, very exciting so that we can continue to give you guys nothing but excitement."

Mayweather has stated that he will never do business with Pacquiao's promoter, Top Rank CEO Bob Arum. According to Pacquiao,  that would mean a megabout between the two would have to wait until 2015.

Pacquiao has since stated that he will never leave Arum for a bout with Mayweawther.

"He's with Bob Arum, which is his promoter, and I'm under my own banner, which is Mayweather Promotions. If I'm keeping 100 percent of the revenue, there's no way I can go split 30 percent, 20 percent, not even 10 percent," said Mayweather, whose fights are handled by Golden Boy Promotions.

"Bob Arum is a promoter that I was once with. I'm no longer with Bob Arum. He's a guy that was my promoter for nine years of my career, or probably even 10 years of my career. Once I left that promoter, I went to a level that is just unbelievable. How I got there is that I became my own boss, and I did the things that I wanted to do. I promoted my fights the way I wanted to promote my fights. I kept all the money…"

Like Pacquiao, Guerrero and Ortiz are both southpaws, against whom Mayweather was reminde that he is 7-0.

"My whole thing is put them in front of me and see what we can do in there," said Mayweather. "You just said that there were seven, well, seven came up short."

Mayweather-Alvarez as predicted on Showtime Pay Per View has become the highest-grossing boxing event of all time with $150 million in revenue reported, eclipsing the $136 million earned by Mayweather’s 2007 victory over Oscar De La Hoya.

An online report by Forbes’ Magazine estimated that Mayweather’s exclusive multi-fight venture with Showtime and its parent company, CBS Corporation, to be worth a guaranteed $250 million .  Mayweather was the highest-paid athlete in American sports  over the course of 2012 and 2013.

Would Mayweather ever consider a fight in South Africa?

"I've been getting some offers through e-mails. Also, my uncle, Jeff [Mayweather,] has been speaking to people in Africa," said Mayweather. "Hopefully, It's a dream of mine to fight here some day. So, hopefully, we can make it happen if it's plausible."

Asked at one point if he claimed to be "the greatest (boxer) in history," said Mayweather, who vowed to fight four more times. "I'm TBE," adding, "Ali was considered 'The Greatest.' I call myself 'TBE,' which is, 'The best ever.'"

Mayweather added that he "looks forward to coming back" to South Africa, adding, "hopefully, coming back and fighting."