Golden Boy President Oscar De La Hoya recently extended Christmas greetings to Top Rank CEO Bob Arum, who responded in kind. The executives did so on their respective Twitter accounts within the span of five days.

“Mr. Arum, on behalf of my family and I, we wish you happy holidays and a great year,” wrote De La Hoya, who once fought under Arum’s promotional banner, on Dec. 14. “Let’s make these fights for the fans.”

On Dec. 18, Arum answered, including De La Hoya’s wife, Millie, in his response.

“Thank you Oscar,” wrote Arum. “Wish you and Millie a merry Christmas.” 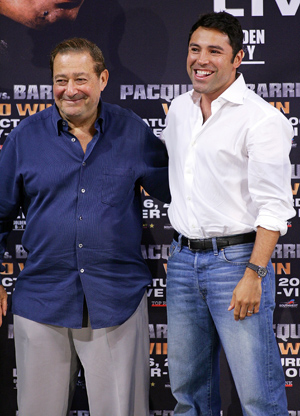 Arum, who turned 82 on Dec. 8, shared more on the development during an interview with RingTV.com on Thursday night.

“Oscar sent me whatever you call it — a Tweet — and he said something nice. So I responded based on the time of year and the time the season. I wish he and Millie a merry Christmas. Why wouldn’t I?” said Arum of De La Hoya, who will turn 41 in February.

“Oscar and I share a lot of fond memories together, you know, for many, many years. Don’t forget that. While it’s been sort of sideways for the last number of years, still, those memories were really great. You know, we did really well together.”

Arum signed De La Hoya out of the 1992 Olympics, where the man to be known as “The Golden Boy” won a gold medal. De La Hoya won nine of his 10 title belts over six different weight classes under the Top Rank banner during his professional boxing career, and will be inducted into the International Hall of Fame’s Class of 2014.

“The last fight that we had together that I actually promoted of his was Bernard Hopkins,” said Arum of De La Hoya, who fought under the Top Rank banner until falling to Hopkins by ninth-round stoppage in September of 2004. “When I go into my house in Las Vegas, I say that it’s called, ‘The House That Oscar Built’ and it’s a beautiful home and a lot of it was from profits from the big fights that we did with Oscar.”

But during the season to be jolly, is it really credible that boxing’s two biggest promoters and perennial rivals are willing to bury the hatchet?

Whether their acknowledgements mean anything beyond what has been written is up to interpretation, but perhaps the biggest gift De La Hoya and Arum could grant boxing fans is a long-awaited mega bout between RING No. 1-rated pound-for-pound Floyd Mayweather Jr. and eight division titlewinner Manny Pacquiao.

Mayweather (45-0, 26 knockouts) has stated firmly that he will never face Pacquiao as long as the Filipino star is associated with Arum.

Mayweather, meanwhile, has a target date to return of May 3 either at the MGM Grand in Las Vegas, or potentially at Barclays Center in Brooklyn, N.Y.

There is wide speculation that final details are close to being completed for Mayweather to face England’s Amir Khan, and that the announcement could be made soon.

Mayweather already was the WBA’s reigning 154-pound titleholder, having earned that belt by unanimous decision over Miguel Cotto in May of 2012.

Pacquiao (55-5-2, 38 KOs) has been installed as the No. 1 contender in the WBC’s 147-pound ratings behind Mayweather as listed in the organization’s recent rankings.

Meanwhile, Pacquiao, who turned 35 on Dec. 17, was last in the ring for last month’s welterweight unanimous decision triumph over Brandon Rios that sold only 475,000 units on pay per view — far less than the 1.15 million buys generated by Pacquiao’s sixth-round stoppage loss to Juan Manuel Marquez in December of last year.

Prior to facing Marquez, against whom he is 1-2-1, Pacquiao was dethroned as WBO 147-pound beltholder following a split-decision loss to Tim Bradley in June of 2012.

“I really, from my standpoint, I only responded the way that I did to Oscar not for any business purpose in mind or not to make any fights happen, but because it was just something that I wanted to do,” said Arum.

“So let’s send a message to him that’s what’s ever happened in the last number of years, that there’s no hard feelings, and I remember all of the great times and all of the great things that we did together. That’s really the truth. There was no ulterior motive on my part.”