Chris John to face Simpiwe Vetyeka on Dec. 6 in Australia 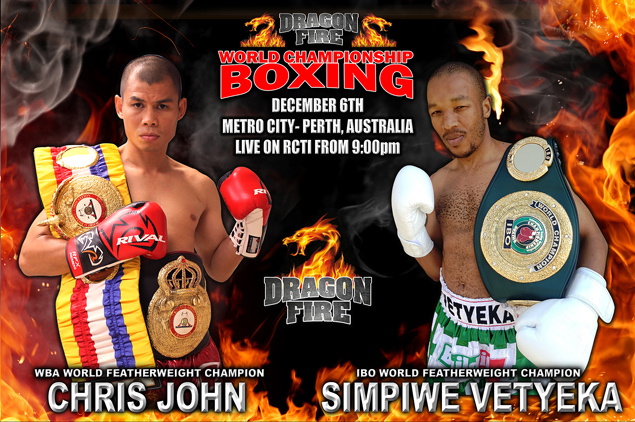 John (48-0-3, 22 knockouts), who will tie the division record of 19 defenses currently held by Eusebio Pedroza since the mid 1980s if successful, has a healthy respect for Vetyeka.

“He is an expert boxer and I cannot wait for Dec. 6,” said John, an expert boxer himself and Indonesia’s most accomplished boxer. “It is a big honor to for me, every defense that I make of the World Boxing Association featherweight championship. Everything I do is for the people of my country to give them hope. Eusebio Pedroza is legend in our sport and with dedication, determination and discipline I will do my best to equal that record.”

Last time out “The Dragon” had to settle for an unsatisfactory third-round technical draw with Japan’s Satoshi Hosono following a clash of heads that left John badly cut and unable to continue.

The challenger Vetyeka (25-2, 15 KOs) is no stranger to Indonesia having beat John’s countryman and heir apparent Daud Cino Yordan there in his last fight, stopping the Indonesian in the final round to secure the IBO featherweight crown.

Fighting away from home wont perturb the 32-year-old South African, who notes that he has several impressive wins on the road.

“I have won in America, Mexico and also stopped Yordan in his backyard, so Australia prepare for another boxing exhibition,” he said.

The humble 33 year old acknowledges this with a smile.

“I want to thank the World Boxing Association for giving me the opportunity to become champion and travel the world to defend the title (Japan, Indonesia, Australia, Singapore and America),” he said. “I always do my best to represent them with pride and dignity in the sport I love.” 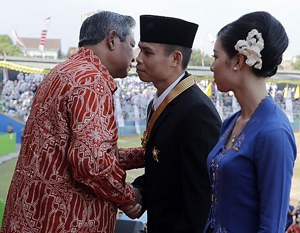 John, The WBA’s Fighter of the Decade, was recently honored by Indonesian president Susilo Bambang Yudhoyo with the Bintang Jasa Star medal for outstanding contributions to Indonesia, the homeland of 242 million people.

John headed to Australia where he set up his training base as usual at Harry’s Gym in Balcatta with Team Dragon Fire.

The event will be broadcast live in Indonesia on RCTI beginning at 9:00pm (Jakarta time)

For all the latest information go to www.facebook.com/dragonfireboxing