NEW YORK, N.Y. – If Curtis Stevens was 48 hours away from having his world title dreams shattered by middleweight champion Gennady Golovkin, he didn’t get the text message.

Stevens looked like a man waiting to board a cruise ship for a vacation to the Bahamas as he lounged on an overstuffed couch before the final press conference at the Refinery Hotel in midtown Manhattan on Thursday afternoon. Relaxed didn’t accurately capture Stevens’ mood.

His mood is the result of 10 weeks of hard preparation and a strategy that will allow him to deal with anything that Golovkin can throw at him over the course of 12 rounds in their HBO-televised match at The Theater at Madison Square Garden on Saturday night.

“I’m a middleweight now and I know the power that I possess, so why not go after the man that they said no one wants to fight?”

Stevens’ desire to take on Golovkin, who has KO’ed 14 straight opponents, has drawn praise from HBO executives and Golovkins’ management. 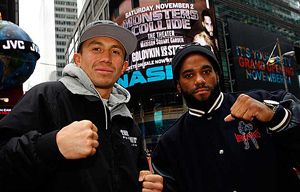 “The opponents at the top level in the middleweight division, they have the ‘just not next’ syndrome when it comes to fighting Golovkin,” said Ken Hershman, President of HBO Sports. “That’s why we were impressed with Curtis Stevens taking the fight. He came to us and advocated for this fight.”

But the 28-year-old Stevens, who was born and raised in Brownsville, Brooklyn, knows a set up when he sees one. He knows that Golovkin is being groomed as the next HBO star. Stevens knows that he is supposed to be the chump. He has a different plan.

“I’m gonna be the spoiler,” Stevens said. “That’s why I asked for this task at hand, because I see what they’re doing.”

It’s a tall order considering that Golovkin (27-0, 24 KOs) has been plowing through opponents like a rampaging rhino. Stevens said the match could be an all-out war with heavy punches being thrown in bunches by both boxers or it could be a tactical chess match.

Stevens has not endeared himself to Golovkin by trash talking and posting photos of fake funerals and the like. Golovkin said he respects Stevens’ ability, but not his mouthy ways.

“He’s strong guy. Good fighter. I saw his last couple of fights. He has a great left hook. He’s a good boxer,” Golovkin said. “He has a big mouth. Every day he talks. It is too much talk. It’s not good. Bad business for him.”

“Come Saturday I’m going to show them just because they want to make the guy into a middleweight champion that he hasn’t been in there with someone to test him out that much. When he can’t overcome that adversity what do you have in your hands?” Stevens said.

Stevens has been waiting nine years for this title opportunity. He was one of the most decorated amateurs in New York City and he turned pro to tremendous fanfare in 2004. Stevens and another high profiled amateur, Jaidon Codrington, were known as “The Chin Checkers” because of their knockout prowess.

“When you’re fighting every month and knocking people out, it’s great. But I believe I wasn’t humble. I was too cocky with it,” Stevens said. “God slowed me down with it a little bit.”

Stevens suffered his first loss against Marcos Primera in 2006. He was leading on all the scorecards when he took a shot and was stunned. The referee stopped the fight, giving Primera an eighth-round TKO victory. Stevens won a 10-round decision in the rematch.

A year later he lost a decision to Andre Dirrell. Stevens admits that he didn’t throw enough punches to win the fight. But the loss that sent Stevens into a spiral was against Jesse Brinkley in 2010. It was an IBF super middleweight eliminator for the No. 2 position.

Chafing under management problems, Stevens walked away from the sport for two years. He continued to keep himself in shape and even opened up a day care center in Queens.

“Dollars make sense. One thing people don’t stop doing is having kids and they need somebody to watch them. You have to have something that brings in the revenue,” said Stevens, who is the father of a one-year-old son.

While he was sitting out, Stevens was watching his contemporaries gain prominence in the sport and win world championships – boxers like Andre Ward, Victor Ortiz, Jean Pascal and Lamont Peterson. It was humbling and motivating.

“When you watch TV and see all the guys you came up in the amateurs with becoming world champions and fighting on TV gave me the drive to want to be in there,” Stevens said. “Once I get out of my contract I said I was going to take over the middleweight division.”

It also gave Stevens a chance to reflect on the politics and vagaries of the sport.

“Everyone is given different roles. Some people have the Sugar Ray Leonard role and some people have the (Marvin) Hagler role,” Stevens said. “To show you how the boxing industry is just crazy. (Promoter) Lou DiBella had Andre Berto and Curtis Stevens and Jaidon Codrington. Andre Berto’s first fight on HBO was somebody you could find on 42nd Street. Not taking away from what he did to the guy.

Stevens returned and ripped off four straight wins to set up the match against Golovkin. He will be the star for Main Events Promotions if he beats Golovkin for the two middleweight world titles (WBA and IBO) on Saturday night. He believes he is fit for that role. And he feels some kind of cosmic history is on his side.

“I won my first Golden Gloves title in 2002 at The Theater in the Garden,” he said. “For me to fight for my first world title in the same place in 2013, that’s great. I believe it will all be made into history.”