Frampton ready for title after stopping Parodi in six 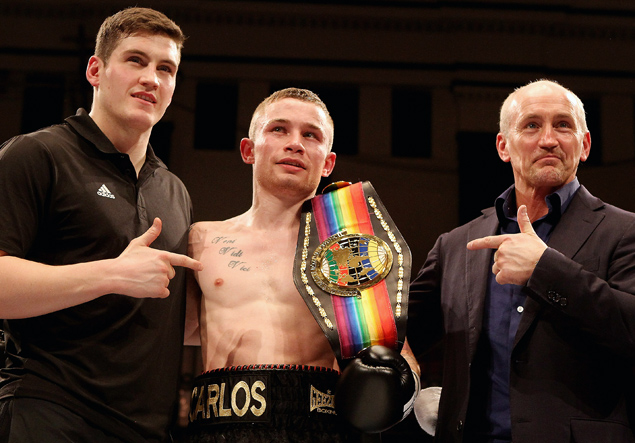 Carl Frampton continued his assault on the junior featherweight division with a sixth-round thrashing of Frenchman Jeremy Parodi in Belfast and now looks set to face the winner of the IBF world title bout between champion Kiko Martinez and Jeffrey Mathebula, which has been scheduled for Dec. 21 in Spain.

Frampton, THE RING’s No. 3-rated 122 pounder, looked impressive throughout and ended matters with a picturesque counter left hook to the body. There was a delayed reaction from the French boxer but he took a knee and was unable to refill his lungs within the 10 count.

“I’m ready for anyone,” said the unbeaten 26 year old. “This sends a message to all of the fighters at 122 pounds, whether it’s Scott Quigg or Kiko Martinez. Who’s next?”

Parodi appeared intimidated by Frampton’s power in Round 1 and immediately got on his bicycle. The Irishman pursued behind a solid jab and midway through the session dropped in a perfect right hand counter which shook the Frenchman to his boots.

The second round was closer as Frampton worked on timing and rhythm. He avoided his opponent’s jab with subtle head movement and countered with an educated left lead of his own. The Irishman, as is his trademark, also kept a close eye on his opponent’s ribcage.

Parodi was down off his toes in Round 3 and displayed some nice defensive maneuvers of his own, as he parried and rode some blows. Frampton was unleashing combinations but his opponent was avoiding the worst of it and occasionally flicked out a jab which forced the heavier hitter to reset himself.

A big left hook rocked Parodi at the beginning of Round 4 and Frampton followed with solid hooks to the body and a sequence of well-timed uppercuts to the head on the inside. A damaging burst of right hands also opened a cut over Parodi’s left eye, as the more talented fighter went through the gears in style.

The cut continued to worsen in Round 5 as Frampton had yet more success with sharp right hook leads. It was simply no contest and everything the Irishman attempted was working to the delight of his home support who produced incredible noise whenever their man released a punch.

The sixth round was more of the same when Frampton let go with the perfect shot which ended the contest. The body punch wasn’t swung in with aggression, but placed with the confidence of a chess player who moves his piece calmly into a check mate position.

It was the first time the Frenchman had ever been stopped in a professional fight.

On first glance Parodi, who was making his debut outside of France, had an impressive resume, with only one loss in 37 professional fights. It was only when you brought out the microscope that cracks appeared, including a low KO ratio (9 stoppages for 26%) and a line-up of moderate opposition.

Non-punchers are made for a fighter of Frampton’s style and, as a result, several experts had predicted an early night for the Belfast star. “The Jackal” is a classy aggressor, with world-class smarts, and if you lack the power and talent to dissuade him then he will snap you like a wishbone.

This may only have been his 17th pro outing but Frampton was a standout amateur and his learning curve as a professional has been impeccable. Former world featherweight champion, Barry McGuigan, has managed him well and trainer, Shane McGuigan (Barry’s son), continues to add strings to his bow.

“We have a special talent here,” said Barry McGuigan. “We’ll go out to Spain to watch (Kiko) Martinez vs. (Jeffrey) Mathebula and we will offer the winner a lot of money to defend against Carl in Belfast.”

If Kiko Martinez does retain the title, far from guaranteed, then Frampton would have reason to be confident going into his first world championship fight. Six months prior to Martinez’ recent upset title win over Jhonatan Romero, the game Spaniard was stopped by Frampton in nine rounds.

“The Jackal” would undoubtedly start as favorite in a rematch.