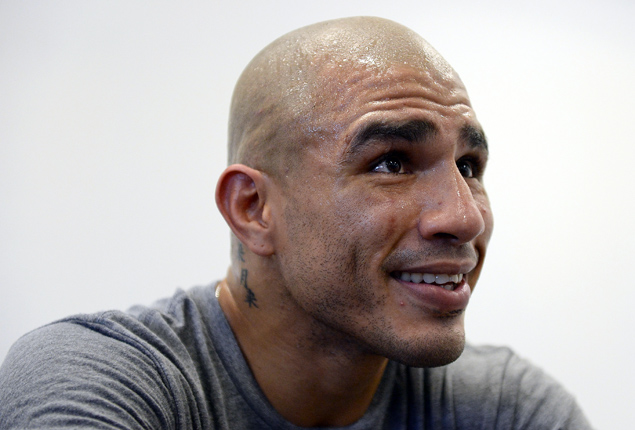 Miguel Cotto smiles during an open training session for his Saturday fight against Delvin Rodriguez at Wild Card Boxing Club on Sept. 18 in Hollywood, Calif.

Miguel Cotto has won four world titles in three weight classes during a fabulous career that has seen him take on many of the best fighters of this era. The Puerto Rican star has never avoided anybody while amassing a very respectable record (37-4, 30 knockouts).

With his 33rd birthday looming and coming off back-to-back loses to Floyd Mayweather Jr. and Austin Trout, Cotto, who has millions in the bank, could be forgiven for taking things easy and going quietly into the night. However, if there’s one thing we know about Cotto that’s not his style.

Though he’s thinking of life after boxing he’s not looking for an exit strategy just yet and intends to win another world title before bowing out.

Having worked with Golden Boy Promotions for the Mayweather and Trout bouts he’s switched back to his original promoter, Top Rank, for his fight with Delvin Rodriguez this Saturday at the Amway Center in Orlando, Fla. The 12-round junior middleweight bout will be televised live on HBO (in the U.S.).

“I don’t think nothing at all of his style,” said Cotto, when asked what he thought of Rodriguez. “I am preparing myself to be 100 percent. Delvin Rodriguez is our next opponent and I am preparing to be the best Miguel Cotto.”

Recently RingTV.com caught up with Cotto to get his thoughts on several things including his most recent fights, his proudest moment in boxing and his return to the ring this Saturday.

Anson Wainwright – Last December you took on Austin Trout and he managed to beat you. Looking back, what are your thoughts on that fight?

Miguel Cotto – I don’t take nothing from him. He was better than me. We had a bad night.

AW – How are things? What have you been up to since?

MC – I’ve been doing good, spending time with my family and my businesses. We have gas stations, real estate and the promotional company.

AW – You make your return on Saturday against two-time world title challenger Delvin Rodriguez. What do you think of him as a fighter?

MC – I don’t think nothing at all of his style. I am preparing myself to be 100 percent. Delvin Rodriguez is our next opponent and I am preparing to be the best Miguel Cotto. 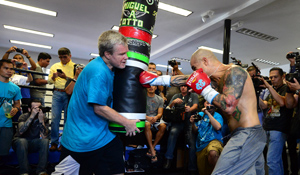 AW – You’re working with Freddie Roach for this fight. How is that going?

MC – It’s going good. We have a good chemistry going. Freddie and I have learned to communicate, thank God. The professionalism that Freddie has, the respect he has in the boxing community, that’s what I need to put my career back on track.

MC – Well, you know I began originally with Top Rank. They made me the boxer I am now. I believe in them.

AW – You fought Floyd Mayweather on Cinco de Mayo in 2012 and you gave him one of his toughest fights. Looking back, what are your thoughts on fighting Mayweather?

MC – It was a great fight and a great night. We both had a great performance. This is a sport that can be judged by appreciation. I don’t take nothing from the decision.

AW – If I can take you back, you beat rival Antonio Margarito in late 2011. What are your thoughts on that fight and on Margarito?

MC – It was a great fight. We did what we needed to do to have the victory. It was very satisfying.

AW – Who are the key members of your team?

MC – My team members are Hector Soto, who is a boxing promoter and Vice-president of Miguel Cotto Promotions. He runs all my business. He was the person that my father left in charge of it all. Bryan P├®rez is my right-hand man. He is the Executive Director and runs day by day MCP together with Hector. Gabriel Pe├▒agaricano is our legal adviser in everything. Juana Vazquez is my mother and the person who represents the figure of my dad.

AW – What was your youth like growing up in Caguas?

MC – I was like any other kid, very normal I can say. I just was a simple kid that came from a humble family, and was taught by my father to be a family man and be committed to them. I stepped into boxing following my older brothers.

MC – It was a great experience (fighting at the Olympics). I had a great career. I finished with a record of 125 wins 23 losses. I won different national championships in Puerto Rico and silver medal in the Youth World Championships in Buenos Aires, Argentina in 1998.

AW – You’ve achieved more than most fighters can dream of. What other goals do you have for the rest of your career?

MC – I have accomplished a lot, but I want to become a world champion again.

AW – What activities are you involved in away from boxing that you will pursue when you retire?

MC – I have a boxing promotional company that will keep me working in boxing.

AW – In your career to date, what has been the proudest moment for you personally?

MC – Winning my first world championship. Winning the first championship is a goal for any boxer and it means a lot to reach it.

AW – Tell us about yourself and your life away from boxing?

MC – I am a really quiet person, I just like to be with my children and my family and being home. I live one day at a time, enjoying the best of life, just living.

AW – Who were your boxing heroes growing up and why?

MC – I think Wilfredo G├│mez and Roberto Duran just because they fought the best and gave it their all.

AW – Finally do you have a message for the boxing world and your fans?

MC – I just want to say thank you for all their incredible support over my career. There’s still more to come.

Photos / Harry How-Getty Images,Frederic J. Brown-AFP
Questions and/or comments can be sent to Anson at [email protected]and you can follow him at www.twitter.com/AnsonWainwright.