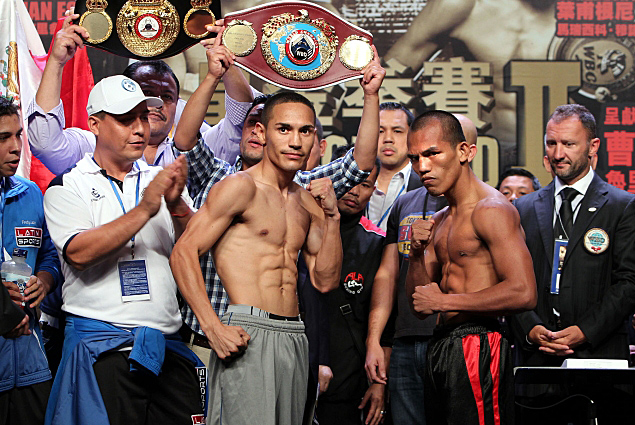 WBO/WBA flyweight titleholder Juan Estrada (left) poses after weighing in for his title defense against Milan Melindo (right), which takes place in Macau on Saturday

For several years now Bob Arum has floated the notion of taking boxing to Macau, an opulent gaming and resort paradise situated in the South China sea. Nothing came of it until recently when Top Rank signed Chinese amateur hero Zou Shiming.

The move primed them to dip their toe in to the considerable Asian market. In doing so Zou made an estimated $300,000 for his pro debut. Of course, he needed a supporting cast to which two world titles were added to the card. One of which was WBA/WBO flyweight titleholder Brian Viloria, who had been on a nice run, meeting Mexican challenger Juan Francisco Estrada. It was expected that Estrada would give Viloria some trouble – after all his two career loses were against world champions Juan Carlos Sanchez Jr. and Roman Gonzalez. Estrada gave Gonzalez all he could handle for 12 frenetic rounds last November.

However, many believed that finally Viloria had found his stride as a pro and would know too much for the 23-year-old upstart, but “El Gallo” had different ideas, winning a deserved split decision by scores of 117-111 and 116-111 against the abstaining judge 113-115. Estrada upped his record to 24-2 with 18 stoppages, collecting the WBA and WBO titles in the process avenging his countrymen Julio Cesar Miranda, Giovani Segura, Omar Nino and Hernan Marquez all of whom Viloria had beaten in his previous four fights.

It seemed only natural that Estrada’s first title defense would be back in Macau where he meets unbeaten Filipino contender Milan Melindo on Saturday. The card, dubbed “Fists of Gold II,” is headlined again by Zou, along with Evgeny Gradovich making the first defense of his IBF featherweight crown against mandatory challenger Mauricio Munoz. The HBO 2 broadcast of the show starts at 5:30 p.m. ET/PT.

Anson Wainwright: Back in April you stunned Brian Viloria, relieving him of his WBA/WBO flyweight titles. Could you tell us about the fight? 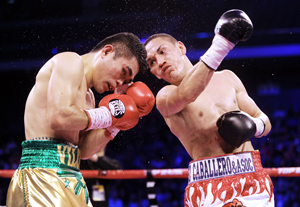 Juan Estrada: It was a very tough fight but I knew I had a really good chance of winning. Obviously, he was the champ and I could tell the people at the arena were rooting for him but I went to China for nothing less than a win. Myself and my team were focused on that goal and that’s the way it turned out.

AW: What did it mean to you when the third score was announced and followed with “ÔÇª and new WBA/WBO flyweight champion”?

JE: I wasn’t too surprised because I felt I had given it my all but even then, after hearing the official announcement it’s something that made the whole team very happy. Even after a judge gave the fight to Viloria we knew we had worked really hard and proved ourselves to everyone and thanks to God we won the fight on points.

AW: Has your life changed much since becoming a world champion?

AW: You return to Macau taking on Milan Melindo. What are your thoughts on that fight? He also fought in Macau in April. What do think of him as a fighter, his strengths and weaknesses?

JE: We’re going back to fight there at the same arena. We’ve been working very hard and are concentrated on Melindo, who’s a strong fighter and has good boxing skills, plus he’s undefeated with a great record. I think it’s gonna be a great fight, maybe even better than against Viloria. As to strengths and weaknesses, I think he doesn’t have as much power as Viloria but I think he could have more boxing skills than him. I think it’ll be a very good fight because I also plan to use my boxing skills and have a good game plan to use inside the ring that night.

AW: Having fought in Macau in Top Rank’s first big show and returning for the second one. What can you tell us about Macau and what it’s like to fight there?

JE: Well it’s definitely very, very different to where I’m from and I was very proud to represent Mexico out there. The first time we went out there, we didn’t know much about China. We were just focused on pulling off the win. I think this second time we’ll probably feel more at ease since we already know how it is to make that long trip, the time change, the food and everything and I think the trip will feel easier this second time for the whole team.

AW: You made a big impression last year when you fought Roman Gonzalez losing a very respectable decision. Could you tell us about that fight and how it improved you to the point you were able to beat Viloria?

JE: More than anything we went there well prepared as always. It’s just that going down to light flyweight the last couple of days really weakened me, but I still went out there and fought a great fight that I actually think I won. But he was the champion and it was a close fight, a tough fight for both of us and the judges had him ahead. Against Viloria, I again went there well prepared but this time it was at my weight division and that’s what made the difference.

AW: You were born in Puerto Penasco, Sonora. What were your younger days like growing up there?

JE: Well, it’s really a long story, but the most important things about me growing up is that I come from a very 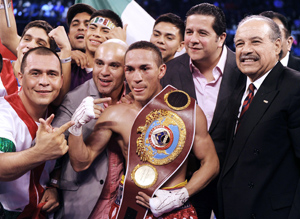 humble family but the toughest and saddest part my siblings and I had to deal with was the loss of both our parents when we were kids. Because of that, as a kid I had to grow up in different towns for a few years until I was seven and I stayed permanently in Puerto Penasco with one of my aunts who became like my second mother.

Around that time is when I started boxing but it was when I was 15 when I decided I wanted take on boxing as a way to do something to help my family. Now that we’re champions – because they’re not only my championships but my family’s and my team’s as well – I’m thankfully able to help my family out, little by little.

JE: Well, I started training when I was nine and in elementary school. My brother Jose invited me to try boxing since he started first but he didn’t end up sticking around in boxing. At 10 I had my first amateur fight and I remember feeling very nervous going up in the ring but I always took my training really serious and tried to be disciplined. I would pay attention to the type of training the pro fighters at the gym did and as a kid I tried to train as hard as them even though kids my age didn’t really do that. I’ve always liked to train really hard and I ended up making it to regional, state and national tournaments and became four-time amateur national champ.

AW: What do you think of the flyweight division? What about the other champions: (WBC/ RING) Akira Yaegashi and (IBF) Moruti Mthalane?

JE: There’s a lot of tough fighters in my division and there’s quite a few that have said they want to fight me after I beat Viloria. We’ll see what happens. I’m willing to fight anyone and whoever my manager and my promoter says I should fight I’ll fight. As to the WBC and IBF champions I really don’t know them too well and since they haven’t come up as possible opponents we haven’t studied them yet.

AW: Now that you’re a world champion what other goals do you have in boxing?

JE: Well first of all I wanna be a champion for a long time and hold on to my titles, and then as my body permits I think I’ll end up also fighting at super flyweight (115 pounds), bantam (118) and super bantamweight (1220 in hopefully a long career and god willing, win championships in different weight classes.

JE: Well after each fight I like to take a nice vacation and relax with my family and spend time at the beach. I like going to the movies a lot and just hanging out and spending time with my friends and family.

AW: Finally do you have a message for Milan Melindo and the flyweight division?

JE: Simply that I’m trained very hard and I didn’t take him lightly. I know him well as a fighter and that he’s a very tough fighter. But we know we have what it takes to beat him and we’re going to be training very hard to retain our titles for a long time.