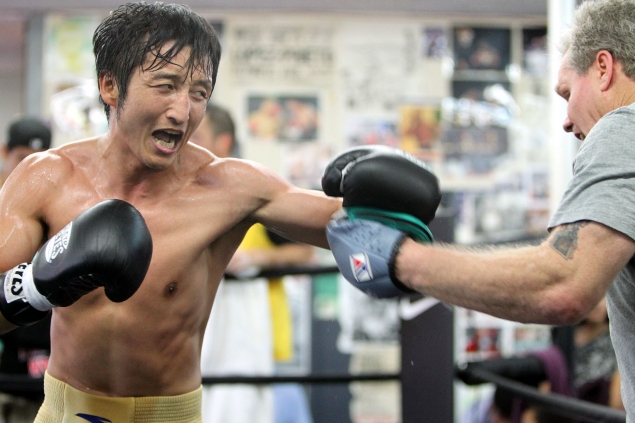 While Freddie Roach is often delighted with the championship potential he sees in two-time Olympic gold medalist Zou Shiming, there are times when the trainer is frustrated by terminology that can get lost in translation, or with the Chinese flyweight’s tendency to revert to an amateur style.

“The translation is very difficult, because the thing is, sometimes the translator doesn’t really understand what I’m saying. You know? The thing is, they don’t understand boxing talk,” said Roach of his conversations with Zou (1-0), who will be the focus of Top Rank’s second card in Macau, China.

“The translator hasn’t been here in a couple of days, and I’ve had his wife. So we were going over the footwork, and he wasn’t getting it … I don’t think that she was really understanding what I was meaning. So I told her to go away and I just showed him. I just said, ‘This is what I want.’ I made him copy my stance. I said, ‘This is what I want.’ Sometimes, he doesn’t sit down on his punches a little bit, so he’s a little too high.”

Roach shared his thoughts during a Thursday open workout at Wild Card Boxing Club in Hollywood, Calif., where Zou was preparing for his second career bout against Mexico’s Jesus Ortega (3-1, 2 KOs), along with IBF featherweight titleholder Evgeny Gradovich (16-0, 8 KOs), who will attempt his first defense against Mauricio Javier Munoz (26-3, 12 KOs).

Click here for the video interviews from Thursday’s workout.

At his best, Roach said Zou reminds him of ex-beltholder Brian Viloria, who was dethroned as WBA and WBO flyweight titleholder Juan Francisco Estrada by split decision on Top Rank’s initial card in Macau on April 6, where Zou decisioned Eleazar Valenzuela. Estrada will make his first defense against Milan Melindo on July 27.

“[Zou] is a really good boxer and he has really good speed, and he can sit down on his punches, and he punches really hard when he wants to. So he reminds me a little of Brian Viloria, I feel, because when him and Brian box, sometimes he gets the best of Brian, sometimes Brian gets the best of him. It’s back and forth.” said Roach.

“I really have high hopes for him. But then sometimes when he goes in with an ordinary guy, and he goes back to the amateur style, I get frustrated. So it’s a little back and forth…He’s gotten better and better. The more time he spends with me, the more that he understands. So he’s getting better and better. He’s kind of forced into an issue where he has to understand me. So it’s not that serious where I have one hand behind my back yet, but it’s a little difficult and sometimes frustrating.”