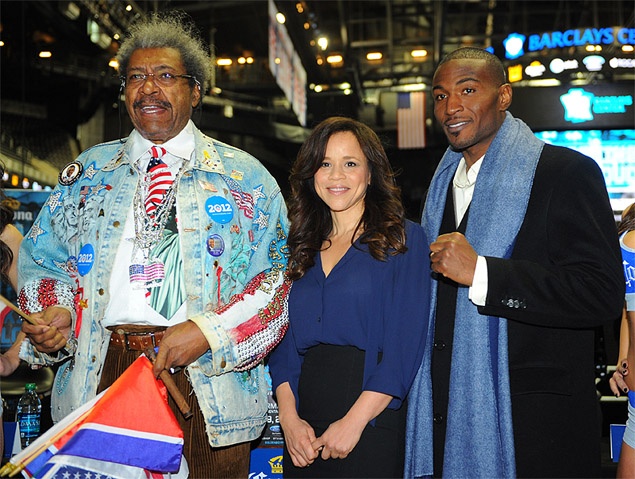 There are famous boxing fans, and then there is Rosie Perez.

Made a household name by movies such as Do the Right Thing and White Men Can’t Jump, and nominated for an Oscar for her role in Fearless, the actress has embraced boxing as much as any celebrity and has an impressive following of fight fans on Twitter.

She even served as grand marshal of this past weekend’s International Boxing Hall of Fame parade, an honor that caught her off guard.

“I was beyond surprised,” Perez told RingTV.com.

“Steve Farhood contacted me and said (Showtime Sports executive VP) Stephen Espinoza gave him my e-mail. He told me they were throwing around names for this and my name came up. I asked, ‘Why me?,’ and he said he thinks I’m great for boxing.” 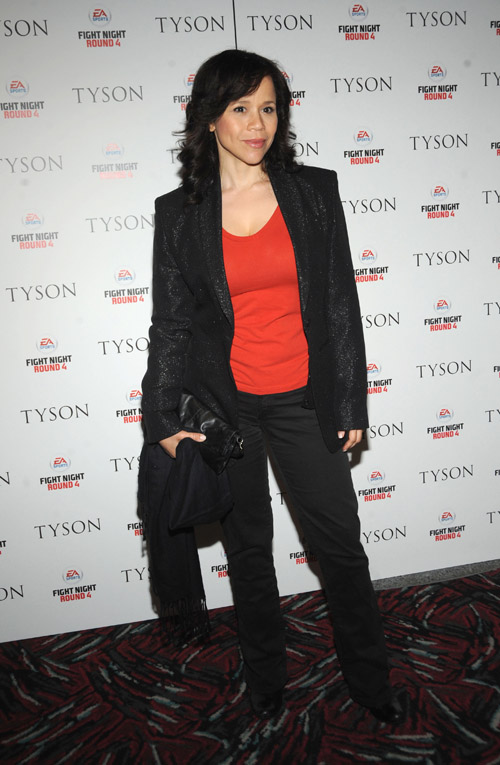 Though Perez’s connection to boxing has only become well-known recently thanks to social media, her fanhood goes back a number of years.

“There was a time in the early ’90’s that I used to go to the Garden a lot,” Perez said. “Someone at HBO found out I was a boxing fan and invited me to the fights.”

One such fight was the famous heavyweight war between Evander Holyfield and Riddick Bowe, about which the actress had a funny story:

“For that fight I was sitting next to Martin Lawrence, who I hadn’t seen in years,” recounted Perez. “All the other celebrities were sitting there not reacting with much emotion, and Martin and I could not stop screaming! He got a kick out of that, how I was going just as crazy as he was.”

When asked about what made boxing stand out from other sports, Perez spoke about her difficult upbringing and some of the similarities between her craft and what is necessary in becoming a quality fighter.

“I think partly because my childhood – and I was very, very poor – I didn’t have certain advantages and had to fight very hard,” said Perez.

“Even though I don’t always agree with him, I respect Floyd Mayweather Jr., and the whole “hard work, dedication” personifies what it takes to make it, in boxing or otherwise. I knew once I turned 18, it was me and life going toe-to-toe.

“As much as boxing is a physical game, it is a mental game, and life is a mental game. That is why even when the fighters are walking to the ring, I like to look in their eyes and watch for the psychological things, like if the fighter is nervous or anxious.”

Interestingly, it is largely thanks to boxing that Perez has a Twitter account at all, according to the star.

“My people kept pushing me to get one, and I really didn’t want to until I saw that Showtime was showing the tweets,” said Perez.

“We were watching a fight and I decided to tweet about it, and when Showtime showed my tweet the first time, everyone in my house screamed!”

Perez has become one of the most vocal celebrity supporters of boxing on Twitter over the past year.

“The reason I really got hooked on Twitter is, I was in Texas giving a speech and afterwards decided to fly home early to try and catch the (Danny Garcia-Erik Morales 2) fight. My flight was delayed and someone tweeted me the link and I was able to watch it.”

“After that, I just found it nice to be able to have a dialog with people that know more than I do, especially when you are just watching the fights by yourself at home. Now my people ask me if I can tweet about things other than to my boxing friends!”

Perez is no casual fan, though. What makes her different from many other celebrities is that she watches all fights, not just the ones featuring the Mayweathers and Pacquiaos.

“Unless it is a major event, I do watch most fights in replay,” said Perez. “My DVR records anything boxing. I actually suffer from insomnia, so, for instance, I was up until 2:30 the other night watching a fight on MSG between (Derrick) Wilson and (Braulio) Santos.” 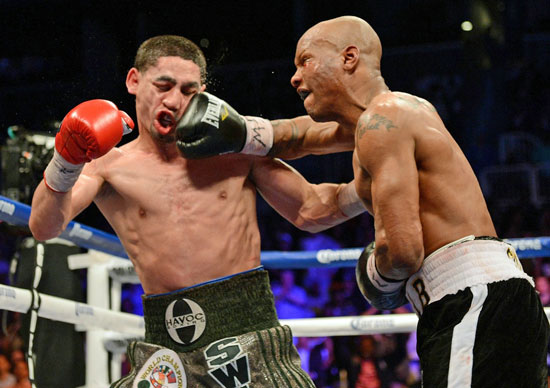 “I remember one of my Twitter followers saying ‘Rosie is afraid to say who she wants to win,’ and they were right!” said Perez. “It was really difficult because I like both fighters.”

Perez had the opportunity to go in the back and see each fighter prior to their ring walks.

“As contentious as the pressers were for this fight, I was a bit apprehensive to meet Danny’s father (Angel Garcia),” said Perez. “When I walked back there, all I saw was a man who loved the hell out of his son, and it all made sense. Part of his personality is his passion for his son and the other part was hype to help build the fight. The energy was very kinetic, teetering on nervousness. We left quickly.”

“In Zab’s locker room, it was pure calm. He was really relaxed. I also felt like he had matured as a person. I first met him 15 years ago at Shane Mosley’s fight against Vernon Forrest at the Garden, and back then his energy was off the charts. It was a great privilege to be in both camps’ locker rooms before the fight.”

Perez says much of her appreciation for the sport stems from a family member who helped her understand it better.

“My cousin Sixto Ramos is a big boxing fan,” explained Perez. “He’s one of the reasons I’m a big boxing hardcore addict. We both studied martial arts but he really is into boxing.”

“About 20 years ago, he started breaking down the sweet science for me,” continued Perez. “It actually brought us closer together. Now he jokes that I know more than he does!”

The actress wanted to get one thing straight.

“There are a lot of women into boxing,” Perez said. “99.9 percent of what I hear on Twitter is positive, but you get those few who find it odd a woman appreciates boxing. I just let it roll off my back, but there are many of us out there.”

“There was one fight that I brought two girlfriends to,” recalled Perez. “One of my friends in the middle of it said she had to leave because she couldn’t watch anymore. I said, ‘Okay, see ya!'”

“In my house, when we have fight parties, you have to be a real fan. If you’re not, if you’re one of those that asks why I enjoy it, I’ll tell you to get out.”