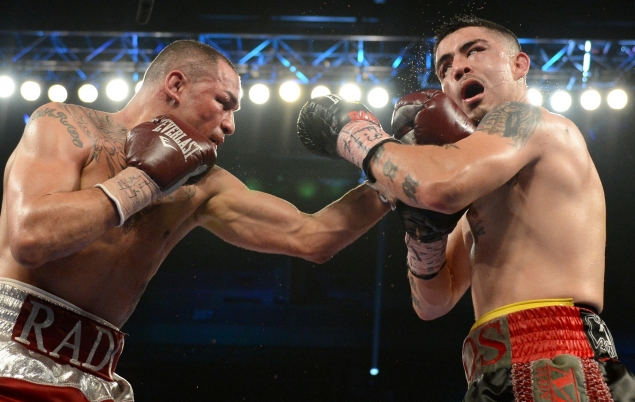 An immediate rematch between Mike Alvarado and Brandon Rios does not look to be in the cards, despite Rios’ very vocal demands about getting one just moments after Alvarado’s hand was raised after their thrilling rematch, according to Top Rank CEO Bob Arum.

Though it was another action bout, one that will be a frontrunner for Fight-of-the-Year honors, Arum said he’d like to see the two of them take a minute apart and face some fresh faces. 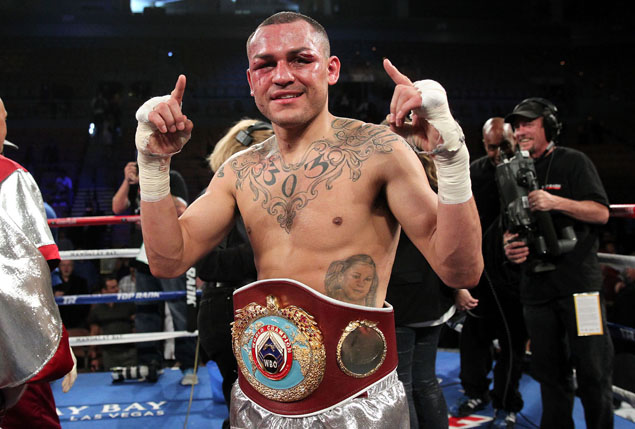 According to multiple sources close to the situation, Top Rank would love to take Alvarado (34-1, 23 KOs) to his hometown of Denver and see if they have a ticket seller there following his recent run of consistently action-packed fights. The level of opponent they have indicated to RingTV.com they’d like to match with him is not of the level of his last few.

One possible name being floated is Brooklyn’s Gabriel Bracero (21-1, 4 KOs), who is promoted by Lou DiBella. In fact, Bracero’s name was brought up when WBA champion Khabib Allakhverdiev fell out of Saturday’s card and Breidis Prescott was out of an opponent. When it was suggested that Terence Crawford step in, another idea was floated as well.

The idea was for Crawford to fight Bracero instead, with Crawford getting a lesser amount of money than he would have to fight Prescott. By the time it looked like an agreeable solution, Crawford’s team, or part of it, had already accepted the Prescott fight.

Bracero is tough but limited, having been dominated by former titlist and current gatekeeper DeMarcus Corley in January of last year. He’s since bounced back against lesser opposition, but would be a tuneup level opponent for Alvarado before a projected rematch, perhaps in Denver, to close 2013.

Beltran to face Meza-Clay on April 27

Lightweight contender Raymundo Beltran has been slated to fight on an April 27 UniMas SoloBoxeo date for a couple of weeks, but no opponent had been announced. Pennsylvania’s Monty Meza-Clay, who hasn’t lost since 2009, has gotten the call, according to his trainer Tom Yankello.

Beltran (27-6, 17 KOs), who is mostly known for being a primary sparring partner of Manny Pacquiao for many years, had perhaps the best year of his career in 2012. Though he officially lost a decision to Luis Ramos in January, many felt it was a close fight that could’ve gone either way. That exposure helped get him an ESPN2 Friday Night Fights main event in July against Hank Lundy. Beltran was able to edge Lundy on points in a minor upset. Beltran closed the year with a decision over Ji-Hoon Kin in December, climbing off the canvas from a bad knockdown in the opening round to win.

Crawford to possibly return in July 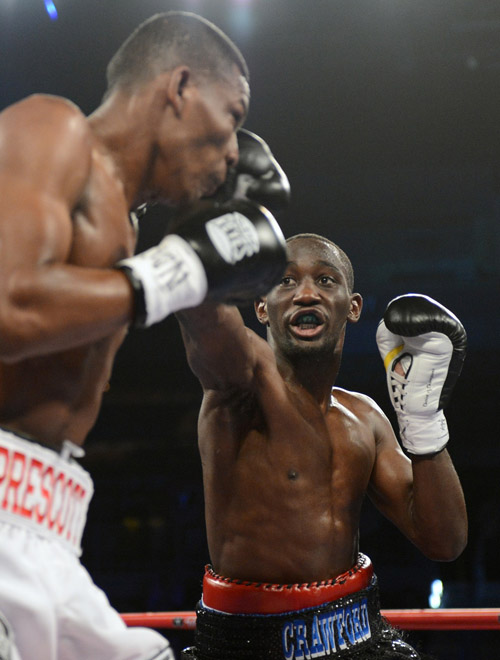 Arum was asked by this reporter about what the next move could be for Crawford, given that he is now expected to fight quality opposition after soundly defeating his first established opponent. Arum said he had no plans to have Crawford take a step back, and expects him to return in the summer, possibly as early as July.

One name that Arum mentioned as a possible opponent for Crawford is the aforementioned Beltran, saying that it “would be a helluva fight.” Another Top Rank executive indicated to RingTV.com moments after Crawford’s win that perhaps Mercito Gesta would fit as an opponent for Crawford. Both would be good matchups for the newly established contender, who despite beating Prescott at 140 pounds, wants to continue to campaign as a lightweight.

Two fighters from the managerial stable of Frank Espinoza will return to action on the June 8 undercard of Marcos Maidana-Josesito Lopez, with both fighters coming off a different set of circumstances. The card takes place at the Home Depot Center in Carson, Calif.

Featherweight Ronny Rios (20-0, 9 KOs), of Santa Ana, Calif., is coming the best win of his career, having defeated former 122-pound beltholder Rico Ramos by 10-round unanimous decision back in mid-January. That fight, which was aired on ShoBox, was a close one, but Rios did clearly enough to deserve the win. The 23 year old is quickly rising up the rankings, particularly after grabbing a vacant regional belt against Ramos. He could be in contention for a title opportunity by the end of 2013.

On the other side of things, lightweight stablemate Luis Ramos, also from Santa Ana, will return on that same card following the first defeat of his career. Last December, Ramos (23-1, 10 KOs) was cut on both his right and left eyes in a fight against former U.S. Olympian Ricardo Williams Jr., and the fight was stopped by the doctor at the end of the fifth round. Williams had been down earlier in the fight, and if the cuts would have been ruled as caused by a headbutt, Ramos would have possibly won a technical decision. Instead he has the first blemish of his career. Ramos will fight on the June 8 card, likely against an opponent that’ll get him back in the win column without much problem.

Newly signed to Espinoza Boxing is former multi-divisional titlist Vic Darchinyan, who is slated to fight April 20 on the Zanfer undercard to Victor Terrazas-Cristian Mijares in Mexico City.

No opponent as of yet has been found for Darchinyan (38-5-1, 27 KOs), who could possibly be moved to a different card, according to a source at Zanfer. Darchinyan is coming off an HBO-televised win over Luis Orlando Del Valle back in September.

At 37, Darchinyan hopes he has one last title run in him. His name was mentioned as a possible opponent for IBF 122-pound titlist Jonathan Romero, but according to Frank Espinoza Jr., that fight doesn’t look likely, at least in the immediate future.

The 23-year old Adams (9-0, 5 KOs) fought five times in 2012, but not against anyone as capable as Hirsch. Hirsch (14-5-2, 6 KOs) has been around the block, but usually gets calls on short notice and in weight divisions he doesn’t belong.

For this fight, Hirsch has been in camp with Virgil Hunter’s solid stable of fighters after joining up with manager Marlon Sullivan, who handles fellow Bay Area native Karim Mayfield, who is ranked at junior welterweight. He’s been in with US Olympians Demetrius Andrade and Shawn Estrada, losing decisions both times in game efforts.

The card is promoted by Bobby D Presents and will be headlined by a six-round junior welterweight bout between unbeaten local Emmanuel Robles (7-0-1, 2 KOs) and the dangerous Joshua Marks (8-4, 8 KOs).