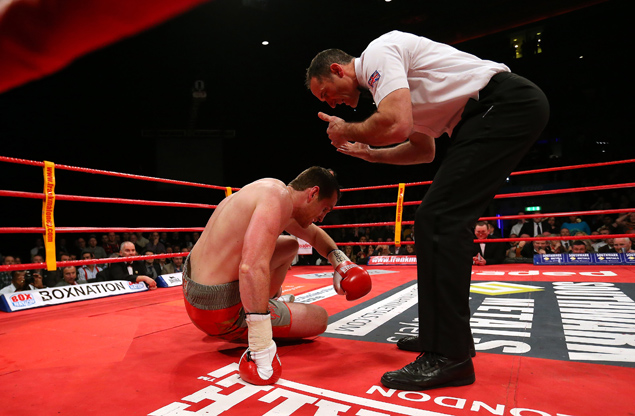 LIVERPOOL, England – David Price was sensationally knocked out by American veteran Tony Thompson in the second round of their scheduled 12-round bout at Liverpool’s Echo Arena on Saturday night. The fighters weighed in at 247 and 262 pounds respectively.

The end came when Price (15-1, 13 knockouts) was caught by a thunderous right hand counter punch. The referee, Steve Gray, counted to nine but although Price found his feet he was woozy and in no position to continue. Thompson (37-3, 25 KOs) screamed “I told you” to press row and mouths sprang agape in every direction. The official time of the stoppage was 2:17. 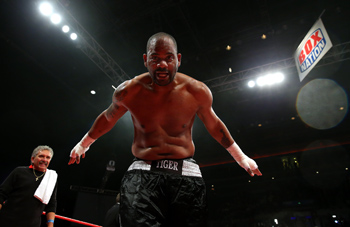 Thompson, who acquitted himself well in at least one of his two losses to RING heavyweight champ Wladimir Klitschko, came to the UK with a respectable reputation but nobody could have foreseen such a shocking result.  Price, a prodigious sight who strikes fear into the opposition, was on the wrong end of a quick knockout tonight and his reputation is in tatters.

Price towered over Thompson at ring centre as his home support chanted soccer style before the opening bell.  Both men looked tentative but Thompson merely tapped his opponent out of the southpaw stance, whereas Price unleashed a powerful jab and two right hands whichmomentarilystartled the American.

In the second round Price opened up a bit more, smashing Thompson with a right hand before unloading heavily to the body with a flurry of hooks. Thompson gave a knowing smile and circled to safety and shortly thereafter the punch that silenced an arena landed with an audible thud.

Price and the equally monstrous, Tyson Fury, were being touted as the future of the glamour division but, for the moment, you can remove Price from the equation.

“I’ve got to be realistic about what happened but I’ve got time and it’s happened to the best heavyweights,” the vanquished Price said during a hastily arranged post-fight press conference.

Price’s manager Frank Maloney, who was understandably deflated, was a less charitable when it came to Thompson’s incredible win.

“David has the mentality to comeback – this was a freak punch.”

It is difficult to tell where he goes from here but the vibe at press row was a complete rebuild from scratch. Former heavyweight champ and recent hall-of-fame inductee Lennox Lewis rebounded from an eerily similar second-round knockout to Oliver McCall, but he was firmly established on the world scene at the time.

There will be no title fight of any kind for Price in the near future.

Thompson, at 41 years of age, is back with a vengeance.  A third fight with Wladimir would be redundant but he deserves a big payday after such an astonishing performance.  Perhaps Fury, should he prevail against Steve Cunningham on April 20.

The old axiom, it only takes one punch to change a fight, was very appropriate tonight in Liverpool.

Tom Gray is a member of the British Boxing Writers’ Association and contributes to various publications. He compiles the boxer profiles and fight breakdowns for Frank Warren Promotions’ official fight programmes. Follow him on Twitter: @Tom_Gray_Boxing