Donaire confident scientific training will aid his victory over Nishioka 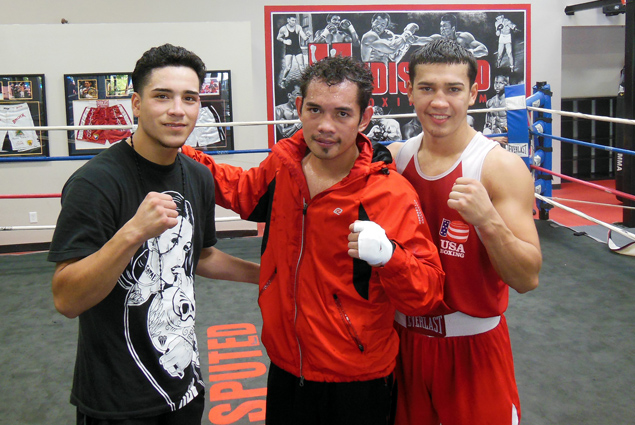 SAN CARLOS, Calif. – Nonito Donaire bounced around his gym “Undisputed” in Northern California with a resistance band attached to his waist, the other end fastened to a foundation column 20 feet away.  “The Filipino Flash” danced side-to-side, circled, and threw punches, mimicking his track work with renowned sprint coach Remi Korchemny, who has worked with numerous U.S. Olympic athletes dating back to the 1970s.

Donaire (29-1, 18 knockouts) is readying for his toughest test to date on this Thursday afternoon, a match with Japan’s Toshiakai Nishioka, a man who hasn’t tasted defeat in over eight years. The bout will be for the vacant RING 122-pound championship, but Donaire is as confident as ever as he approaches the fight at the Home Depot Center in Carson, Calif. on Saturday (10 p.m. ET, HBO).

“He’s a smart guy, but I think I’m a genius,” Donaire proclaimed to RingTV.com. “He’s going for the home run, I’m going for the grand slam. If he gets a lot of strikeouts, I’m getting a shutout. I just have that positivity, that mentality that I can conquer whatever he gives out.”

The 29-year-old Philippines native knows he hasn’t fought someone like Nishioka and noticed a few things on tape that impressed him.

“He’s strong. He has a good straight power punch and it’s really clear he can knock people out with that straight punch,” admitted Donaire. “I’ve never fought a guy who can knock guys out with just one punch. [Vic] Darchinyan was powerful but it takes him a long time to knock people out. He drains, he tires them out before he knocks them out. With this guy, he can take you out [the same way] I take out guys. This fight is definitely interesting but I know I can do the same things and beyond.”

Everyone is aware of Donaire’s athletic gifts, but DeLeon was surprised by his mental strength in the squared-circle. 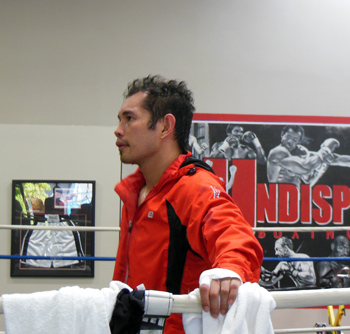 “He makes me think a lot in there, he’s a really smart fighter,” said DeLeon, who plans to turn pro before the end of 2012 at either 130 or 135 pounds. “He punches hard, he’s got great speed. I’m learning more and more every time I spar with him. His hook’s great, he’s getting his right hand sharper. He’s good at everything. He can box, he can bang. He punches you from different angles so you gotta be aware all the time.”

“It was very hard sparring. He’s quick, he’s fast and he hits hard, too,” said Diaz. “His right hand surprised me and his hook was good too. He surprised me with his punches.”

Donaire has been working with Korchemny and supplement guru Victor Conte since his December 2010 fight with Volodymyr Sydorenko. How many miles does Donaire run per week? 25, maybe 20? Try zero. He’s seen great results, abandoning running for sprints, which develops fast-twitch muscle rather than slow-twitch muscle fiber. Coupled with a specialized nutrition program with Conte, Donaire has seen performance gains in the gym and in the ring.

“He introduces a lot of positive mentality and the scientific ways of working smart, rather than working hard,” Donaire explained. “You have to work hard, but you have to work smart as well. Before I met Victor I just did the traditional [workouts]. Now I do a lot of physical training , a lot of strength training. Most of all we’ve done things that are smart. Putting the right stuff in my body, recovery, and knowing that recovering is as hard and as important as training hard.”

Working with Conte and Korchemny of course has its detractors. Conte served time in prison and Korchemny was sentenced probation for their connections with steroids and the infamous BALCO labs. Conte, now on the other side of the fence in a crusade to clean-up amateur and professional sport, supplies Donaire with legal supplements from his company SNAC (based in San Carlos, just miles from Donaire’s gym). In the face of criticism, Donaire voluntarily signed up with testing agency VADA for year-round random drug testing to prove he’s a clean athlete.

“I love the sport of boxing, it gave me everything I have: The people that I met, the things that made me happy.  And it’s the least that I can do for myself and for the fans,” Donaire explained. “Hopefully we can inspire a lot of athletes out there to do the same thing for the sports that they love.”

Conte introduced Donaire to hypoxic training, where Donaire is hooked up to an oxygen mask that gives him a deficit of oxygen, simulating the effects a boxer would get from running in high elevation. It results in an increase of red blood cells in the athlete, giving Donaire increased stamina.

“I can go 20 rounds. One thing that I gained with the hypoxic training is it makes you do circles and go 12 rounds in Mount Everest,” said Donaire. “It increases your red blood cells, you’re able to take more oxygen in your system no matter how tired you are. The guys that I’m sparring , they’re no walk in the park, they’re good prospects. They go all out in sparring and then I have another guy fresh coming in and I feel good and I can tire them out no matter what.

“Hypoxic has increased my acceptance of oxygen. My stamina has increased; especially in the later rounds, I can push myself. I feel like I’m stronger each round. “

Donaire can be tested at any time by VADA and Conte said Donaire jumped at the opportunity to show he’s a clean athlete.

“There’s been a lot of guys that have tried to come into the VADA program and have had sponsorships offered to (do so) and they always gotta talk to this guy or that guy. Nonito is his own man,” said Conte, who sponsors the athletes he works with, rather than being paid. “He makes his own decision. It wasn’t about calling and asking Bob Arum if he can do that VADA testing. He’s a true leader and he’s leading by example with VADA and he deserves a lot of credit for it.”

Conte has Donaire wearing a memory belt during training. It measures caloric expenditure, breath frequency, V02 max, ventilation, heart rate, etc. They collect the data both during Donaire’s track work and then when he’s in the gym sparring and training. The information is loaded to a television in the SNAC conference room where they examine the data at the beginning of camp, in the middle of camp and at the conclusion. He also collects the date with Donaire both on supplements and off supplements. After comparing, they have an index of Donaire’s physical fitness, so Conte can fine tune his nutrition program and training schedule and Donaire can make bigger gains in the gym. It’s this kind of next level training that has helped propel Donaire to greater heights in the sport.

“Most boxers train twice-a-day, six days a week – way over trained. The greater the intensity of the training, the greater requirement for the recovery interval,” explained Conte. “The first change that I made in Nonito’s training was to tell him ‘you’re going to train Monday, Tuesday, Wednesday, Thursday you’re out of there.’

Aiding Donaire with his training is of course a strict supplement program specially designed by Conte. Donaire takes mostly SNAC products, over 20 in total. He uses ZMA to aide in recovery, Vitalyze to give him increased stamina and then also takes a number of other supplements: PhysioBalm, Proquick Tubs, Super Citrimax plus ChromeMate, Aerobitine and HypOxygen, among others. These products, coupled with the training program, have helped to give Donaire the explosiveness he seeks in the ring come fight night.

Like Donaire said “Work smarter, not harder.” If he obtains the desired results, he’ll be the new RING junior featherweight champion come Saturday.