IBF super middleweight titleholder Carl Froch said counterpart Andre Ward has no fans,” that he “can’t sell a ticket” in his native Oakland, Calif., and indicated that he would win a return bout “if the rematch ever happened.”

Froch, 35, bounced back from the loss with a fifth-round knockout of previously unbeaten southpaw Lucian Bute in May, and is set to defend his crown opposite Yusaf Mack (31-4-2, 17 KOs) in his home town of Nottingham, England, on Nov. 17.

In this video interview promoting the fight with Mack, Froch appeared to indicate that he is hungry to face Ward, yet again.

“I’m the closest guy to ever come to beating [Ward,] and I had a bad night at the office. I under-performed that night. No excuses,” said Froch.

“I lost the fight, fair and square. I can live with it. I’m quite happy with it. The rematch would be different if the rematch ever happened. But I don’t need to justify myself or make excuses.”

“I’m in there to fight and do my job and excite the fans. I was unable to do that against Andre Ward because of his style,” said Froch.

“Stylistically, he’s a spoiler. Everyone knows that. That’s why he’s got no he’s got no fans, really. He can’t sell a ticket in California, which is where he’s from, in Oakland.”

Ward also owns a decision victory from November of 2009 over Denmark’s former four-time beltholder Mikkel Kessler, of Denmark, who has won three straight, two of them by knockout, since falling to Ward. Kessler, 33, rebounded from the loss to Ward by out-pointing Froch in April of 2010.

“He’s said that if he would have fought us the way that he fought Bute, that he would have done the same thing to us. They’re just not conceding what he had to concede to, and they’re just not giving us the credit. Those two gentlemen right there, I think I could convince Andre to beat them both on the same night.”

A 2004 Olympic gold medalist who is rated No. 3 among THE RING’s pound-for-pound best behind Floyd Mayweather and Manny Pacquiao, Ward became the first man to stop Dawson (31-1, 17 KOs), whom he floored during the third, fourth and final rounds before Dawson indicated to referee Steve Smoger that he had had enough. 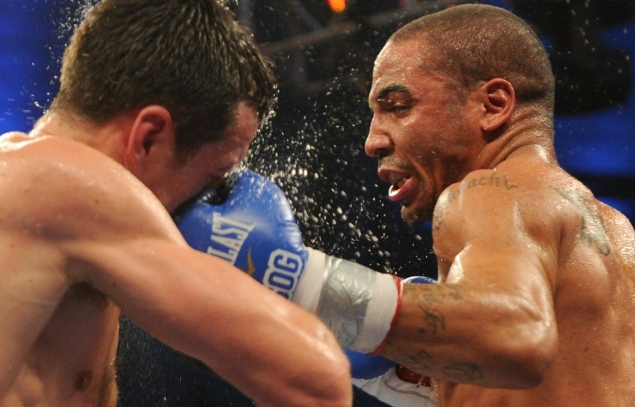 Ward fought through a broken left hand to defeat Froch, later being named Fighter of The Year for 2011 and the recipient of the Sugar Ray Robinson Trophy from the Boxing Writers’ Association of America.

“Against Chad, I thought Andre put all of the elements together. It was a display of the power that was always there in his left hook,” said Hunter, who was named the recipient of the Eddie Futch Award for Trainer of The Year from the BWAA.

“That was Andre’s best performance as far as putting all of the elements together. Andre throws that left hook with a lot of snap. We would have done that against Froch if he hadn’t broken his left hand.”

UPDATE: In other news, Ward’s camp is involved in ongoing negotiations for a Feb. 23 bout opposite former undisputed middleweight titleholder Kelly Pavlik (40-2, 34 KOs), who is coming off his fourth straight victory with July’s unanimous decision over New York’s Will Rosinsky (16-2, 9 KOs).

Pavlik burst onto the scene with a seventh-round knockout of then-undisputed and previously undefeated middleweight titleholder Jermain Taylor in September of 2007.

Pavlik was later dethroned as WBC and WBO 160-pound titleholder via unanimous decision by Sergio Martinez in April of 2010, and has since fought at or above 168 pounds.

Top Rank CEO Bob Arum, who promotes Pavlik, has been in talks with Dan Goossen, who handles Ward.