Donaire can silence critics against Nishioka 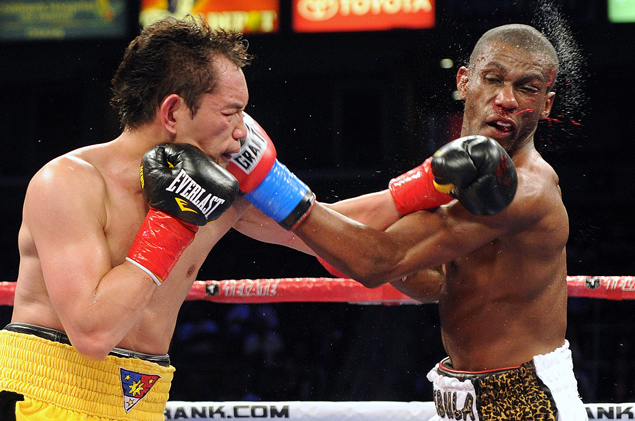 He’s been criticized, dubbed overrated and undeserving of his perch among the sport’s pound-for-pound elite.

Donaire (29-1, 18 knockouts) was slated to fight Jorge Arce in his next outing, but after failed negotiations, the 28-year-old native of the Philippines is now taking on a far tougher task. Donaire’s new opponent, Japanese veteran Toshiahki Nishioka, is expected to present the kind of challenge he hasn’t seen in some time.

In Nishioka (39-4-3, 24 KOs), Donaire will be facing the best 122-pounder in the world for THE RING’s junior featherweight championship. A clear victory on Oct. 13 at the Home Depot Center in Carson, Calif., would eradicate any doubters and place Donaire in rarified company: the recognized best fighter in multiple weight classes.

Donaire’s encounter with the 36-year-old former WBC beltholder from Tokyo will be just a tad over three months following his last bout, an uncommon occurrence for a fighter of his ilk. He hopes to bring back the “old school style of just fighting whenever we can”.

“It’s helping me mentally, making me not complacent,” said Donaire. “It keeps me working hard, going to the gym. With the long layoff, you get to relax. This time, a week or two and I’m back in the gym.”

Nishioka, THE RING’S No. 1-rated junior featherweight, hasn’t lost in over eight years and Donaire is anticipating one of the toughest challenges of his career. Since arriving at 122 pounds in 2012, Donaire has decision wins over solid titleholders Wilfredo Vazquez Jr. and Jeffrey Mathebula, but he will be facing a different caliber of fighter in Nishioka.

“He is the speed king and I am ‘The Filipino Flash’ so there’s going to be a clash of speed and a clash of power as well,” said Donaire, who is based in San Leandro, Calif. “He has a tremendous straight punch, I have a tremendous hook. He can end the fight with one punch and I can end the fight with one punch. It’s a matter of having the best game plan, having the right timing and capitalizing on mistakes.”

While campaigning at 118 pounds and below, Donaire was known for his crowd-pleasing style. But the same hasn’t been true at junior featherweight. He hopes his opponent’s pedigree and the grand stage of an HBO-televised main event will make for a riveting fight.

“[The] problem is guys who ran; Darchinyan and Montiel came to fight,” said Donaire, especially pointing to his boring bout against Omar Narvaez last October on HBO. “The champions fought and they came to win, not to survive. I think he’s going to go all out. It’s what I’m hoping for.”

After his bout with Nishioka, Donaire says he will jump to 126 if he can’t obtain a meaningful fight at his current weight.

“If we can make the fights happen with the best fighters out there, that’s what we wanna do,” said THE RING’s No. 2-rated 122-pounder. “It doesn’t matter who it is. Who we feel is number one, we want to fight them. The risk is high but that’s what makes me better – putting myself at risk.

“I want to try to clean up the division. [Guillermo] Rigondeaux might be a possibility as well as [Abner] Mares. They know that I’m willing to fight anyone out there, but it’s up to the negotiation process to make it happen. And if it doesn’t work I don’t want to just fight a nobody. I’d rather fight a guy at 126 right away, rather than staying at a weight class where I’m fighting someone who’s just there.”

When asked about a possible matchup with the two-time Olympic gold medalist from Cuba, Donaire scoffed at the notion he might be “ducking” him, as so many hardcore fans have insisted.

“His style is what I master. I’m purely a boxer. There’s no one in my life who’s ever out-boxed me,” Donaire exclaimed. “He is shorter than me so he will never be able to outbox me. If he tries to box me, it’s already my game. It has nothing to do with being afraid. Why would I be afraid? I’ve fought the best out there.”

Does Donaire feel pressure to get a knockout in the face of mounting criticism that his power hasn’t translated to 122 pounds? Not particularly.

Observers often think that a fighter saying he “can’t get up” for certain fights is a cop-out. But Donaire says the big fights “make you train harder, wake up earlier and train to the best of your ability.”

“Nishioka is one of the best out there; I’m one of the known fighters out there. We’re both intelligent fighters: it’s going to be a high-speed chess match.”