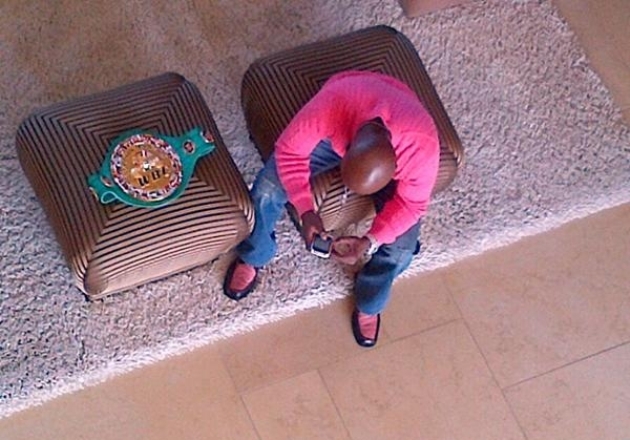 One day after telling Manny Pacquiao to “step up punk” from his Twitter account, Floyd Mayweather Jr. tweeted to the Filipino fighter again that he’s “ready to put my belt up.”

This one was accompanied with a photo of Mayweather with his WBC welterweight title belt sitting beside him as he ends his tweet with, “What about you Manny Pacquiao?”

During a week when both fighters are expected to announce that they will fight separate opponents, each camp is firing off.

But it has been Mayweather, known for his defensive wizardry in the ring, who has initiated the offense.

“Manny Pacquiao I’m calling you out. Let’s fight May 5th and give the world what they want to see,” wrote Mayweather on Tuesday. “My jail sentence was pushed back because the date was locked in. Step up punk.”

Having avoided a 90-day jail sentence until June 1, which had threatened his announced plan to return to the ring on May 5 at the MGM Grand in Las Vegas, Mayweather figured to be included a group of fighters being considered by Pacquiao, his promoter, Top Rank Inc. CEO, Bob Arum, and his advisor, Michael Koncz, as the next to face the WBO welterweight beltholder.

But Koncz told Philboxing.com that Pacquiao would not likely be available until late May or early June, citing their camp’s desire to have built a 40,000-seat, temporary outdoor venue on the Las Vegas strip in late May or early-June to maximize the revenue for a Mayweather fight. Arum does not believe that there will be enough time to construct the larger site prior to that time.

“We are not ducking the fight. From a business perspective we are not going to throw away an additional $30-$40 million,” said Koncz, responding to Mayweather’s initial tweet. “Be a man [Floyd] and step up to the plate. Fight at the end of May and the fight is done.”

In the absence of a Pacquiao fight, Golden Boy Promotions CEO Richard Schaefer has suggested that Mayweather could fight on the target date against another opponent. Schaefer named RING No. 2-rated lightweight Robert Guerrero, a five-belt winner over the course of three divisions, and RING No. 2-ranked junior middleweight Saul “Canelo” Alvarez, holder of his division’s WBC crown, as possibilities.

Leonard Ellerbe, CEO of Mayweather Promotions, told Kevin Iole of Yahoo!Sports that Mayweather’s next opponent should be announced “toward the end of the week.”

“‘I’m ready to put my belt up,” wrote Mayweather in his latest tweet. “What about you Manny Pacquiao? Let’s make history.”