History aside, Marquez has some surprises for Pacquiao 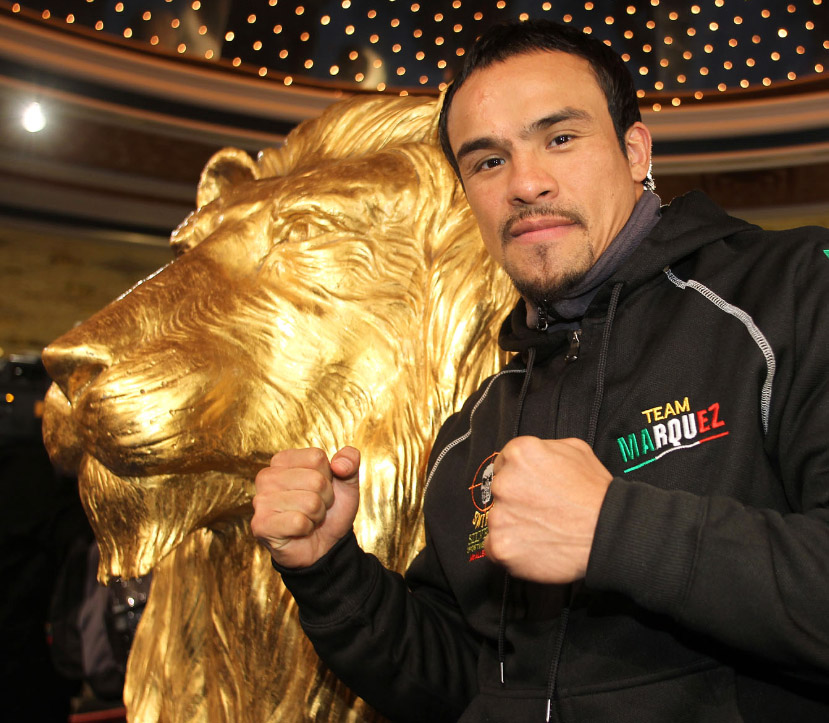 LAS VEGAS — Juan Manuel Marquez insists that he has out-boxed Manny Pacquiao twice already, and that he’ll do it again on Saturday. But this time, some things will be different.

The first time they faced each other, in May of 2004, Marquez retained his WBA and IBF featherweight belts after the fight ended in a draw. But in their second fight four years later, Pacquiao ended the night wearing Marquez’s WBC junior lightweight belt over his blood-stained trunks after a split decision was rendered in his favor.

The 38-year-old Marquez (53-5-1, 39 knockouts) gets his third shot at the 32-year-old Pacquiao (53-3-2, 38 KOs) on Saturday night at the site of their first encounter, the MGM Grand. He will again try to take the Filipino superstar’s title, but this time as a welterweight.

“There’s two warriors in the ring, and both of us want to win. The most important thing is styles make fights, and the two styles mixed together are very good. That’s why the two other fights were sensational,” said Marquez, who rose from three first-round knockdowns in their first clash, and was floored once in their second.

Owner of the WBO and WBA lightweight titles, Marquez is in only his second-ever welterweight bout, having won three straight fights since debuting at 147 pounds in a one-sided unanimous decision loss ro RING No. 2-rated pound-for-pound Floyd Mayweather Jr. (42-0, 26 KOs) in September of 2009.

Rated No. 5 pound-for-pound by THE RING, Marquez has hired a strength and conditioning coach in Angel Hernandez, whose tactics he and trainer Nacho Beristain believe will help him to increase his weight and prevent him from falling to Pacquiao, THE RING’s No. 1-rated pound-for-pound fighter.

“We have changed the weight exercises that we do. That way we’re not going to be so tight. One exercise we do with one weight and then we change it for less weight, that way we can be more flexible.”

Below are more of Marquez’s thoughts heading into his third go-round with Pacquiao.


Juan Manuel Marquez on what it is about his style that troubles Pacquiao and how Pacquiao reacts when he hits him:

“They always say that styles make fights, and I think my style happens to be difficult. All boxers have a difficult opponent, and I guess my style is the most difficult for Pacquiao.

“It’s all in my technique as a technical fighter that I’m able to do against him what others are not able to do that.
Boxing is about styles.

“It’s a perfect match between the way that I fight and the way that he fights. We just mesh very well. I will say that for me, it’s just as difficult fighting him as it is for him to fight me.”

On the four knockdowns of the previous two fights and the fact that Pacquiao’s trainer, Freddie Roach, says that Pacquiao will knock him out:

“I’m ready, and I know that he’s ready. But I’m ready for him to come after me and to be aggressive. And if he does that, then he will open up a lot of avenues for me to hit him.

“And trust me, if Pacquiao comes in wide upen, then that will leave an opportunity for me to knock him out also.”

On how he and Pacquiao have changed:

“Obviously he’s changed over the years, he uses his right hand more, he has a little more speed. But obviously I know all of that, so I’ve adjusted my work to that.

“My strategy is to nullify all of that, it’s a question of who can do it best. We know each other so well. It’s about conditioning, not being careless.

“If either one of us gets careless in there, he’s getting knocked out, so you have to be very careful in there. We know each other so well, I think that will help to make it a great fight.

“In the past, he didn’t use his right hand, and now I see that uses it a lot, with speed also, throwing hooks and uppercuts with the right hand, and we need to be careful about that.


On the difference between Mayweather and Pacquiao:

“The biggest difference obviously is that Mayweather doesn’t come to fight. He’s a defensive fighter. He’s not going to give you anything, and Pacquiao is a great fighter, a spectacular fighter who’s coming for you.

“That’s why we’re waiting for you. We’re going to be ready for him, and if he makes a mistake we’re going to make him pay for it. The other guy [Mayweather] wouldn’t make a mistake. He wouldn’t fight.”

On his fans’ support following the first two fights with Pacquiao:

“They always tell me, you won the first two fights, you can do it again. All the fans tell me, do it for us, do it for mexico.

“And that’s what I do it for. I do it for me, and my family, my Mexico, and for all the fans who have always supported me.”

On his strategy for the third fight:

“I’m going to work round-by-round. Of course we hope the judges score what they see, and not like the other two fights when they were not very impartial.

“Our goal was to make him accept the third fight, and I think it accomplished that. It’s not my fault if he gets disappointed or feels disrespected.

“The most important thing is to fight with intelligence and counter-punching. We used a lot of things in the technique and sometimes it gets complicated for Mr. Pacquiao.”

On the fact that Pacquiao did not offer him an imediate third opportunity earlier:

“I ask myself that question a lot: Why was there not an immediate rematch? There was a lot of controversy. Why didn’t his promoter offer another fight? I don’t know why. But the fight is now.

“I’m fighting this Saturday. I’m 100 percent prepared. People wanted to see me fight, and I feel very good. I know things happen for a reason. I always say what doesn’t kill you makes you stronger.