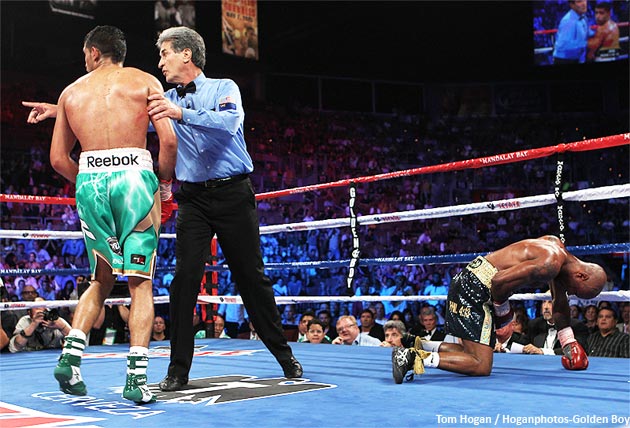 Amir Khan: The junior welterweight titleholder is proving step by step that he’s one of the best fighters on the planet. He easily outclassed Andreas Kotelnik and Paulie Malignaggi, two very good boxers. He proved his mettle by surviving a monster punch to beat Marcos Maidana. And he turned a proven commodity in Judah into his own personal punching bag, scoring a fifth-round knockout with one (legal) body blow Saturday in Las Vegas. This is only the beginning. Khan’s speed and all-around ability – as well as trainer Freddie Roach in his corner – are going to make him hard for anyone to beat. Tim Bradley? Forget it. Khan wins. Robert Guerrero? Khan is too fast. Floyd Mayweather Jr.? Welllllllll, that would be a challenge. I’ll say this, though: Khan has the tools – reach, speed, power and more resilience than we might think – to give even the most-gifted fighter in the world problems. I would love to see that fight. 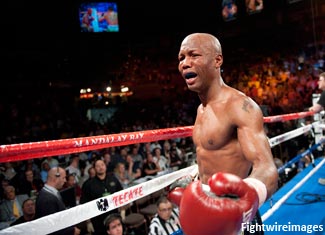 Zab Judah: The now-former two-division world titleholder seemed to have resurrected his career, winning five consecutive fights and then (after dropping down to 140) claiming another major belt. He never looked better physically, having worked with nutrition guru Victor Conte. And he had boxing wizard-turned-trainer Pernell Whitaker in his corner. Things looked good. Then the opening bell rang on Saturday and Judah had almost nothing. He showed some defensive ability, ducking under many of Khan’s punches, but he took enough hard shots to bloody his face and barely landed any of his own. CompuBox had him connecting on 20 total punches – 20!. He was overwhelmed by a bigger, faster and much better opponent. And, sadly, when he had the opportunity to quit, he did. That punch wasn’t low; it landed on the lower half of Judah’s stomach. He just didn’t want to fight any longer. Too bad. I, for one, expected more from him.

The one Judah must’ve had with himself: Of course, I wasn’t in Judah’s head when he was on all fours after the “low blow.” The conversation he had with himself had to go something like this, though: “OK, I’m getting my ass handed to me here. I can either get up and have him completely rearrange my face or I can take advantage of this opportunity and call it a night. The punch was kind of low. I could claim it was really low and that I couldn’t continue. Yeah, that’s it. I can avoid an embarrassing beating and save face at the same time. So here’s the plan: I pretend to think that the referee is giving me time to recover even though I hear him counting and then, when I hear 10, I jump up and say, ‘What the …?’” Now here’s the conversation in everyone else’s head: “Quitter.” Harsh? Yes. Accurate? That’s what everyone is saying.

Khan-Bradley: We rarely get to see the two undisputed best fighters in any division square off to determine a true champion. It can happen here if they can come to terms in a second round of negotiations, although Bradley’s promotional issues complicates matters. Who wins the fight and THE RING title? Khan. Bradley would give him much more trouble than Judah did. The Southern Californian is quick handed, awkward and resourceful; he finds ways to win fights. And he’s tough. No way he quits as Judah did. Bradley’s principal flaws? His height (5-foot-6) and limited punching power, both of which would play into Khan’s hands. The Briton has become so good at working off his long, quick jab that Bradley probably couldn’t get near him. And you have to hurt Khan to have chance to beat him. I don’t see a light puncher like Bradley doing that. Khan by unanimous decision. 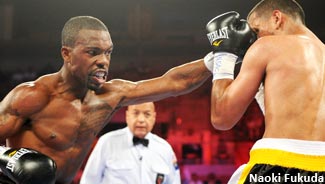 Gary Russell Jr.: The former U.S. Olympian might’ve been the most-gifted boxer on the Khan-Judah card. That’s probably what Eric Estrada would say after he was shut out by Russell, anyway. The young fighter from Chicago must’ve felt as if he was in there with Manny Mayweather, a fierce fighter with fine-tuned skills, ridiculously fast hands and considerable punching power. Get my point? The kid is good. I wish he’d tone down the boasting. For example, he seems to have bought into comments by fans that he could beat either Khan or Judah right now. Let’s not get ahead of ourselves. He hasn’t even fought a scheduled 10-rounder yet. He needs to take it a step at a time. Face better and better opposition and learn something each time out. And if things go as I expect them to go, he’ll be a legitimate threat to anyone at or near his weight class. Don’t take your eye off him.

Dirrell-Engel: First, according to Teddy Atlas, Kevin Engel had to lose 24 pounds in 11 days to make weight for his light heavyweight fight against Anthony Dirrell on the Friday Night Fights card on ESPN2. That guaranteed he couldn’t go many rounds. Second, the guy wasn’t even near Dirrell’s class. He was stopped in two of his previous three fights. And, three, he hadn’t fought in more than eight months. OK, matchmakers sometimes get desperate to find opponents. That appears to have been the case with Engel, who was a late replacement. Still, that matchup was about as bad as it gets in boxing. These are supposed to be competitive fights, not executions. And, finally, referee Lou Moret completely missed as blatant a low blow as you’re ever going to see. What a disaster! Everyone involved should be proud of themselves.

Anthony Dirrell: One thing that was lost in that dismal matchup was the ability of Dirrell, who reportedly was fighting in his first main event on national television. He seems to have boxing ability similar to that his brother (Andre Dirrell) but more power and more of a fighting spirit, although it’s difficult to guage that when he’s in with a pushover. And Dirrell (23-0, 20 KOs) obviously is fully committed to boxing again after a bout with cancer. He has fought five times in the last 10 months, which is a busy schedule. He’s obviously ready to face someone who can actually fight back, which is the only way he’s going to continue to grow as a fighter and build his reputation. No more Kevin Engels. The guess here is that he’ll become a legitimate contender, particularly if campaigns at 160 pounds and is comfortable there. A 6-2 middleweight who can box and has power? Look out.

Tyson Fury: We shouldn’t read too much into Fury’s one-sided victory over Dereck Chisora on Saturday in London. He wasn’t fighting a contender, after all. That said, his emphatic triumph was an important step in his career. The 6-foot-9 Briton (15-0, 10 KOs) demonstrated that he has more ability than many believed and did it on the biggest stage of his young career, which is why it was a very good night for him. Is he going to beat a Klitschko any time soon? No. He admitted as much. But now he’s in the equation when people talk about the better heavyweights in the world, even if that is a less-than-stellar lot. He could be in line for some big paydays in his near future, if nothing else. And who knows? Maybe he’ll continue to develop and become a legitimate threat to win a major title. It will be interesting to see what happens when he takes the next step up in competition.

Dereck Chisora:Chisora weighed in at a career-high 261 pounds for his fight against Fury, perhaps an indication that he didn’t take the big man seriously. That was a mistake. The native of Zimbabwe was outboxed and outworked, leaving him a one-sided loser in his adopted country. So let’s take stock of his career. He gained infamy when he bit Paul Butlin in a fight in 2009. He was scheduled to fight Wladimir Klitschko in December but Klitschko pulled out with a stomach injury, spoiling an opportunity of a lifetime. And now this. Not exactly a good run. At the moment, it will be difficult to take Chisora too seriously. He’ll have to go back to the gym, figure out what went wrong and make some changes. He might want to start with his commitment to training. Two hundred sixty-one pounds? C’mon.