Fight Night Club could serve as template for bigger shows 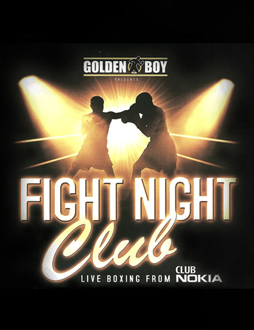 Luis Ramos, Victor Ortiz, Carlos Molina and Charles Huerta (left to right) pose after a media workout for the Thursday premiere of Fight Night Club. Ortiz and Huerta co-headline the Fox Sports Net-televised event from downtown L.A.'s Club Nokia. Ramos is also on the broadcast. Molina will be on the non-televised portion of the card. Photo / Scott Kilbride

After being involved with some of the biggest events and highest-grossing fights in boxing history, you’d think Oscar De La Hoya wouldn’t get too excited about a club show series, even one staged by his own promotional company.

However, the president of Golden Boy Promotions was almost giddy when he talked about Fight Night Club at Tuesday’s final news conference at the show’s venue, Club Nokia in downtown Los Angeles, where the second season of the series kicks off on Thursday.

De La Hoya explained his enthusiasm for the seven-bout card, which is headlined by junior welterweight standout Victor Ortiz and will be broadcast on Fox Sports Net (tape-delayed) and streamed on RingTV.com.

“Fight Night Club is the blueprint for our major shows down the road,” De La Hoya said. “It’s already on its way to being a hot ticket, the place to be in L.A. on a Thursday night, and it’s a combination of things that have made it a success. There’s the club atmosphere with the music and the lights. There are famous entertainers and world-class fighters walking around the club, mingling with crowd and the fans. You’ve got fighters and fans taking pictures with the ring card girls. It’s all a lot of fun, but at the same time the fights are all exciting.

“In order for us to be successful with our big shows, I think we need to take a look at how Fight Night Club operates and emulate it.”

In other words, De La Hoya wants the atmosphere at Golden Boy’s big events to be as lively between fights as it is when the ring action is underway. Often, that isn’t the case at big boxing matches, which is one reason UFC, which invests heavily in its live production, does so well at the gate.

However, the appeal of Fight Night Club goes beyond the live atmosphere. At its core the series is about developing local talent while cultivating hometown fan followings for the up-and-comers.

On Thursday, a raucous group from Oxnard, Calif., will be in the club to cheer Ortiz (25-2-1, 20 knockouts) on during his stay-busy 10-round welterweight tilt with Hector Alatorre (16-8, 5 KOs). There will also be a large and loud block of fans from Paramount, Calif., to root for featherweight prospect Charles Huerta (12-1, 6 KOs), who takes on Guadalupe DeLeon (8-9, 4 KOs) in the six-round co-featured fight.

Both 23-year-old fighters will welcome the hometown encouragement as they continue their comebacks from devastating knockout losses suffered last summer.

In the highest-profile matchup of his 5¾-year career, Ortiz was overwhelmed by relentless Argentine banger Marcos Maidana in a six-round shootout that thrilled fans at Staples Center, across the street from the L.A. LIVE complex that houses Club Nokia.

One month later, in July, Huerta was knocked into the ropes by a single left hook by fellow unbeaten prospect Derrick Wilson 50 seconds into their Fight Night Club main event. The bout was waved off nine seconds later with a bewildered Huerta still on one knee.

De La Hoya says he will be watching all the fighters on the card closely to assess their development, including lightweight prospect Luis Ramos (13-0, 7 KOs), the talented Santa Ana, Calif., native who will be part of the broadcast. But the fighter-turned-promoter will be paying special attention to Huerta and Ortiz.

“I’m going to be looking at his balance, his timing and his punches,” De La Hoya said of Huerta. “I want to make sure he isn’t hesitating in there. I want to see him throwing back. The guy he’s fighting doesn’t have a great record, but that doesn’t matter. DeLeon is dangerous. He beat the guy who beat Huerta. So this is the process of bringing Charles back. When a fighter loses in the fashion that he did, you have to bring back his confidence little by little. And eventually he’ll get it back. Thursday night will tell us a lot about Charles.”

Thursday night probably won’t tell us much about Ortiz. Alatorre has never been knocked out but the Tulare, Calif., native has lost eight of his last 10 bouts (albeit to solid opposition, including a 10-round split decision to former 130-pound titleholder Carlos Hernandez).

Alatorre, who has a lot of attitude but not much punching power, was selected as an opponent to give Ortiz quality rounds and to keep him sharp for an HBO-televised May 15 bout with former unified lightweight titleholder Nate Campbell.

“I’ll be looking for Victor’s confidence against Alatorre,” De La Hoya said. “I want to make sure there’s no hesitation in him to pull the trigger. I think Fight Night Club is perfect for him to help get his confidence back.”

It’s also the perfect way for L.A.-area fight fans to spend the evening on Thursday.

One of the best shows of the first season of Fight Night Club was headlined by bantamweight contender Abner Mares.

The 2004 Olympian scored an impressive sixth-round KO of Carlos Fulgencio that August evening, giving local fans a glimpse of a future champ while providing the prospects on the undercard a boxing-and-body-punching clinic to emulate.

Mares (19-0, 12 KOs) will return to headline the March 25 Fight Night Club in one last tune-up bout before a Showtime-televised challenge to formidable 118-pound titleholder Yonnhy Perez on May 22.

The formula of having established contenders, such as Ortiz and Mares, headline the series could become a trend this year, according to De La Hoya.

“It’s a special treat we’re giving the Fight Night Club fans bringing in Ortiz and Mares,” De La Hoya said. “Now Sergio Mora, who’s been to the shows as a fan, wants to fight here. I think eventually other ‘name’ fighters will want to headline these cards because of the crowd and the atmosphere and the opportunity to stay sharp between big fights.”

The Feb. 25 edition of Fight Night Club will be streamed live on www.RingTV.com — with a link at Yahoo! Sports — and will be broadcast on Fox Sports Net on a delayed basis (check your local listings). Doors open at 6 p.m. and first bell rings at 7 p.m. (Pacific Time). The first bout (Huerta-DeLeon) of the live (online) broadcast will begin at 8:00 p.m. PT.

Tickets are almost sold out with only General Admission tickets still available for $19.75 (floor standing room and balcony seats) for purchase by calling Ticketmaster at 1-800-745-3000, by ordering online at http://www.ticketmaster.com or through any Ticketmaster outlet or the STAPLES Center box office.

The series, which is presented by Golden Boy Promotions and AEG and is sponsored by DeWalt Tools, Budweiser and Vitamin Water, will return to L.A. LIVE's Club Nokia on March 25, April 22, May 27, June 24, July 29, August 26, September 30 and October 28.