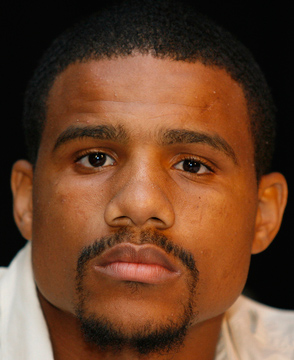 Yuri Foreman: The new junior middleweight titleholder will defend his belt against former junior welterweight and welterweight star Miguel Cotto on June 5 at Yankee Stadium in New York City. This is a very difficult fight for the slick-boxing Israeli even though Cotto is coming off a knockout loss to Manny Pacquiao and fighting at 154 pounds for the first time. The Puerto Rican, a three-time titleholder, remains one of the most-dangerous fighters in the world. Thus, a victory would give Foreman the credibility of a major player that eluded him after he took Daniel Santos’ belt in November. To pull this off, Foreman will have to be at his sharpest and hope that Cotto has slipped (as some believe) or doesn’t adapt well to the new weight class.

Miguel Cotto: Foreman is no pushover, as Santos found out in November. He’s an excellent boxer and his confidence is soaring. Still, Cotto is fortunate to get another title shot against someone he is definitely capable of beating immediately after a brutal setback in his previous fight. Most fighters would’ve had to rebuild at least to some degree. Foreman probably boxes as well as Cotto does but has little power, which makes him a suitable opponent in Cotto’s first foray as a junior middleweight. If Cotto wins, he remains a star with considerable earning power. If he loses, perhaps underscoring the notion that he has declined, he might be finished as an marquee fighter.

Paulie Malignaggi: A deal to fight Amir Khan on May 15 in New York City is all but finalized. I believe Khan is destined to become one of the biggest stars in the sport because of his unusual gifts and the best trainer in the world, Freddie Roach. And I don’t think Malignaggi will beat him. However, this fight might not be the mismatch some believe it is. Malignaggi probably won’t test Khan’s still-questionable chin because he has little power, one reason he was selected as the opponent. The former junior welterweight titleholder is a very good boxer with a lot of experience in big fights, though. He also has found a groove after his horrible setback against Ricky Hatton in 2008. Don’t be shocked if he finds a way to win a decision. An upset would be Malignaggi’s biggest victory.

Malignaggi: The New Yorker’s mouth is one reason he’s a marketable fighter. He usually knows what to say and when to say it. Sometimes he goes too far, though. He publicly accused Manny Pacquiao of taking steroids and then extended his suspicions to anyone connected to Freddie Roach’s Wild Card Boxing Club in Hollywood, Calif. That’s not smart when you’re about to finalize a big matchup against a Wild Card fighter, Khan. Roach is fed up with the comments. “Paulie opens up his mouth and says my fighter is on steroids because he trains with me and Pacquiao. I’m tempted to call Amir and say, ‘Let’s fight someone else,’ and he won’t get the payday. He’s an ass, another drug expert.” Paulie, keep it shut.

Two within three-plus months: Promoter Bob Arum has said for some time that he wanted to stage big fights at gargantuan stadiums. He has followed through this year. Manny Pacquiao faces Joshua Clottey on March 13 at the new Cowboys Stadium in Arlington, Texas. And Foreman will fight Cotto on June 5 at the new Yankee Stadium. These aren’t exactly the mega-matchups one would imagine would pack such large venues. However, Pacquiao is such a hot commodity that he could fight a heavy bag and draw a large crowd. And a Jewish titleholder fighting a Puerto Rican star in New York will definitely stir interest in the nation’s biggest city. These will be two very enjoyable nights of boxing.

Scott Ballan: The young man’s bar mitzvah celebration is scheduled to take place at Yankee Stadium on June 5, the same date stadium officials wanted to host the Foreman-Cotto fight. The Ballan family had reserved the centerfield scoreboard as part of the festivities, which would’ve conflicted with the fight. However, the boy and his family apparently have agreed to forsake that special treat so the fight can take place. In return, the Yankees and promoter Bob Arum apparently have promised him 150 tickets to the fight for his bar mitzvah guests and the opportunity to meet Foreman, who is studying to be a rabbi. Jon Ballan, the boy’s father, is a lawyer who was involved in the financing of the new ballpark. This would be the first fight card at the new facility.

Giovani Segura: Precious few of the tiniest boxers have become significant attractions outside Asia. Segura, THE RING’s No. 1-ranked junior flyweight, has the tools to be an exception. The L.A. area-based Mexican isn’t the most-polished boxer because he got a late start but he has crushing power, which fans love regardless of weight. Segura (23-1-1, 19 knockouts) demonstrated that again on Saturday, when he whacked out Walter Tello in three rounds. And, as his skills improve, he’ll only get better. The key for Segura is whether he can convince talented RING champion Ivan Calderon to fight him for the world championship. If he can — and if he wins — he could be on his way to becoming marketable mighty mite.

Joe Louis statue: An eight-foot bronze statue of Louis will be unveiled Saturday in the late fighter’s native LaFayette, Ala. Joe Louis Barrow Jr., the fighter’s son, reportedly is scheduled to unveil the statue at 2 p.m. CST. It will sit on the west side of the Chambers County Courthouse. Louis was born near LaFayette and spent the first 12 years of his life there. The family then moved to Detroit, which most people recognize as his hometown. “So much is known about Joe Louis growing up in Detroit that many people don't realize he was born and spent the first few years of his life here in LaFayette. We plan to change that with the unveiling of the statue and the surrounding events on this last weekend in February,” James Hardy, a member of the Joe Louis Statue Committee, told the Randolph (Ala.) Leader.

Johnny Tapia’s return: I actually have mixed feelings about the return of one of my favorite fighters, who faces Jorge Reyes on March 6 in San Juan Pueblo, N.M. It will be his first fight since 2007 and second since 2005. First, I should say I’m pleased that Tapia is alive at 43. Some wondered whether the five-time titleholder would meet an early demise because of his reckless lifestyle, Tapia among them. And, second, he obviously loved fighting. So his return to the ring is no great surprise. That said, a 43-year-old man who regularly abused his body isn’t the ideal candidate to test the rigors of this sport. He’ll be OK against Reyes, a journeyman. That might not be the case if he continues to fight.

Manny Pacquiao, asked whether he would be disappointed if he never fought Floyd Mayweather Jr.: “I’m never disappointed. ÔÇª I’ve already proved to the world what I can give in boxing. Everybody knows what I’ve achieved.”