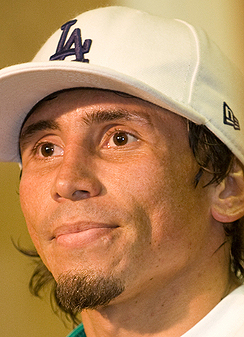 Rios jumped on the 6-footer from New York from the opening bell and never stopped throwing hard, accurate punches until the referee stopped the fight 1:13 into the fourth round of a scheduled 12-round lightweight bout Saturday in McAllen, Texas.

Teron (23-2-1, 15 KOs) fended off the slugger from Oxnard, Calif., reasonably well in the first round but began to take serious, damaging punishment to the head and body in the second and could never regroup. Rios (24-0-1, 18 KOs) continued to land monstrous shots in third and then the fourth – breaking Teron down – before the slaughter was ended.

Teron was a step up in competition for Rios, meaning this was a test for the young prospect. He certainly passed it.

“It’s my best performance,” Rios said. “I trained hard for this fight. I’m ready for the next level. Whoever is at 135, I’m ready for everybody.”