Taylor is not ready to be written off 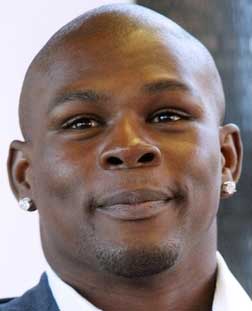 The image of Jermain Taylor on the RingTV.com homepage, called “Bad Intentions,” was painted by Tyler Streeter, an emerging artist who greatly admires the sport of boxing. He began drawing and painting fighters at the age of 10 after watching Marvelous Marvin Hagler fight Sugar Ray Leonard. The chemistry between Tyler Streeter and the “Sweet Science” is evident in his paintings. Reflecting the beautifully sharpened minds and courageous hearts of these modern day warriors, Streeter brings to life the mental anguish and physical stamina unique to boxing. Streeter lives in Las Vegas. You can view his works at www.tylerstreeter.com.

Like most hardcore fans, my attention has turned to the opening round of the Super Six World Boxing Classic after suffering through back-to-back high-profile main events that were painfully one-sided.

Both fights are fascinating style matchups. Fans and media are split on whether Dirrell’s speed and athleticism can overcome the physically imposing Englishman’s relentless pressure.

However, I’m more interested in Abraham-Taylor, which might come as a surprise to some since that matchup is perceived to be one of the least competitive bouts that have been scheduled thus far in the tournament.

I’ve stated this before but allow me to do so once more on record, Abraham (30-0, 24 knockouts) is my favorite to win the tournament. I think the powerful Armenian is the total package — skill, technique, physical tools, experience and guts with a capital “G.”

I think the former undisputed middleweight champ is Abraham’s toughest assignment in the tournament and perhaps his six-year career. And if the version of Taylor shows up that I believe will, I think fans are going to be treated to one hell of a fight.

Abraham and Taylor are strong, aggressive boxers with excellent hand speed and considerable power. What makes both special is their ability to explode offensively at any time, from any angle, during their fights, often with spectacular results.

We saw Abraham do this in his first foray into the super middleweight division last June, when he traveled to Florida for his rematch with Edison Miranda, the Colombian bomber who had broken his jaw in the toughest fight of his career two years earlier.

For three rounds, Abraham took his time, as he often does, sticking, moving and defending, until the right moment to suddenly shift gears appeared in the fourth round. Abraham lashed out with left hook-right cross combinations that dropped Miranda three times and left the shocked KO artist in a heap.

We saw similar explosiveness with Taylor during his first fight with Kelly Pavlik, when he decked and repeatedly rocked the then-undefeated challenger in the second round of their middleweight clash and almost had him out.

We saw it again in his last fight, a memorable tussle with Froch in April. Taylor dropped the iron-chinned beltholder in the third round and then badly wobbled the Englishman at the end of the eighth round.

The difference between their explosive moments is that Abraham got the job done, which is why he’s undefeated and favored to beat Taylor, who many fans believe shouldn’t be in the tournament.

Taylor knows what’s being said and written about him and he says he understands the skepticism.

Taylor believes if he had the energy to defend himself in the final 30 seconds of his battle with Froch, a fight he was winning on two of the scorecards going into the final round, he would have won the decision and nobody would question his inclusion in Showtime’s tournament.

But Taylor didn’t have the energy to fight back during Froch’s furious final round rally. Completely out of gas, the listless former champ was pushed around the ring until Froch dropped him with less than a minute to go in the fight. Taylor got up on wobbly legs with 29 seconds left in the round but could not defend himself and the dramatic fight was halted at 2:46 of the 12th round.

“I was 14 seconds away from winning the super middleweight title,” Taylor said. “If I didn’t gas out in that fight, I think I would be the favorite in this tournament instead of the guy that everybody’s writing off.

So instead of retiring, as many fans and more than a few members of the media have suggested, Taylor decided to give himself one more chance to prove that he belongs with the elite fighters of his division.

He agreed to participate in Showtime’s Super Six and then he had one of the most extensive camps of his pro career, starting with a four-week pre-camp in his hometown of Little Rock, Ark., that focused on getting his weight down and strengthening his legs.

The next step was a 10-week camp at George Foreman’s youth center in Houston that got him in tip-top boxing shape through quality sparring and a new road-work system.

The third leg takes place in Berlin, which he leaves for next week, and where he will taper down and fine tune his strategy to beat Arthur.

“This is the best camp we’ve ever had,” said Taylor’s trainer, Ozell Nelson. “It started at home (in Little Rock), where we made sure Jermain followed a proper diet and lost weight gradually before we started our real camp in Houston.”

Taylor says starting camp less than 10 pounds over his fighting weight has enabled him to focus more on his preparation than the scale.

“Houston was just a boxing training camp, not a camp to lose weight,” he said. “I wasn’t sparring to lose weight or running to lose weight like I have been for the last few years. I used to expend so much energy just making weight in camp that I was drained by the time it was time to fight.

Taylor says he won’t be concerned about his stamina if he hurts Abraham; he’ll try to close the show.

“I’m looking forward to this fight because the ‘Bad Intentions’ is going to come out again in Jermain,” Nelson said. “He’s going to know that he can throw 100 punches a round if he needs to. He knows he can do it because he’s been doing it in sparring. He’s been kicking butt and his back hasn’t touched the ropes yet.

“If Jermain gets Abraham down, he’s going to keep him down.”

Taylor won’t predict a KO victory, but he’s confident of his ability and conditioning going into what might be the most important fight of his career if he wishes to continue it.

“I know if I’m in shape, I can beat anybody in the 168-pound division,” he said. “If I didn’t believe that, I wouldn’t be in this tournament. I’m not taking anything away from Abraham. He’s a hell of a fighter. His defense is great. He has power. He’s a smart boxer who knows how to fight when he wants to fight. But at the same time, he’s no Bernard Hopkins. I can’t put him that category, and until he whips me, I can’t put him on the same level as me.

“I won’t put any of the fighters (in the tournament) on my level because I’m not ready to be written off.”

Doug Fischer's column appears every Thursday. He can be reached at [email protected]