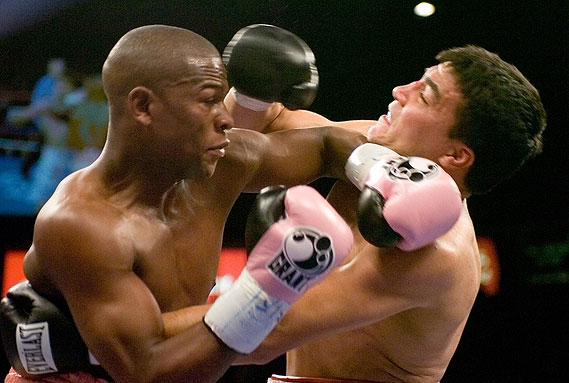 In many circles, maybe yours, today’s welterweight division is being spoken of as another “Golden Era” at 147. There have been so many of those at this weight you could be forgiven for wondering what the hell it is with guys who weigh around 147 pounds, but that’s a question for another day.

Look at the guys currently campaigning at or around 147 pounds. Shane Mosley, Floyd Mayweather Jr. and Manny Pacquiao are all locks for the Hall of Fame. Miguel Cotto is one of the best in the world. Antonio Margarito, loaded wraps or not, is hell in short pants.

Paul Williams, despite having the dimensions of Ernie Terrell, says he still can get to 147 for the right fight, and he’s probably right. There’s no one in the game tougher than Joshua Clottey, and Andre Berto and Luis Collazo are top-flight pros.

This is as formidable a class as there is in the business. But how does it compare with the last great era that included Oscar De La Hoya, Mosley, Felix Trinidad, an aged Pernell Whitaker, and Ike Quartey?

Or, for that matter, the one that featured Ray Leonard, Thomas Hearns, Roberto Duran and Wilfred Benitez?

“The word ‘Golden Era’ conjures up thoughts of greatness and I throw around the word great as if it were a manhole cover,” historian and Hall of Fame promoter J Russell Peltz told RingTV.com.

“Pernell Whitaker was a great fighter, in my opinion. Pernell fought and beat the best — including (Julio Cesar) Chavez — in their primes and he did it consistently for years and years.

“People question Pacquaio's fights with (Juan Manuel) Marquez and they question why Floyd hasn't fought Mosley or Cotto or Margarito. Mosley shows signs but lost twice to (Vernon) Forrest and recently to Cotto. Not that losing any fight disqualifies you, but check out Pernell's s record, in his prime, and you can see what I mean. Even past his prime some question the decision he dropped to Oscar. And he was a ghost of himself by the time he fought Trinidad.”

Peltz is right about Whitaker, who never hesitated to fight the best in his division. This is in sharp contrast to Mayweather, who last beat a natural welterweight in 2006, when he outpointed Carlos Baldomir. His next scheduled fight is against Marquez, a featherweight for most of his career.

But the rest of the top guys in the division — Mosley, Cotto, and Pacquiao especially — have never ducked anyone. And Cotto and Pacquiao have become big attractions with legions of followers. Can’t they compete with previous eras?

“I think the welterweight division is the best out there right now and has the best possibilities for big fights and the best pairings,” said HBO’s Larry Merchant, who was just inducted into the International Boxing Hall of Fame. “For the present and the near future it looks like the most crowd pleasing in boxing.

“There’s not anyone comparable in terms of popularity to De La Hoya and Trinidad or to the guys in the Leonard-Hearns era. They were just hugely popular fighters with big followings that generated huge revenues. The test will be Cotto-Pacquiao, with the winner presumably meeting Mayweather or Mosley.”

Even with those mega fights on the horizon, it’s hard to compete against history. Clearly today’s welterweights face an up-hill battle.

“Talent-wise Leonard and Hearns were on the highest level,” Merchant said. “They were in a different class in terms of their talent and popularity. And Quartey was a very good fighter, and Oscar and Trinidad had tremendous fan bases.”

“It remains to be seen whether the potential matchups in this class can come close to that. Pacquiao-Mayweather would be huge. Cotto and Pacquiao would be big. But until this class is over we won’t know. We’ll see how it plays itself out.”

There also are doubts about the fighters in today’s group that did not apply to the previous eras. But to be fair, there were doubts then too. Details are lost to the passage of time.

“Margarito's career is in doubt due to the hand wrap situation. He could join Mark McGwire, Sosa, Bonds, et al, in purgatory,” said Peltz. “It’s way too early to judge Berto. His level of opposition is only now beginning to rise. He may be the real thing, but it's too early. Clottey is tough and durable, but as of now the best thing you can say about him is that he gives the top guys good, hard, close fights — but he loses.”

“Have there been enough fights among the group to compare it to the De La Hoya, Trinidad crew? Is this another case of rushing to judgment? Let's wait another year and see how this plays out. Will Cotto give Mosley a rematch? Will Mosley fight Pacquiao? Mayweather?”

So maybe it isn’t another Golden Era — not yet, anyway. It’ll be fun watching them try to make it one.

Peltz’s welterweight prospect Mike Jones meets Larry Mosley, finally, on Aug. 8 in Atlantic City, N.J. By the way, if Jones looks familiar, you must be one of the 17 boxing addicts who bought a copy of BOX LIKE THE PROS, the book Joe Frazier and I wrote a couple years back. Jones, who used to fight out of Frazier’s gym in Philadelphia, is prominently featured. ÔÇª

Congratulations to Paul Spadafora on winning his first fight with new trainer Pernell Whitaker. Here’s the danger: If these two ever decide to go out together to celebrate, we won’t see them again for six months. ÔÇª

Is it me or does Jorge Arce look more like a cartoon rodent with every appearance? ÔÇª

In an effort to get Chris Arreola some momentum, Goossen Tutor is holding a press luncheon this Tuesday at a joint in Sherman Oaks, Calif., called Sisley Italian Kitchen. OK: A gaggle of double-chinned, freeloading fight writers. And Chris Arreola. In an Italian restaurant. At the same time. This has riot police written all over it. ÔÇª

On the other hand, it’ll be fun watching Mohamad Abdulaev, already one fight into his own comeback, bleed all over the canvas again. ÔÇª

In response to last week’s column recalling the Larry Holmes-Mike Weaver fight, several readers emailed asking where I place Holmes among all heavyweight champs. Lower Top 10. Why not higher? Any fight against a higher-quality opponent, Holmes won, but struggled.

Earnie Shavers and Renaldo Snipes almost knocked him out. Weaver was life and death. Gerry Cooney hurt him. Later, Tim Witherspoon and Carl Williams gave him hell. The only guys Holmes really dominated were the dregs — Alfredo Evangelista, Randy Cobb, Scott Frank, et al. The greatest fighters every once in a while make it look easy against other top-level fighters. Holmes never did. Same thing with the heavyweight Evan Fields, er, Evander Holyfield. ÔÇª

There’s only one person happier than you that Vitali Klitschko doesn’t have to fight Oleg Maskaev, and that’s Oleg Maskaev. ÔÇª

There are rumors now that Klitschko will fight Nikolai Valuev. Great. That’ll look like a scene from the original “Clash of the Titans.” They should get Harry Hamlin to referee. ÔÇª

Mosley’s groveling for a fight with Pacquiao is getting a little embarrassing. Hey Shane — since you’re feeling so brave these days, we hear Forrest’s dance card is pretty empty. How about it? Seriously, this reminds me of when Terry Norris was calling out Julio Cesar Chavez. ÔÇª

As much as I’d like to see Berto face the very top guys at 147, it’s hard not to be happy that it looks like he and Collazo will get together again. It was a wonderful fight the first time, and Collazo deserves another shot. ÔÇª

Have I mentioned how much I like Timothy Bradley-Nate Campbell?