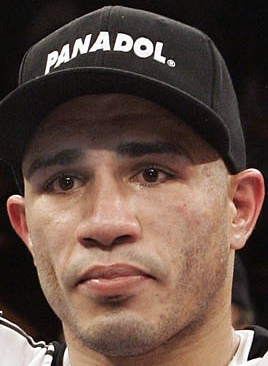 Miguel Cotto lets his fans know that he got the job done against Michael Jennings on Saturday night in New York. Photo / Ray Bailey-hoganphotos.com

Miguel Cotto: Cotto showed no ill effects from the beating he took from Antonio Margarito, confidently and methodically stalking Michael Jennings before stopping him in five rounds Saturday. Jennings, apparently overwhelmed, wasn’t a great test but Cotto looked as good as can be expected.

Kelly Pavlik: THE RING middleweight champion couldn’t look spectacular against a reluctant opponent like Marco Antonio on Saturday in the titleholder’s hometown of Youngstown, Ohio. And a knockout would’ve been nice. However, the devoted crowd approved of the one-sided victory and Pavlik got back to winning.

Marco Antonio Rubio: Not many people believed he would beat Pavlik but he was expected to put up a fight, which he failed to do. The seasoned Mexican said afterward that he felt tight but, more likely, he felt Pavlik’s power and decided it was wise merely to survive as long as possible. The result was a boring fight.

Humberto Toledo: The tough Ecuadoran used dirty tactics throughout his fight with Breidis Prescott on Friday but then went too far, biting Prescott on the shoulder in an apparent fit of frustration and getting disqualified. He should receive a suspension as long as Antonio Margarito’s.

Prescott: The conqueror of Amir Khan is known as a big puncher. However, he proved how tough he was against crafty, dirty-fighting Toledo and showed off his considerable boxing skills. He has some flaws defensively but has a lot of impressive tools, which could carry him to great things in this sport.

Luis Yanez: The 2008 U.S. Olympian opened his professional career with a majority-decision victory over Julio Valadez in a four-round bantamweight fight on Saturday in Dallas. Two judges scored it for Yanez and one had it even. Yanez is best known for being removed from the U.S. team for missing three weeks of training camp and then being reinstated. He lost in the second round of the Olympic competition.

Matt Korobov: The former Olympian from Russia could rival the feat of Leon Spinks, who fought Muhammad Ali for the heavyweight championship in only his eighth pro fight – and won. Korobov is 4-0 (with four KOs) after stopping Cory Jones in a middleweight fight on Saturday. We’ll see how quickly promoter Bob Arum moves the 26 year old.

Kina Malpartida: The Peruvian woman knocked out previously unbeaten Maureen Shea in the 10th round of a junior lightweight fight Saturday in New York. OK, I confess: I had never heard of either one them. Sounds dramatic, though.

Oscar De La Hoya: “That’s where I thought, ‘Go ahead (Manny) and land something strong and hard right on the button so you can knock me out and take me out of my misery.’ That’s how I felt at the moment,” said De La Hoya, referring to the seventh round of his one-sided loss to Manny Pacquiao on Dec. 6.