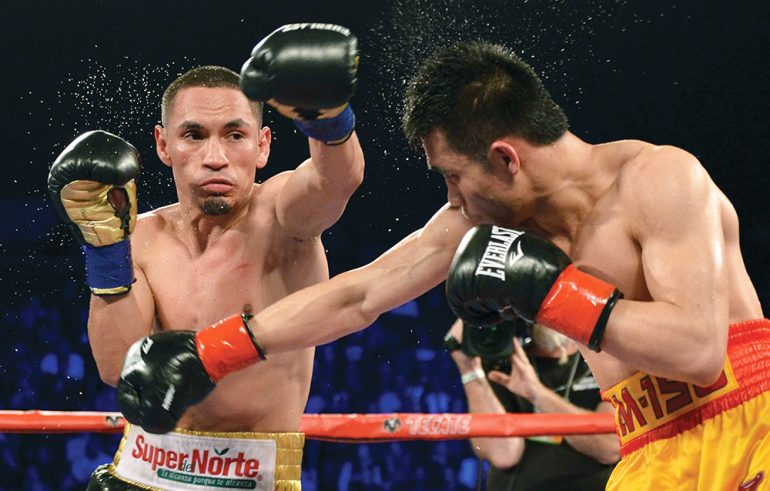 WHAT IT LOOKED LIKE: In March 2017, Roman “Chocolatito” Gonzalez was the No. 1 pound-for-pound fighter in the world when he stepped into the ring to face Srisaket Sor Rungvisai for the first time. Gonzalez’s reign ended that night amid copious gouts of blood and criticism, the latter intentionally sprayed on the judges, but his knockout loss in the rematch was as undebatable as it gets. Then the caveats erupted: Gonzalez was in a division too high, he was too old, the wars had caught up with him … people focused on what he’d been before Sor Rungvisai – who was just a former garbage-collector from Thailand, after all – wound up in the right place at the right time. As such, the truth-machine-by-proxy became the last guy to have some success against a prime Gonzalez – and that would be Juan Francisco Estrada. 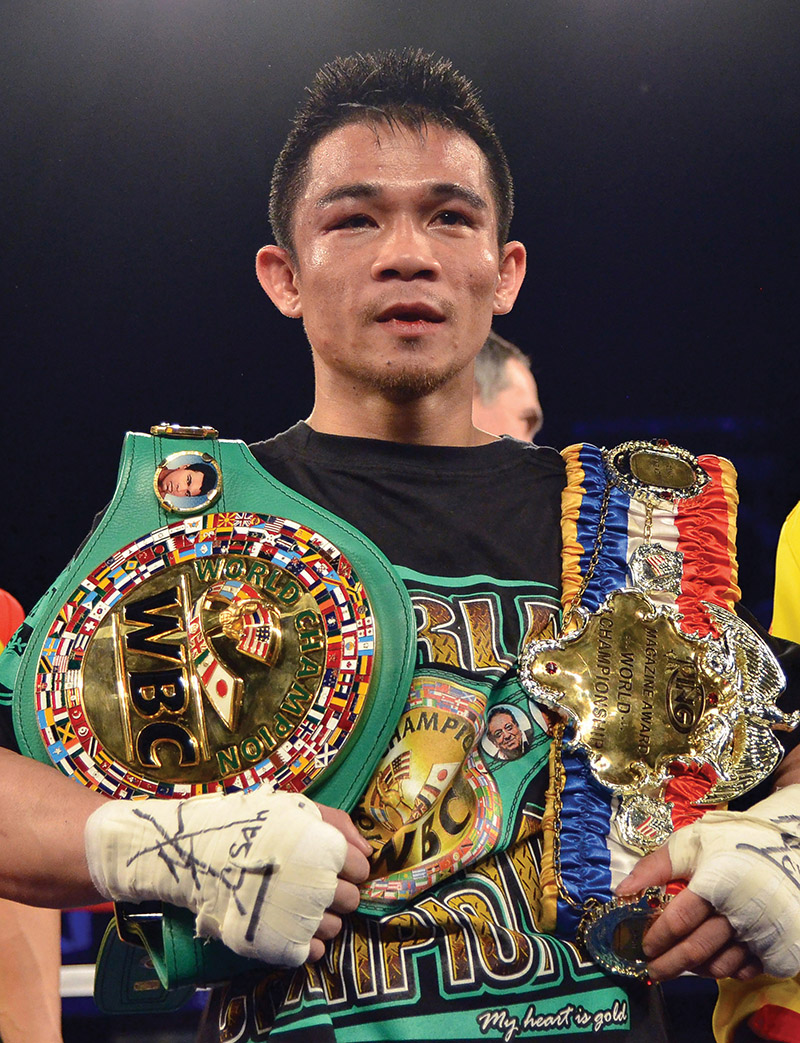 Estrada didn’t beat Gonzalez when they met back in 2012 to fight for a junior flyweight title – he lost a competitive but clear decision – but he troubled Chocolatito enough, and his record since then had been so strong that some believed he was just one Sor Rungvisai date away from his own pound-for-pound berth – not to mention the RING junior bantamweight championship.

When the bell rang for the headliner of HBO’s “Superfly 2” event, however, it looked like it would be Chocolatito all over again. Estrada was the better boxer, clearly, just like Gonzalez had been. And just like a year earlier, the skill-gap was irrelevant because Sor Rungvisai quickly deduced that he had nothing to fear from the gloves skillfully caressing his face. The obvious power behind his own punches, meanwhile, gave every one of Estrada’s attempts to get inside the cringey inevitability of a slasher-film teen wandering alone into a forest.

And then the axe never came. It turned into a hell of a fight instead, with the threat of Sor Rungvisai’s jab-free avalanche countered by Estrada’s less plentiful but more accurate combinations. In the 12th round the ultimate twist even seemed possible as Sor Rungvisai appeared to stagger under the hail of Estrada’s power punches – nearly double the amount he’d thrown in any previous round. Luckily, 15-round fights were abolished shortly after Sor Rungvisai was born.

WHAT IT MEANS: The cult of Srisaket is for real, the fairy tale continues. This fight was close, but not so much that people complained about the winner. A rematch is possible, and Sor Rungvisai, who is not one to dodge post-fight questions with talk about his brand, said he’d be happy to oblige. The name on most wish lists is the fellow pound-for-pounder who has announced his intent to move three pounds north, Naoya Inoue, and looking at Sor Rungvisai’s rehydration weight and his power, it seems like he could easily hang at bantamweight also. Another hidden-in-plain-site gem at 118 is the No. 1-rated Zolani Tete, who could be harboring his own greatness. 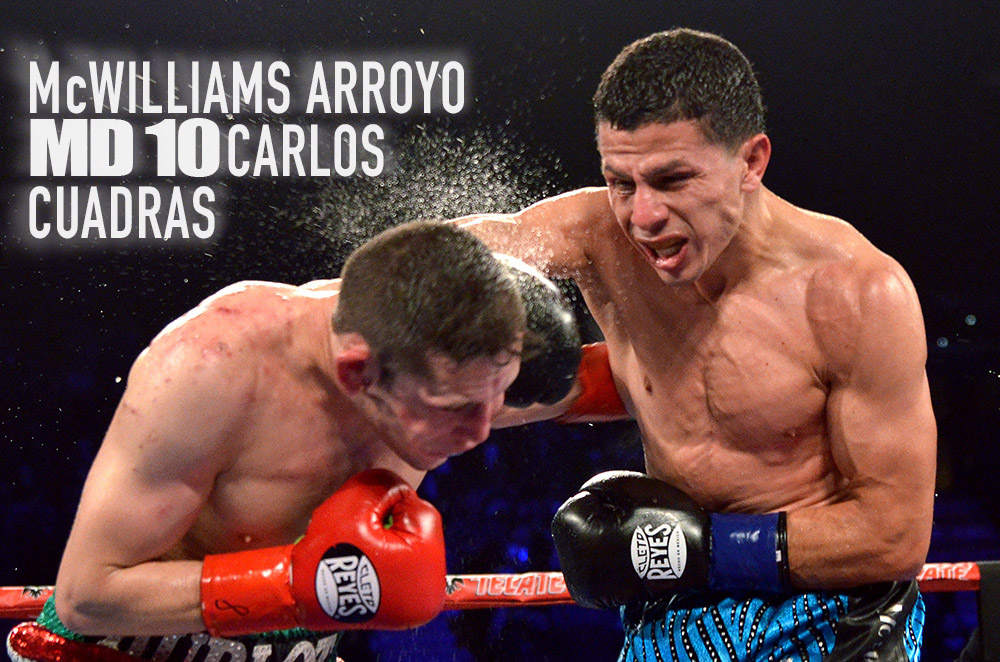 Cuadras knew how to work the cameras, but Arroyo knew how to work the body. Guess which talent mattered most. Not being favored to win was understandable considering his near-two-year layoff, but Arroyo attacked Cuadras’ liver like it was personally responsible for the insult. Same as in Sor Rungvisai-Estrada, though, the guy getting outboxed had the power to make every exchange dangerous for the twin from Puerto Rico.

Both fighters were getting buzzed, but Arroyo was winning the heated exchanges with punches almost as varied as his vocalizations – some resembled the “woop woop!” of a police car rolling up behind a perp – while Cuadras resorted mostly to swinging for a one-punch knockout. When the final bell rang, the once-beaming Mexican was suffering from the effects of abdominal abuse while Arroyo’s smile revealed his own gut feeling, which was correct: scorecards of 98-92 and 97-93 in his favor and the third at 95 apiece. Sor Rungvisai, Estrada or a Cuadras rematch – the appetite for Superfly 3 is strong – could be in Arroyo’s future. 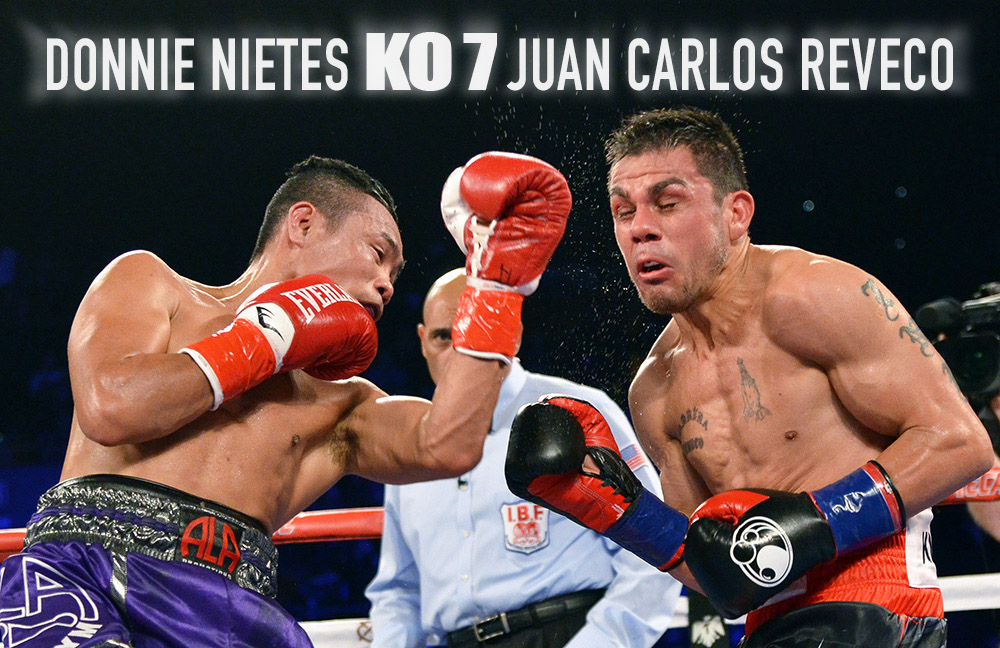 “Best-kept secret” is a phrase often used to describe Nietes, and a funny one given his belts in three divisions and the fact that he is the Philippines’ longest-reigning titleholder ever. Nevertheless, Nietes is one of boxing’s best-kept secrets, and the 35-year-old’s methodical skill-level is testament. His jab-and-abide approach held Reveco to a connect rate of just 13 percent and may have frustrated the former titleholder from Argentina (and the crowd) into thinking they’d have to endure the equivalent of a 12-round lecture on boxing fundamentals.

Then, at the end of Round 6, Nietes unfurled another facet of his game in the shape of a vicious right hand that left his opponent stumbling back to his corner. Reveco was on the canvas not far into the seventh, and a follow-up salvo of bodyshots from Nietes summoned the all-powerful towel. Nietes, who was fighting at 112 having already won titles at 105 and 108, said afterward that he’d happily face any of the 115-pounders (specifically the winners) battling at The Forum that night. 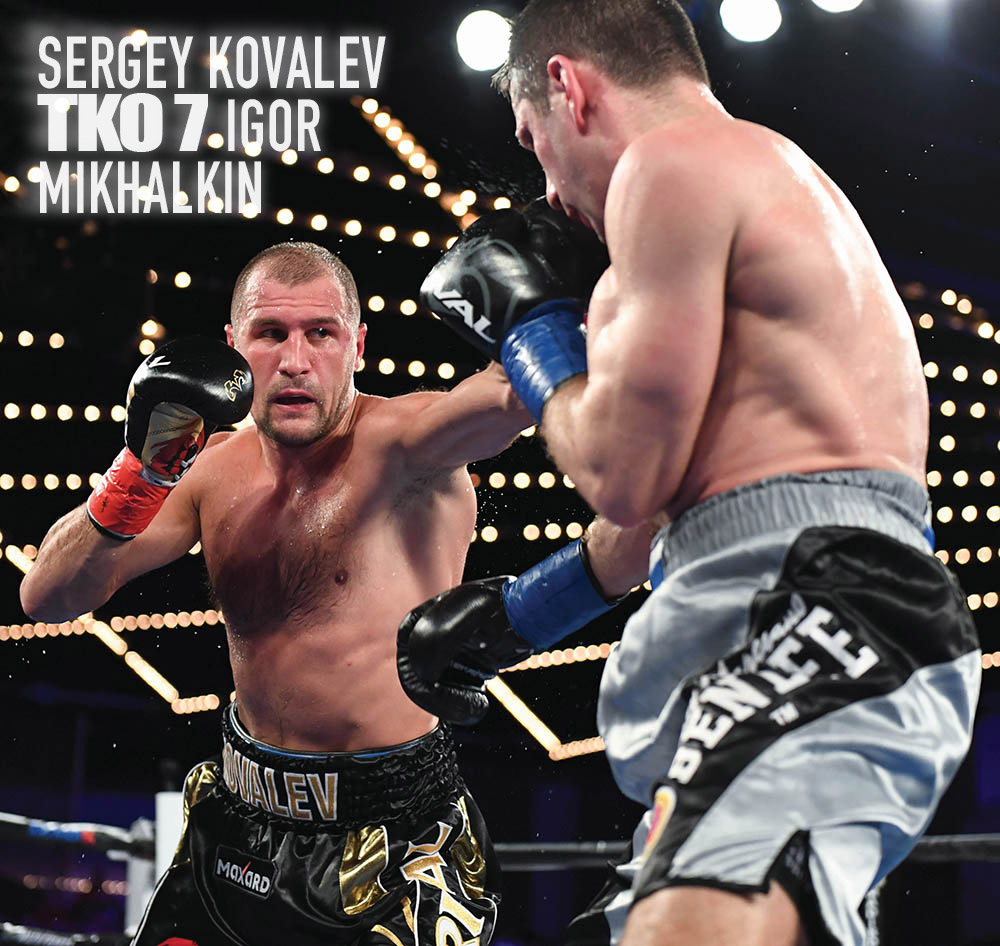 Kovalev was once touted as boxing’s next Terminator, but a pair of losses to Andre Ward and some extracurricular racism may have hurt his career a bit. This was the second step of his rebuilding process, and if the arena dead enough to hear a baby crying on the HBO broadcast was any indication, there is still work to do in reconnecting with fans.

Kovalev did his job, though, successfully defending his WBO light heavyweight title by dominating the hardworking Mikhalkin (an old friend from the amateur days) with accurate, cut-producing punches. It was never a question of who would win, but as the fight went rounds and Kovalev was getting caught a bit more than expected, the question became less “when” and more “why not yet?” Kovalev said in his post-fight interview that he just has trouble with southpaws and mentioned right-handed Badou Jack as a favored target. 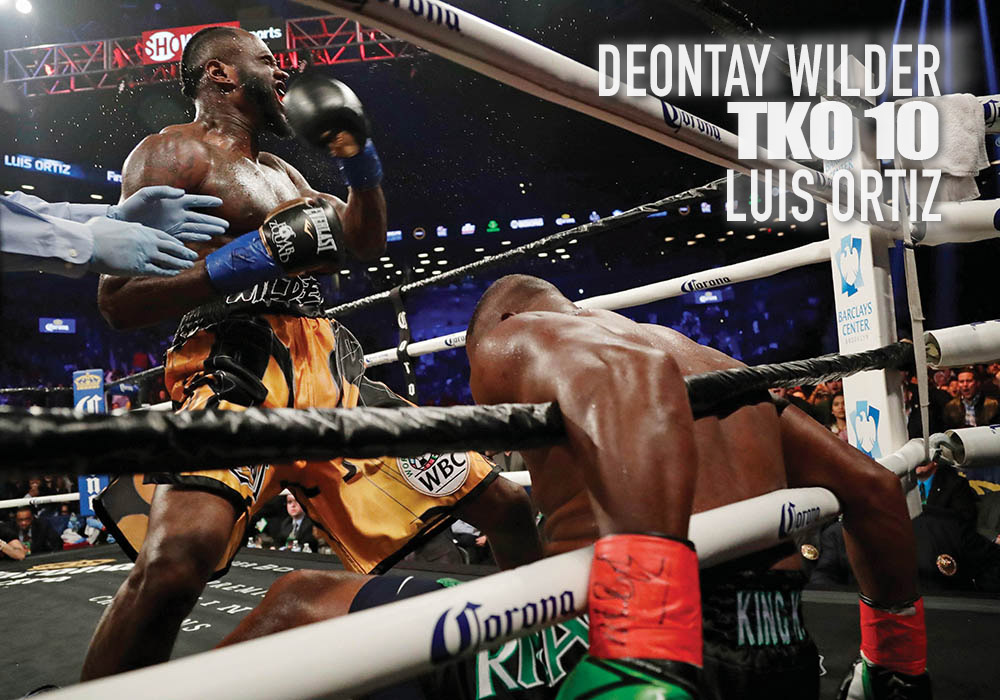 The sentimental yearning for a heavyweight unification superfight is so palpable that conspiracy theorists were claiming that Wilder-Ortiz was just a fix to get the American knockout artist into the ring with British star Anthony Joshua. If the first knockdown of the fight – Ortiz down in Round 5 – had come any earlier in the round, the idea might’ve gained traction, as the matchup did have the feel of killing time up to that point. If Ortiz’s payback – he practically had Wilder out on his feet in Round 7 – had come a bit earlier, the ending could’ve been truly shocking. But in both cases the fighters were saved by the bell, and the ending we got instead was the Goldilocks zone of a competitive contest with a legit if unspectacular knockout in Round 10.

As has become the usual narrative with Wilder, this fight was all about the right hand, but his seventh-round scare also brought up another frequently discussed part of his anatomy: his chin. Ortiz caught him good and Wilder was barely hanging on, no doubt. But he did hang on for 30 seconds of heavy-handed mayhem. Does this mean that his chin is weak, as many have suspected, or does it mean that Ortiz punches like a mofo and Wilder proved his whiskers by remaining conscious? It’s similar to the talk around Joshua following his survive-and-stop win over Wladimir Klitschko. So it’ll definitely be interesting if the twain should meet. As we went to press, Joshua had yet to do his part against Joseph Parker on March 31. 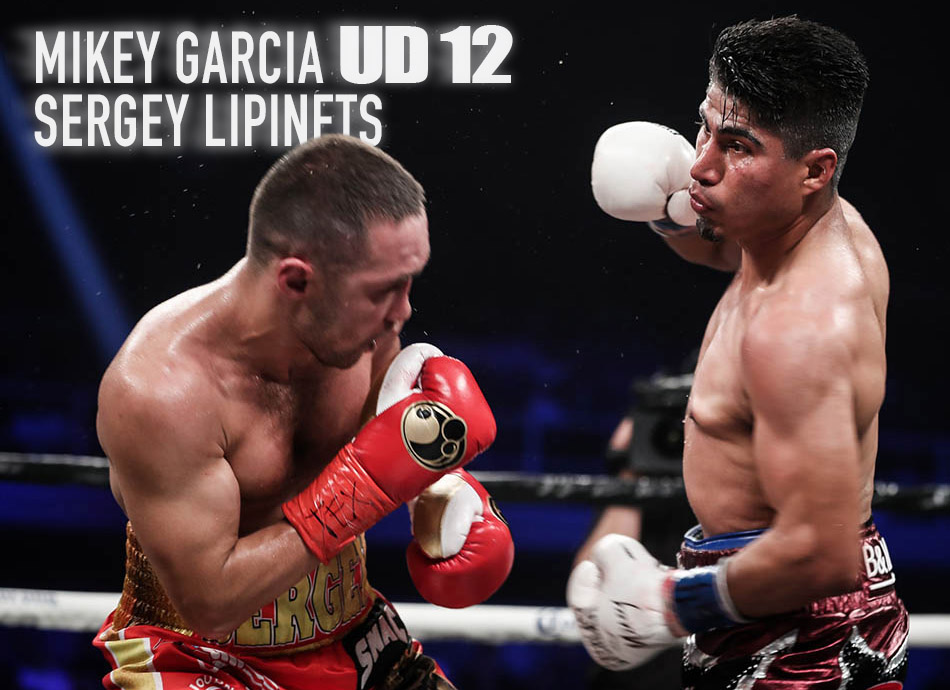 Like every fighter on the pound-for-pound list, Mikey Garcia goes into each fight with a lot of scrutiny on his performance. He delivered again, this time in winning a title at junior welterweight (his fourth division, if you’re counting), but it wasn’t easy. Garcia’s concentration is cold-blooded and his one-two is like a pair of vipers, but Lipinets took it all well and delivered his own clean punches behind effective pressure. A counter left hook in Round 7 put the Kazakhstani down for the first time in his career, but overall the performance left questions about how far up the scale Garcia’s power could travel. It wasn’t a concern after the fight for the Californian, who instead focused on the options he has, given that he still holds a title at 135 and sees himself able to handle 147 as well. 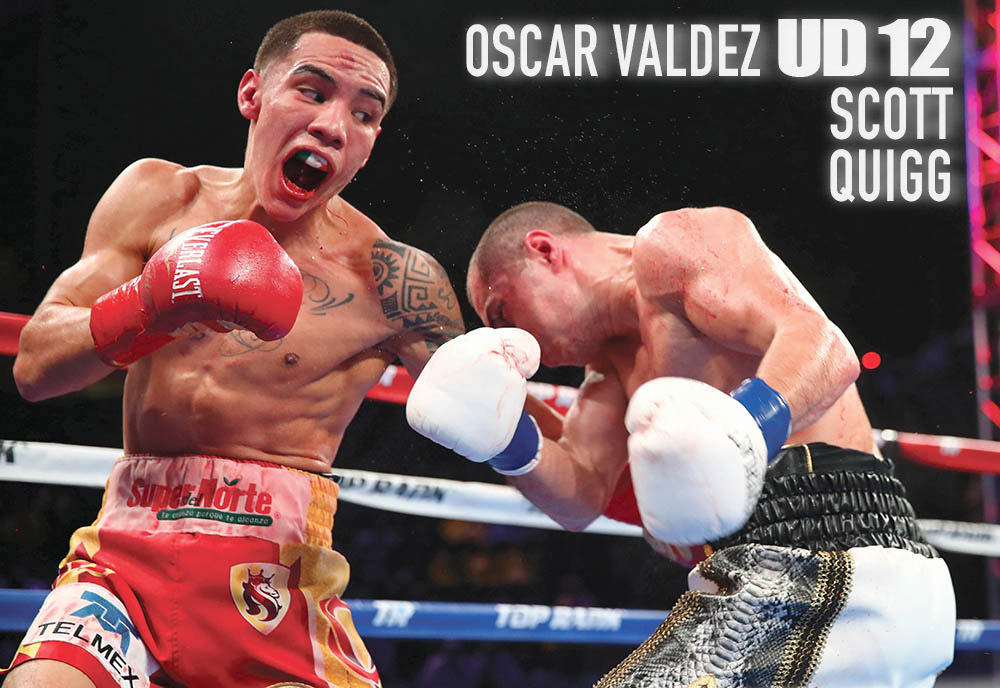 This fight was like a 12-round art-house film. It began with the surreal image of rain soaking the outdoor arena as the fighters were carried to the ring under shielding tarps with plastic bags over their shoes, like recycled nobility. The downpour was merely foreshadowing, a motif that would continue with blood dousing the canvas. Water breaking to blood flowing. Birth to death? Boxing as a metaphor for life? Genius!

Whatever. Awesome, dramatic fight, though. Valdez came out with a stony face and a merciless body-attack, but by the fourth round his jaw was broken and the bleeding had commenced. Quigg (who weighed three pounds over and was therefore ineligible to win Valdez’s WBO featherweight title), his eyebrow cut and his profile streamlined by a broken nose, dove in head-first. The exchanges were fast and brutal with both fighters landing clean shots, but one man simply did more and the scorecards told the tale: 118-110, 117-111 and 117-111 for Valdez. 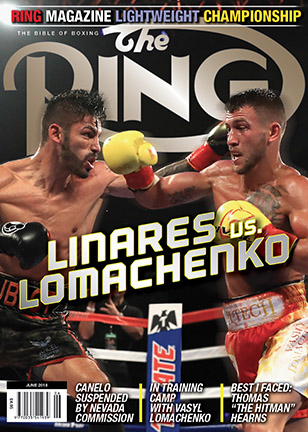 There was the will, and now Linares-Lomachenko is the way

Lomachenko is after more than just shiny belts

The WBSS brackets have done their job ... now bring on the finals

His opponent in doubt, Golovkin continued to train for May 5

Letter from the Publisher

Millions of reasons to celebrate

Fighter of the Month and Advanced Degrees

Philly cranks out another man to be reckoned with

Greatest hits from The Hitman himself

If a genie gave you three wishes, this would be one of them

The cult of Srisaket grows stronger

Movers and shakers in the RING ratings

Because boxing is a global sport!

A longer night than Duran expected