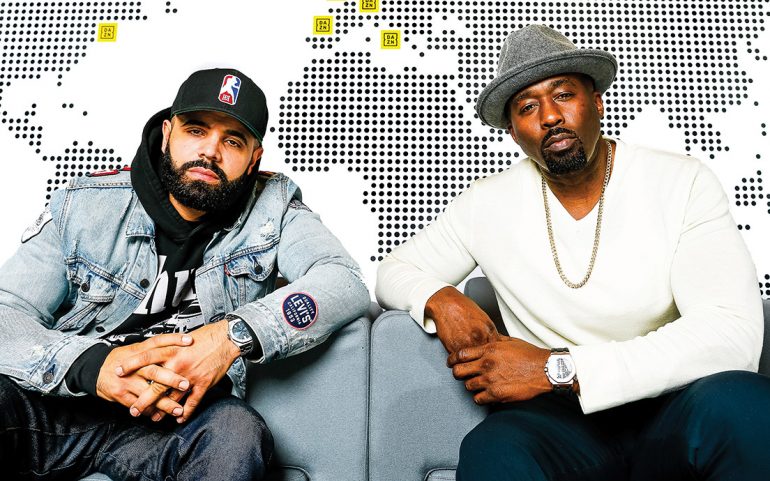 Rakim once said, “It ain’t where you from, it’s where you at.”

The legendary rapper’s words resonate with Akin “Ak” Reyes and Kamal Barak Bess, radio personalities who hardcore boxing fans simply know as Ak and Barak. Within just a few years, the Brooklyn natives have become two of the more prominent and influential members of the boxing media as co-hosts to “The Ak and Barak Show” on SiriusXM Radio Fight Nation (Ch. 156).

When away from the radio studio, Ak and Barak express their talents on camera with “The Sweet Scientists” and “Da Pull Up,” popular programs streamed on DAZN.

How did they go from relative unknowns in the boxing business to hosting a daily radio show and two TV programs? It started with friendship and a mutual obsession for hip-hop and boxing.

Ak and Barak first crossed paths on a basketball court in Park Slope (Brooklyn) 25 years ago, and it was obvious that they had much more in common than just partaking in casual pick-up games at the park. They were passionate fans of hip-hop, fashion and boxing, and they enjoyed engaging others in their heated debates on the sweet science.

In the early 1990s, word of mouth was society’s version of social media. In the hood, Ak and Barak were commonly known to initiate discussions and debates with fellow fight fans at frequented neighborhood landmarks, such as barbershops and the bodega. Ak was the first to use his gift for gab behind a mic.

“About 10 years ago, I started hosting a hip-hop radio show on a small internet station for free,” Ak recalled. “It was a weekly show, and with that platform, I started to talk about boxing with my co-host, Saleem ‘Hitchcock’ Thomas. This would eventually open the doors for us in the world of boxing journalism. I then started to do work for WorldStarHipHop.com. We sent them videos and interviews that we conducted with fighters. This ultimately created bigger opportunities from a professional standpoint as well.”

In 2015, Ak and Barak were offered a show called “The Hype Men” on the SiriusXM Rush channel (which focuses on combat sports). In what would be the duo’s first national radio platform, their job description included pre- and post-fight coverage at some of the biggest boxing events around the country. Ak and Barak also addressed the hottest topics in pop culture.

By the fall of 2016, while still employed at SiriusXM Radio, Ak and Barak were hired by Thisis50.com, the website/video platform owned by music mogul and actor Curtis “50 Cent” Jackson. Their show “The Sweet Scientists” was born.

On it, Ak and Barak both review and discuss everything that is happening in the world of boxing. They also engage in two-on-one interviews with some of the biggest names in the sport. Two years after its inception, “The Sweet Scientists” was picked up by DAZN, a smart move by the new streaming platform given the wide appeal of the show as well as a bold advance for Ak and Barak, but it was also a risky move for the co-hosts given the fractured nature of the boxing industry. 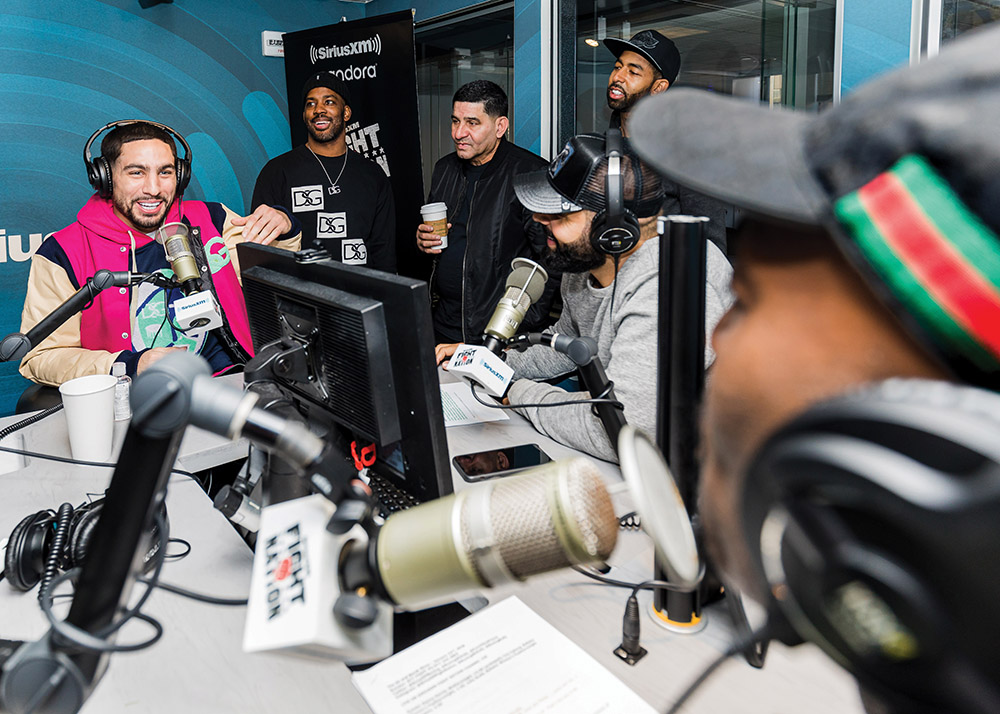 Danny Garcia enjoys himself in the studio with Ak and Barak.

DAZN made its U.S. debut with an exclusive multi-year deal with British promoter Eddie Hearn, who manages unified heavyweight titleholder Anthony Joshua and a large international stable of fighters. In late 2018, DAZN signed Canelo Alvarez to a record-breaking exclusive contract and did a multi-year deal with the Mexican star’s promoter, Golden Boy. Former middleweight champ Gennadiy Golovkin would also join DAZN in early 2019.

All essential moves by DAZN, but the often adversarial nature of boxing threatened to keep the stars of other promotional companies and networks off of “The Sweet Scientists” now that it was part of the upstart streaming platform’s programming. Ak and Barak would not accept the political divide.

“Barak and myself, through our relationships with fighters, promoters and publicists, have torn down the wall that once existed between DAZN and everyone else, including ESPN and Al Haymon – particularly Al Haymon fighters,” said Ak. “It was taboo for anybody to be on DAZN. Everybody wanted to stay away from it, but we kept chopping and chopping and chopping away through relationships – like (Barak) with (Shawn) Porter, me with other fighters on PBC and Top Rank – until we got (Vasiliy) Lomachenko on. He was the first Top Rank guy on our show. We have also had the likes of Tyson Fury, Danny Garcia, Gary Russell Jr. and Shakur Stevenson as guests on the show as well.”

Ak and Barak have not only torn down the walls between rival boxing promoters and networks, they’ve also built a bridge between DAZN and SiriusXM.

“Although the paperwork may reflect that our arrangement is strictly a deal with DAZN, we are still working under the auspices of SiriusXM Radio,” Barak said. “Initially it wasn’t easy. However, both entities eventually were on the same accord when they happily reached an agreement. But there was so much more to this iconic merger between SiriusXM Radio. This partnership is truly one of a kind. SiriusXM Radio and DAZN took a chance on Ak and Barak because they knew that we were the only ones that could carry a daily show of this magnitude. Ak and Barak incorporate both culture and lifestyle.”

Ak and Barak’s fashion sense combined with their ability to engage boxers and entertainers in truthful and sincere dialogue is what separates them from other on-camera talents and print journalists. The studio ambiance of “The Sweet Scientists” often has guests feeling that they are at a family member’s cookout. How else can you explain the wrestling match that took place between Terence Crawford and Ak at the studio?

“Da Pull Up” is a stark contrast to the conventional Q&A session. In a Candid Camera-type of prank, Ak and Barak target an internet troll who has disrespected a fighter and then pull up with that fighter in tow to startle the troll in a public setting.

“Da Pull Up” is distinct in the sense that it’s real people and not actors. The show has been very successful and has since gone viral.

With the launching of “The Ak and Barak Show,” which debuted on SiriusXM in November and airs weekdays from noon-3:00 p.m. ET, boxing fans are presented with the option of listening over the airwaves or watching the simulcast on DAZN at a later time. This formula is reminiscent of the Howard Stern blueprint, which was perfectly executed when the “shock jock” worked at 92.3 FM. Stern’s morning radio show was filmed and then televised later on the E! channel. Ak and Barak could reach a wider audience by following the model.

These ‘microphone fiends’  have come a long way, but the expedition doesn’t end here. If there is a lesson to be learned from the duo, it is that following your passion and remaining true to your values eventually leads to success. 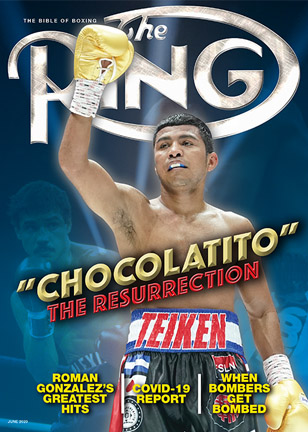 We're all in this together

The great Roman Gonzalez returns to win yet another world title

Voices From the Outbreak

The Long Road to Nowhere

An excerpt from the troubled life of Edwin Valero

When Bombers Get Bombed

Rumble in the Making

Nightmares can be fun!

Recent changes in The Ring's rankings

Boxing around the globe