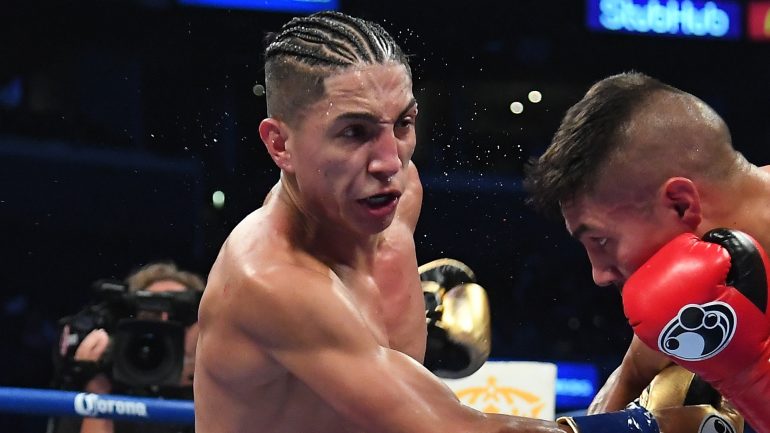 Mario Barrios returns to action in his hometown on February 11.

Barrios will square off against Jovanie Santiago in a 10-round welterweight bout at the Alamodome in San Antonio, Texas. Premier Boxing Champions (PBC) also announced an attractive heavyweight clash between prospects Lenier Pero and Viktor Faust.

Both fights will precede the main event bout between Rey Vargas and O’Shaquie Foster, who are vying for the vacant WBC world junior lightweight title. All three fights will air live on a Showtime Championship Boxing telecast (9 p.m. ET/ 6 p.m. PT).

“Everyone knows I come with everything I got when I step into the ring, and I’m excited to be back for this big opportunity on Showtime,” said Barrios. “I’m even more motivated knowing that I get to fight back at home in San Antonio and give my people a great fight. Everyone is going to see pure boxing entertainment as I’ll be putting my skills on display with bad intentions. I’ve proven that I’m a warrior every time and I’m bringing that same energy for Santiago.”

The 27-year-old has wins over Ryan Karl, Juan Jose Velasco, and Botirzhon Akhmedov, the last being a close decision that many thought Akhmedov did enough to win.

Like Barrios, Santiago (14-2-1, 10 KOs) has lost his last two fights. He has not fought since May 2021, losing by knockout to Gary Antuanne Russell after the sixth round. Over three months before the loss to Russell, Santiago, who resides in Dorado, Puerto Rico, lost by unanimous decision to Adrien Broner.

The winner between Pero and Faust continues down a path towards contender status in the heavyweight division.

Pero (8-0, 5 KOs), who is originally from Camaguey, Cuba and now resides in Miami, Florida, was an amateur standout, representing Cuba at the 2016 Olympic Games. He has a win over Frank Sanchez before turning pro in May 2019.

In his last bout on August 20, Pero scored a vicious first round knockout win over Joel Caudle. The win over Caudle came after a knockout win over Hector Perez on May 7 and a decision win over fellow prospect Geovany Bruzon on January 1 of last year.

Faust (11-0, 7 KOs), who is also known as Victor Vykhryst, is originally from Svitlovodsk, Ukraine and now lives and trains in Las Vegas, Nevada.

In his last bout on December 17, Faust defeated Franklin Lawrence by unanimous decision. The 30-year-old is best known for his slugfest against Iago Kiladze on January 1 of last year, overcoming two knockdowns to drop Kiladze en route to a second round knockout victory.