News reached The Ring that WBA strawweight tilist Knockout CP Freshmart will put his belt on the line against Erick Rosa in Nakhon Sawan, Thailand on March 1.

On paper this looks an intriguing match-up between the experienced champion and the young upstart. Freshmart, who is the longest active reigning world champion in boxing, and Rosa had been on a collision course of over a year. Rosa picked up the interim belt and was subsequently upgraded to the regular champion in 2021.

Last year, when the WBA consolidated their titles, the prospect of Freshmart and Rosa meeting grew closer.

At the WBA convention there was a purse bid, in which both sides took part. The winner was Freshmart’s promoter Petchyindee Boxing Promotions with an offer of $140,000, outbidding Rosa’s backer’s Shuan Boxing ($122,000).

Freshmart (24-0, 9 knockout), The Ring’s No. 1-rated strawweight, was a successful Muay Thai fighter and won a Thai national title as an amateur before turning professional in 2012. 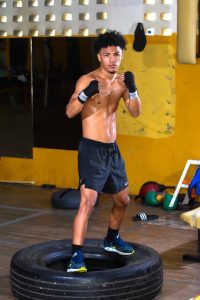 He moved quickly as a professional before annexing the WBA title from Byron Rojas (UD 12) in June 2016. Since then, 32-year-old, whose birth name is Thammanoon Niyomtrong, has made 11 defenses, turning back the challenges of Rey Loreto (UD 12), Chaozhong Xiong (UD 12), Rojas (UD 12), Robert Paradero (TKO 5) and, in his most recent fight, former long-reigning WBC titleholder Wanheng Menayothin (UD 12).

Those wins positioned him to face unbeaten Peruvian Ricardo Astuvilca. Although Rosa was down in the fourth-round, his slick skills saw him win a 12-round unanimous decision. “Mini-Pacman” continued to be moved aggressively, edging former WBO 105-pound ruler Vic Saludar (SD 12) in December, 2021.