Born on this day: Joe Frazier 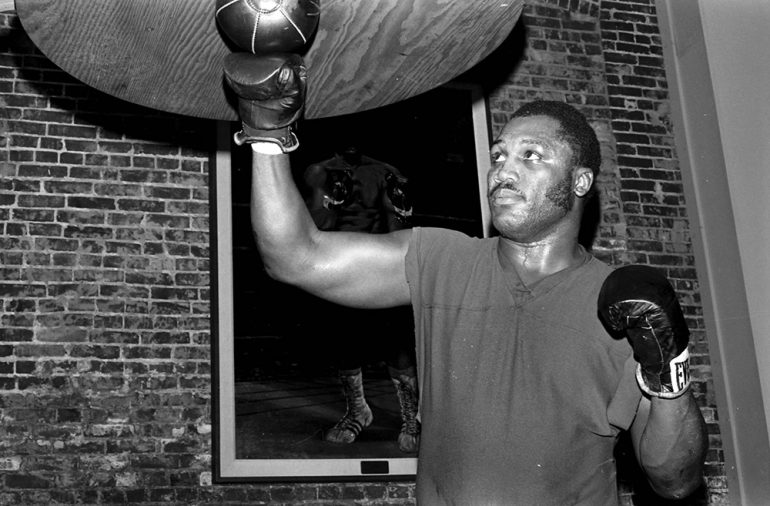 Joe Frazier, seen training in 1974, showed no mercy to the young Holmes in their sparring sessions.
12
Jan
by Diego Morilla

Olympian, world champion, KO artist, and nemesis to The Greatest. The great Joe Frazier was born on a day like today, 78 years ago.

Joseph William Frazier was born on January 12, 1944 in Beaufort, South Carolina. As the twelfth son of sharecroppers, Frazier grew up in poverty and looking for new opportunities in life. That search took him first to New York City and then to Philadelphia.

After a successful amateur career, he represented the US in the 1964 Olympic Games, winning all his preliminary bouts by stoppage before decisioning Germany’s Hans Huber for the gold.

Frazier became a professional prizefighter in 1965, and a training accident left him legally blind in his left eye, which led to the development of his style: a continuous and unpredictable bobbing-weaving movement with a relentless attack, especially using his feared left hook, one of the most formidable examples of that punch ever thrown by a boxer of any weight.

With this style, he first earned his nickname of “Smokin’ Joe” and then earned a number of wins against some of the best heavyweights of the best era that the division has ever seen, such as Jerry Quarry, Oscar Bonavena, Buster Mathis, Eddie Machen, Doug Jones, George Chuvalo, and Jimmy Ellis.

He laid claim to some recognition as a heavyweight titlist in his win over Mathis, but it wasn’t until he defeated Muhammad Ali by unanimous decision in the highly anticipated Fight of the Century in 1971 that he was universally considered as the real heavyweight champion, since Ali’s career and championship hiatus had been caused by his refusal to enroll in the armed forces and not by a ring defeat.

Two years later, Frazier lost his title to George Foreman in Jamaica, and then went on to beat Joe Bugner, lost a rematch to Ali, and beat Quarry and Ellis again.

But his career had one final great fight left.

In a night of sweltering heat in the Philippines, Frazier challenged Ali once again in the brutal rubber match of their storied rivalry, in what became known as the Thrilla in Manila. With his right eye all but closed by Ali’s punches, and his blind left eye still useless, trainer Eddie Futch decided to save his fighter from further punishment and called off the bout to award Ali one of his greatest wins in a fight in which both fighters cemented their already lofty place in boxing history.

Frazier retired in 1976 after losing to Foreman again, and after a short-lived comeback in 1981 he finally retired with a record of 32 wins, 4 losses, and 1 draw, with 27 knockout wins.

Aside from being one of the most feared punchers of his time, Frazier found time to tour as a singer with The Knockouts, his backing band, and to train his son Marvis among other fighters in his world-renowned gym in his adoptive city.

Frazier was diagnosed with liver cancer in 2011 and died of complications from the disease later that year. He had been inducted into the International Boxing Hall of Fame as part of the inaugural class of 1990.