The Ring’s 2022 Awards Nominees: Fight of the Year 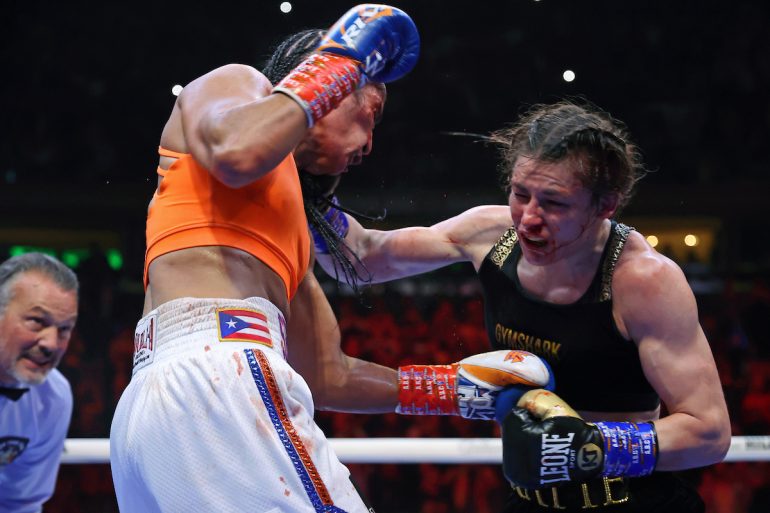 The Katie Taylor-Amanda Serrano lightweight championship was high-level action from start to finish. Photo by Ed Mulholland/ Matchroom
10
Jan
by The Ring

The Ring has selected a Fight of the Year since 1945, when the award went to Rocky Graziano–Freddie Cochrane (Graziano scored a come-from-behind KO in the 10th and final round). The popular middleweight slugger would be one-half of the next two awards (both vs. Tony Zale) in 1946 and 1947. Zale, the great middleweight champ who edged Graziano in their trilogy, was on the losing side of the 1948 Fight of the Year when he lost the title to French-Algerian idol Marcel Cerdan via 12th-round stoppage.

Rocky Marciano was part of three consecutive Fight of the Year awards (1952-1954), vs. Jersey Joe Walcott (TKO 13 for the heavyweight title), Roland LaStarza (KO 11), and Ezzard Charles (KO 8). Welterweight and middleweight champ Carmen Basilio was involved in FIVE consecutive Fight of the Year awards (1955-1959), vs. Tony DeMarco (KO 12 in a rematch defense of the welterweight crown), Johnny Saxton, Ray Robinson (in consecutive bouts for the middleweight title) and Gene Fullmer.

Muhammad Ali participated in an amazing SIX Fight of the Year awards (1963 vs. Doug Jones, 1964 vs. Sonny Liston for the heavyweight crown, 1971 vs. Joe Frazier in the Fight of the Century, 1974, vs. George Foreman in the Rumble in the Jungle, the 1975 Thrilla in Manila rubber match with Frazier, and 1978 vs. Leon Spinks).