The Ring’s 2022 Awards Nominees: Comeback of the Year 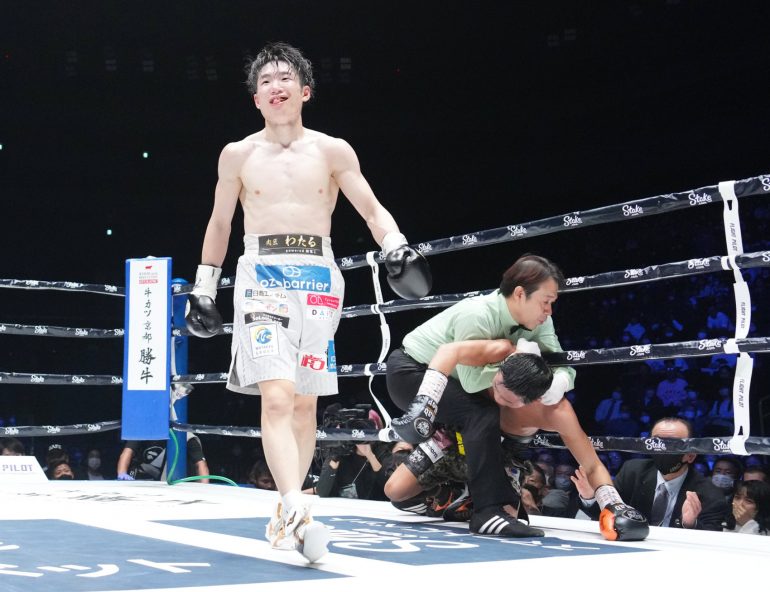 Kenshiro Teraji scored the biggest win of his accomplished career by stopping Hiroto Kyoguchi for the Ring/WBC/WBA 108-pound championship. Photo by Naoki Fukuda
09
Jan
by The Ring

The Ring’s Comeback of the Year award began in 1980 with seemingly faded former flyweight titleholder Shogi Oguma, a tough veteran who had lost SIX title shots during the 1970s (including three to Mexican hall of famer Miguel Canto and two to Venezuelan legend Betulio Gonzalez). However, in May 1980, Oguma upset undefeated WBC/Ring champ Chan Hee Park by ninth-round KO and defended the titles twice that year (split decisions versus Sung Jun Kim and Park). 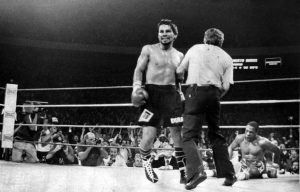 Duran decks Moore en route to picking up a third world title in as many weight classes. Photo by Ring Magazine/ Getty Images

Roberto Duran won the honor twice during the 1980s, in 1983 for his upset stoppage of WBA 154-pound Davey Moore and going the 15-round distance with Marvin Hagler, dropping a close and competitive decision to the undisputed middleweight champ, and again in 1989 when he lifted the WBC middleweight title from Iran Barkley (the 1989 Fight of the Year).

George Foreman won the 1994 honor when he stopped Michael Moorer to become history’s oldest heavyweight champion (at age 45). Grizzled junior welter/welterweight fringe contender Vince Phillips won it in 1997 by upsetting Kostya Tszyu for the IBF 140-pound strap, which he defended against Micky Ward and Freddie Pendleton before the end of the year. Tszyu earned it in 1998 by bouncing back with wins against Calvin Grove, Rafael Ruelas and Diosbelys Hurtado. James Toney, thought to be overweight and finished as a cruiserweight, earned it in 2003 by upsetting both Vassiliy Jirov (for the IBF title) and Evander Holyfield (at heavyweight).

Kenshiro Teraji – The Japanese veteran considered retirement after losing his WBC 108-pound title to unheralded Masamichi Yabuki via brutal 10th-round stoppage in September 2021.  However, The Amazing Boy lived up to his nickname in 2022, smashing Yabuki in three rounds in March and then halting former amateur rival Hiroto Kyoguchi in seven rounds to unify WBC and WBA straps and earn The Ring junior flyweight championship.

Ryan Garcia – The talented young lightweight contender missed most of 2021 as he dealt with mental health issues but rebounded in 2022 with victories over Emmanuel Tagoe and Javier Fortuna, setting up a potential superfight with Gervonta Davis in April.

Juan Francisco Estrada – Injuries and illness kept The Ring’s junior bantamweight champion out of the ring for 18 months (resulting in being dropped from the magazine’s pound-for-pound rankings), but the future hall of famer returned to form in 2022. Following a rust-shaking decision over Argi Cortez in September the Mexican technician scored the biggest victory of his career, a majority decision over all-time great Roman Gonzalez in December.

Rey Vargas – Boxing politics kept the former 122-pound titleholder sidelined long enough (only one bout during a 36-month span) for most fans and media to forget why he’s undefeated but the rangy thinman put on one of his best performances against defending WBC featherweight beltholder Mark Magsayo, who he outclassed over 12 rounds in July.