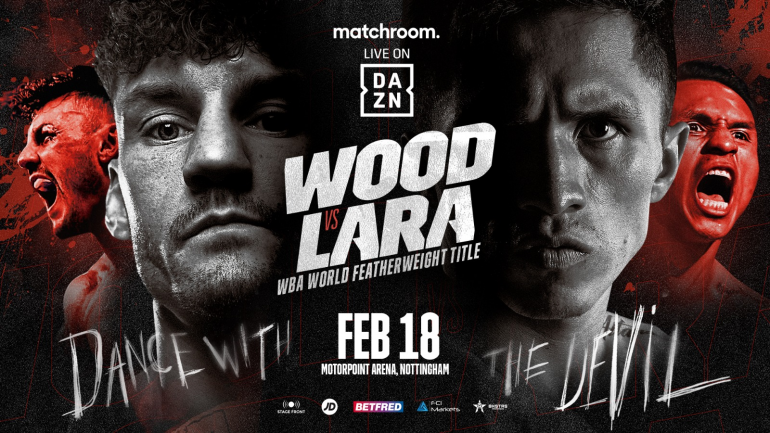 Leigh Wood will put his WBA featherweight title on the line against fellow-puncher Mauricio Lara at Motorpoint Arena in Nottingham, England, on February 18, Matchroom Boxing announced on Monday.

Wood and Lara had originally been tabbed to meet on September 24, however Wood suffered a torn bicep in training that forced the postponement of the fight.

“Mauricio Lara has made things personal between us with the disrespect he showed me regarding my injury and my country,” Wood (26-2, 16 KOs), The Ring’s No. 6-rated featherweight, said in a press release. “I’m going to show him what I’m all about. See you on February 18, Nottingham – And Still!”

The Mexican contender, who is rated higher than Wood in The Ring’s rankings (at No. 4), is anxious to finally get a crack at a world title.

“I have been waiting for this opportunity for two years and I am not going to waste it,” said Lara (25-2-1, 18 KOs). “In February 2021, I beat [Josh] Warrington in England. Now in 2023, I will do the same with Wood. The WBA 126-pound world title goes to Mexico, that I promised to my daughter, my family, my team and to my whole country. Your time has come Leigh Wood, no ‘injury’ can save you now from this.”

Wood had been a 10-year pro when he claimed the vacant British title at the expense of Reece Mould (TKO 9). That triumph vaulted him into a fight with Chinese punching machine Xu Can, who Wood shockingly upset by final-round stoppage. The 34-year-old proved that was no fluke by getting off the canvas early to roar back and stop Michael Conlan (TKO 12) while trailing on all three scorecards in one of the best fights of 2022.

Lara was unknown when he was handpicked to face the then-unbeaten Warrington in February 2021. The Brit tried to warm himself into the fight, but the Mexican swung for the fences and caused considerable damage. After dropping Warrington in the fourth round, Lara poured on the aggression and scored a ninth-round knockout. The two met in a rematch but a clash of heads led to an inconclusive no-contest ruling in Round 2. The 24-year-old has stayed active, scoring a pair of third-round stoppages while waiting for something bigger to come along.

Wood-Lara, plus its undercard, will be broadcast live on DAZN.