If Hector Garcia didn’t catch your eye in 2022, he says you’ll know him after he beats Gervonta Davis 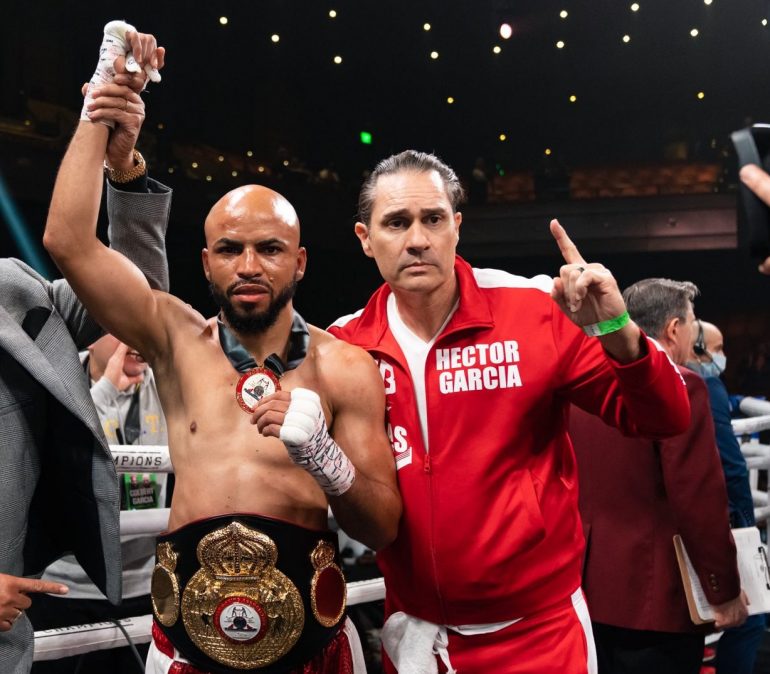 Hector Luis Garcia prides himself on his stoic demeanor. The 31-year-old from the Dominican Republic had an amazing 2022. The savvy southpaw likes the fact no one thought he could beat previously undefeated Chris Colbert, who he nearly shutout in February, and followed with a WBA 130-pound title winning victory over grizzled Roger Gutierrez in August.

“What we’ve already done training, we have a Plan A, Plan B, Plan C. I’m ready to show the world who I am,” Garcia told The Ring last week in an exclusive one-on-one, translated by Diana Santos, the wife of Garcia’s trainer, Bob Santos. “I want to show everyone all my capabilities. I know people underestimate me. I like that. I wanted to get the opportunity to demonstrate everything that I’m able to do against my rival. Southpaws are easy to decipher when you’re left-handed going against someone left-handed.

“I trained in California with Bob, during Christmas away from my family. I want to demonstrate who I am, which I think I did last year by beating those guys. I know I can do it. I’m going to continue doing what I’ve been doing. The pressure is going to be on Gervonta, not so much on me, because I don’t feel any pressure coming into this fight.

“I’m not even thinking about losing. I never expect to lose going into any of my fights. In my mind, I don’t even think about losing, because I don’t like to lose at anything. I’m going in with the mindset of win-win. I didn’t even get to celebrate Christmas. I’ll do that after I beat (Davis).

“Yes, I like being the underdog. I always like going into every fight with the underdog mindset.”

Bob Santos, who like his fighter had a great 2022, feels strongly that his fighter can win. Garcia, Santos warns, is a lot tougher than Davis and the boxing world knows.

“There’s no two ways in my mind about that,” Santos said. “I’ve said it verbatim in Showtime’s ‘All-Access’ that obviously Tank has the power to change the fight with one punch. He has that ace up his sleeve like Deontay Wilder, and so on and so forth, but Tyson Fury was able to counter that, and beat him. Wilder is obviously a bigger puncher than Fury and a quicker athlete. That being said, with Hector Luis’ amateur background, fighting fighters from all over the world, he’s seen everything under the sun. If Tank doesn’t land that home run punch, he’s going to be in a whole lot of trouble.

“It’s not going to be a difficult fight to me. Tank is going to have to have the fight of his career. If Tank can’t put him out, he’s going to be in for a world of hurt from this guy. If you go back and look at the 2016 Olympics, Hector should have medaled in that Olympics. The guy has been getting over his whole life. He’s fought all the Russians, the Cubans, and in the 2016 Olympics, he should have medaled representing the Dominican Republic. Everyone (within the world amateur scene) knows how good Hector is.”

Garcia came straight from the mud of the Dominican Republic. He was raised hard by an old-school father who was a strict disciplinarian that shaped his son under an iron but caring hand.

“If Tank can’t hit us with something big, he’s in for the fight of his life,” Santos reiterated. “On the other side of that, we know we can’t make any mistakes. We can’t give Gervonta that open opportunity to land that uppercut or straight left. He’s able to be outboxed, and Hector has all the skills to do it. We’re not intimidated by Davis. And maybe Davis is looking past us. We’ll see.”

Davis was looking at some possible legal entanglements when he was arrested in Parkland, Florida, on Tuesday afternoon, December 27, for allegedly striking the mother of his daughter. The woman he allegedly struck has publicly recanted her allegations on social media. Davis, however, does face a scheduled court appearance on February 16 in Baltimore Circuit Court for allegedly leaving the scene of a car accident that occurred during the overnight hours of November 5, 2020, involving four people, one of whom was pregnant at the time.

“I don’t think he has lost focus because I’ve seen him continue with his great training and the way he has continued working, just like he has before,” Garcia said during his open workout earlier this week. “He’s a great fighter for a reason. And I know that he’s gonna want to represent his country and his city, just like I do.”