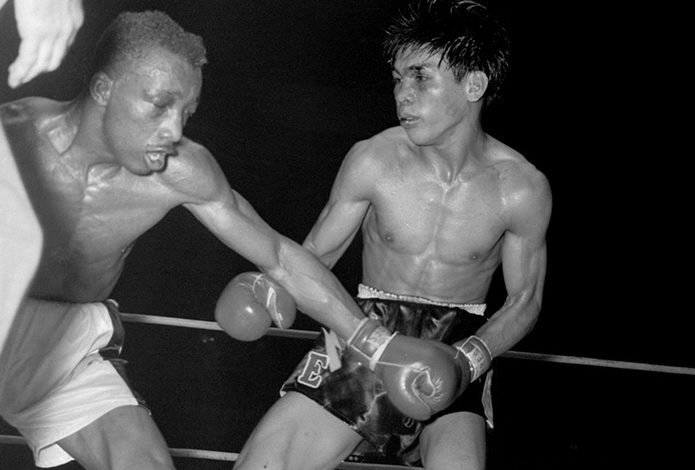 Featherweight champ Sandy Saddler reaches to the canvas for his mouthpiece in the eight round as challenger Gabriel (Flash) Elorde of the Philippines moves in. Ref. Ray Flores also reached for the elusive mouthpiece. Saddler opened Elorde's eye causing the title tilt to be stopped in the 13th round at the Cow Palace.
02
Jan
by Diego Morilla

He was a tough, non-stop southpaw fighting machine, and quite possibly the greatest Filipino fighters of all time not named Manny. The great Gabriel ‘Flash’ Elorde left us on a day like today, 38 years ago.

Gabriel Elorde was born on March 25, 1935 in the town of Bogo, Cebu. He was the youngest of 15 children in a poor family, and soon enough he dropped out of school to take on a number of low-paying jobs to support his family.

He became a fighter in his early teens, and made his professional debut at the age of 16 on June 1951. Within a year he was already a national champion and one of the country’s top prospects, a two-fisted assassin with a devastating body attack.

By 1955 he already had a few more titles under his belt and a win over all-time great Sandy Saddler, and was inching closer to a world title opportunity. The first one came on the following year in a Ring title bout against Saddler himself, with Elorde losing on cuts in 13 rounds.

After several years of campaigning as a lightweight, Elorde finally dropped a few pounds to lay claim to his first world title when he defeated Harold Gomes in seven rounds, becoming the first Filipino world titlist in 20 years after the great Ceferino Garcia lost his share of the middleweight belt back in 1940.

Defending his NBA (later WBA) version of the belt on three occasions, Elorde would finally become undisputed Ring champion (and inaugural WBC beltholder in this category) in 1963 with a win over Johnny Bizarro in Manila.

Elorde would defend that unified crown on five separate bouts, finally losing them to Japan’s Yoshiaki Numata in 1967, thus becoming the longest-reigning 130-pound titlist ever. During his reign, he also moved back up to lightweight on two occasions to challenge Puerto Rico’s Carlos Ortiz for the Ring belt in that division, losing by stoppage on both fights.

Elorde was one of the first sports superstars in his country, and after his retirement he became a spokesperson for several top brands. His sons Gabriel Jr., Marty and Johnny have been involved in the boxing business as promoters and managers, and they have also succeeded in creating a gym franchise across the country.

Elorde died of lung cancer on January 2, 1985 at the age of 49, partly due to his smoking habit. In 1993, he became the first Asian fighter to ever being inducted into the International Boxing Hall of Fame.