Joshua Franco: I do think Ioka is my toughest test to date 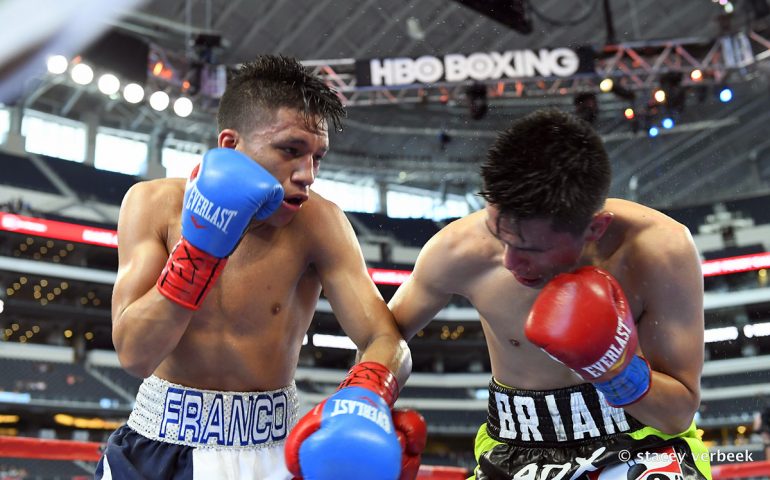 Joshua Franco has come a long way since suffering the only loss of his pro career in March 2018.

After that loss, Franco worked to get into contender status and would later win a world title belt. A win Saturday night in a unification fight could put Franco at the top of a talent-laden junior bantamweight division.

The 27-year-old Franco will put up his WBA world title belt against WBO world titleholder Kazuto Ioka at the Ota-City General Gymnasium in Tokyo, Japan. The fight will air live throughout Japan.

“(From being here this past week), the difference about fighting in Japan is the time difference and environment,” Franco told The Ring Wednesday evening. “Overall, he’s a good fighter. He’s a patient fighter. I do think he’s my toughest test to date, but I will be able to tell more once I’m in there with him.”

At Friday’s weigh-in, Franco weighed in at 114.75 pounds. Ioka initially weighed more than 115-pound limit, stripped, and was able to make weight by coming in at 115 pounds.

The clash between Franco and Ioka will be a compelling one, pitting two of the best fighters in the division against each other. Ioka and Franco are ranked No. 2 and No. 5, respectively, by The Ring.

Franco (18-1-2 1 ND, 8 knockouts), who resides in San Antonio, Texas, has not fought since August 14 of last year, defeating Andrew Moloney by unanimous decision. The victory over Moloney followed a no-decision and another win over the Australia-based Moloney.

He will face a fighter in Ioka who has won his last six fights and has successfully defended the WBO title in his last five bouts, defeating the likes of Aston Palicte, Kosei Tanaka, Francisco Rodriguez, Jr. and, in his last bout on July 13, Donnie Nietes.

Franco has mostly fought away from his hometown and Saturday night will be no different, facing Ioka in his hometown of Tokyo.

Part of the reason for Franco’s long delay to the ring was a proposed fight against Ring Magazine champion Juan Francisco Estrada that fell through. Estrada held the WBA world title, while Franco held the sanctioning body’s secondary titleholder. Earlier in the year, the WBA allowed for the rubber match between Estrada and Roman ‘Chocolatito’ Gonzalez as long as the winner defended the title against Franco.

Both Estrada and Gonzalez tested positive for COVID-19 earlier this year, further delaying the rubber match until this past December 3, which Estrada won. In a ruling made this past August, the WBA ‘relieved’ Estrada of the world title, elevating Franco to full titleholder status.

Franco was disappointed a fight never got made against Estrada, but is open to a fight against him in 2023.

“I was disappointed but that’s boxing and things happen sometimes,” said Franco, who used to be promoted by Golden Boy Promotions. “I will see him soon.”

This plan had always been in the works and both brothers will attempt to make history in unifying their respective weight classes.

“My brother wants to be great and win another (world) title at 112 (pounds) before taking over the divisions above,” said Franco. “Which also gives me time to secure some big fights for myself. It works out perfect.”

Franco and Rodriguez have benefited from the tutelage and knowledge of trainer Robert Garcia, who has worked with both since their respective pro debuts. Both train at Garcia’s gym in Riverside, California, where they spar against other world titleholders, contenders, and prospects.

Through peaks and valleys, Garcia has guided Franco to this point in his career and Franco attributes his success to the tough sparring sessions and wisdom provided by Garcia.

“Robert has been there for me since the beginning. Ever since then, our relationship has grown, inside and outside of the ring. (He has) had a big impact on me because he’s always looking out for me and my brother and making sure we’re always doing good and doing right.”

Saturday’s clash against Ioka will be a significant test for Franco, who has stated he has always wanted to face the toughest competition in the division. Unifying the division will be difficult, given the talent in the division, including IBF world titleholder Fernando Martinez of Argentina.

Franco will have his hands full against Ioka, but a statement win against Ioka will signify his worth and could demonstrate his standing of being the best in the division.

“A win on Saturday would mean the world to me, personally, because I’ve been waiting to fight for over a year. Professionally, it means a lot because I get bigger and better fights.”