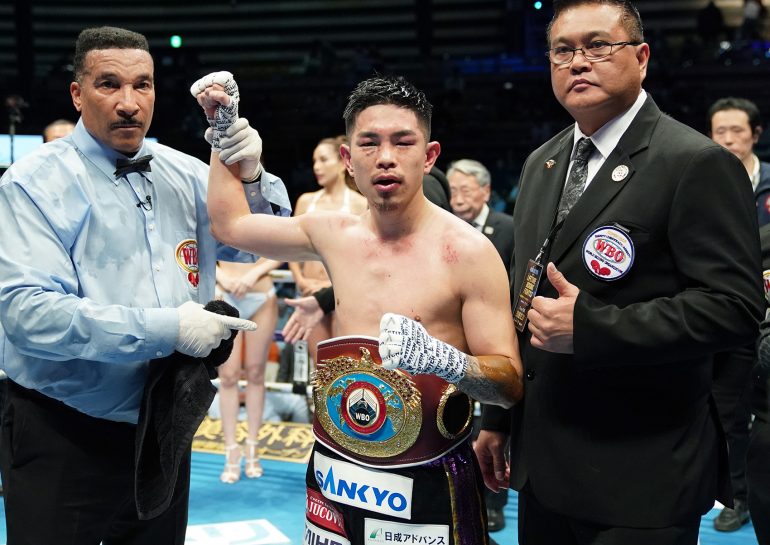 WBO junior bantamweight titleholder Kazuto Ioka dominated former rival and fellow four-weight beltholder Donnie Nietes in their rematch in July. Afterwards the Japanese veteran let it be known that he hoped a title unification showdown would be next.

His team was able to deliver, brokering a deal with WBA counterpart Joshua Franco. The two will meet on Saturday at the Ota-City General Gymnasium in Tokyo.

“It will be a big opportunity,” Ioka told The Ring. “I have always said that I will unify the four belts in the junior bantamweight division. This will be the first step.”

Ioka, who at 33, is six years older than Franco,The Ring’s No. 5-rated junior bantamweight, believes his experience will play a big part in the fight.

“He does everything very well,” said Ioka, who will be taking part in his 23rd world title fight. “I think he is a very aggressive and a smart fighter but I will not know what to exploit until we are in the fight.

“He has fought in great fights in his career and he has earned his right to fight in this big unification bout.”

However, this will be Franco’s first fight in 16 months, far from ideal preparation for the biggest fight of his life. Ioka knows all about that having stepped away from boxing from April 2017 until September 2018.

“I think for any boxer it is always a challenge when you take long period off,” he said. “But we won’t know until he is in the ring how he is going to do. For me, when I came out of retirement, I was in Los Angeles against [McWilliams] Arroyo and remember being really excited. But it took a few rounds to get back.

“Most of us box [from a] young age so we can’t forget how to box in 16 months. I expect him to be at his best, that is why he is a champion.”

It also marks the first time Ioka has been able to train with Ismael Salas since the start of the COVID pandemic.

“Getting direct training from him in person and coming out to Las Vegas without my family is a great commitment,” said Ioka, who began camp in late October. “I went there to perfect the entire system in this unification bout. Training with Salas, I have begun to clean up everything I need to be perfect.”

At the WBO convention in Puerto Rico in late October, it was announced that the winner of Ioka-Franco will have 180 days to face former WBO flyweight titleholder Junto Nakatani. Ioka wouldn’t be drawn on the subject.

“I’m focused on just one thing, that is to win this fight to unify,” he said. “Then my priority will be to unify all the belts at 115.”

Franco (18-1-2, 8 KOs) turned professional in 2015. The Texan was highly regarded before being upset by Lucas Emanuel Fernandez Leone (TKO 9) in March 2018. He became more battle-hardened, sharing 30 grueling rounds with Oscar Negrete (D 10, SD 10 and D 10). That experience served the 27-year-old well when he beat Andrew Moloney two out of three times (UD 12/ ND 2/ UD 12). As WBA “regular” titleholder, he waited patiently to face Estrada, but, when that didn’t happen, the WBA stripped the Mexican and promoted Franco to full world titleholder.